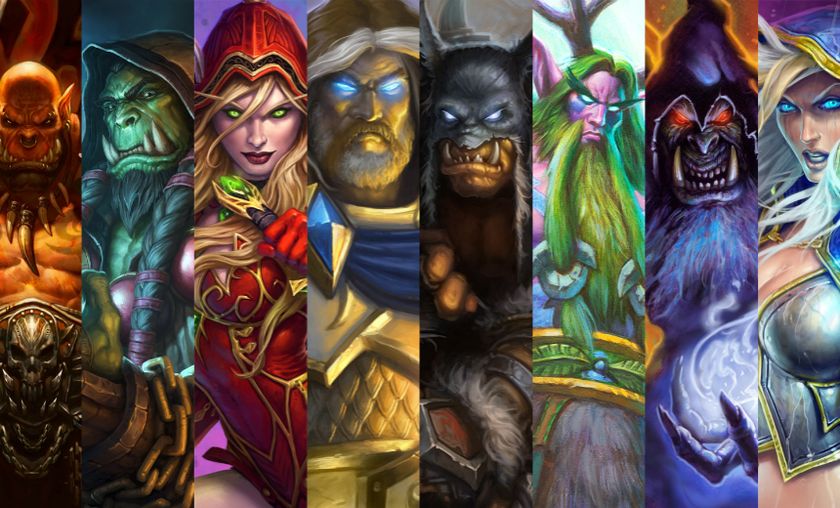 The arrival of the next expansion, Whispers of the Old Gods, is upon us. Come Tuesday, 134 new cards will be added to Hearthstone, alongside 12 card changes Blizzard has announced. A lot of classes lose powerful cards with the upcoming Standard mode. [card]Mal'Ganis[/card], [card]Shielded Minibot[/card], [card]Shieldmaiden[/card] are just few examples of the many popular class cards that will no longer be available in standard. However, the Old Gods bring new friends (as far as they have friends) with them to the tavern.

Although we still have to wait a few more days before the actual experimentation can begin, theorycrafting is something nearly all Hearthstone players love to do, and our editorial crew are no exception. Influenced by the Old Gods' whispers, each of our editors has picked a deck they think will become strong when Standard arrives, and explains why they think this deck will dominate the game.

(This excludes NoMLiX's very inventive answer of "Aggro Shaman". We were looking for renewed/new decks, Jan. But thanks, as always.)

Let us know in the comment section which deck you think will be strong!

Shaman looks to be among the big winners of the Old Gods. [card]Master of Evolution[/card] and [card]Thing from Below[/card] are both kings of value when it comes to midrange builds. Add to them [card]Hallazeal the Ascended[/card] – the much needed burst heal that the Shaman class needed – and I can easily see Thrall successfully exploring the midrange/control style he used to run back in the early days of Hearthstone. The exile of Naxx and GvG means nothing to Shamans and they already got powerful cards in recent sets ([card]Totem Golem[/card], [card]Tuskarr Totemic[/card], [card]Tunnel Trogg[/card]), so I foresee a power spike come the Old Gods.

The evolution theme is new to the class, but sounds incredibly potent on paper. A card like Master of Evolution will not only upgrade a minion, but also heal it in the process. The cheap [card]Evolve[/card] does it, too, and board-wide to that, which translates to growing, durable board presence, which is exactly what a midrange deck requires. Unfortunately, nothing will replace the good old [card]Crackle[/card] (sorry, [card]Stormcrack[/card]), but there’s still plenty of reach damage in Shaman to make it capable of killing you from nowhere.

Strong minions such as [card]Flamewreathed Faceless[/card] and [card]Master of Evolution[/card], combined with the traditional Shaman removal package, should make Control Shaman a very strong deck in the new Standard meta. Aside from the aforementioned new cards which strengthen the Shaman's curve and allow for some insane value plays, Shamans profit massively from the adjustments Blizzard has made to the Classic set.

While [card]Big Game Hunter[/card] was nerfed to five mana, [card]Hex[/card] remains untouched. Many of the new endgame bombs come with strong Deathrattles (such as Deathwing, Dragonlord), which are negated by Hex; even more devastatingly for the Shaman’s opponent, a [card]Hex[/card]'d [card]C'Thun[/card] cannot be brought back into the game by [card]Doomcaller[/card], effectively removing your opponent’s win condition for good.

The challenge with Control Shaman will be choosing which 30 cards you want to go with. Shamans are spoiled for choice here, with [card]Evolve[/card], [card]Stormcrack[/card], [card]Eternal Sentinel[/card], [card]Flamewreathed Faceless[/card], [card]Master of Evolution[/card] and [card]Thing from Below[/card] all making good additions to the deck. With the Control Shaman shell already claiming 18 to 20 spots in the deck, there are some tough decisions players need to make. I don’t know about you, but I know what I will be experimenting with next week!

I made the mistake of underestimating Paladin once, and I am not going to do so again. My choice of deck post-Standard is aggressive Paladin/Secret Paladin. [card]Knife Juggler[/card] survived the massacre, albeit not unscathed. [card]Divine Favor[/card] also stands unchanged (Blizz plz!).  It's true that a lot of the old Paladin is gone, but we can now see the replacements. [card]Selfless Hero[/card] would be beating Leper Gnome in hyper aggressive decks for its spot even before the nerfs. Now it is just a matter of finishing what he started, and she will likely also see some play in midrange as well.

[card]Rallying Blade[/card] has finally provided Paladin with a tool to deal 3 damage at a reasonable mana cost, and its upside has the potential to be massive too. This card would not need Standard to beat [card]Coghammer[/card]. [card]Steward of Darkshire[/card] is another card I predict will see use: It's weak on her own but with incredible synergy, and Paladins should have the tools to protect her, with Selfless Hero and [card]Noble Sacrifice[/card]. The latter cards also receive the buff from the Steward herself.

To round things off I have a sleeper card to mention for aggressive Paladins: [card]Twisted Worgen[/card]. It helps ease the loss of two-drops where few replacements were given. It trades reliably into any two-drop without fearing removal and synergizes amazingly with Steward of Darkshire. It will be good, as will aggressive Paladins.

After a year spent strengthening the Paladin class from the top-down, poor Uther and his new lady friend are losing the most in the Standard rotation. However, their un-corrupted additions from the Old Gods are some of the best solutions against the eponymous deities, and might offer some highly effective means for fast and heavy board stickiness.

There’s a great collection of synergistic, divine shield-centric cards and a gracious increase in one-drops; the difficulty is actually thinking of a deck archetype that uses all these elements wisely. Most signs point to a revival in Token Paladin, where minions are summoned in bulk to be buffed-up further. [card]Stand Against Darkness[/card] is laughably meek on its own, but combining it with [card]Steward of Darkshire[/card] and [card]Rallying Blade[/card] would allow for a subtly effective use of [card]Divine Strength[/card].

The recovery solutions in [card]Forbidden Healing[/card] and Ragnaros, Lightlord also mean that aggro decks have their work cut out for them, especially with their nerfed [card]Ironbeak Owl[/card] and [card]Big Game Hunter[/card]. Whilst the new Paladin cards in general suggest more possibility than promise, I think it won't be as long as previously thought before a groan-worthy, tier-1 deck is reporting for duty.

Or Ramp Druid. Or Wall Druid. Call it whatever you want, chances are those will all turn out to be the exact same thing. Most of this deck will probably build itself. First off, you’ll need [card]C'Thun[/card] (duh!) alongside some of its early game support cards, namely [card]Beckoner of Evil[/card], [card]Disciple of C'Thun[/card] and [card]Twilight Elder[/card]. Then you put in the good stuff with the powerful support cards – [card]Klaxxi Amber-Weaver[/card], [card]Dark Arakkoa[/card] and [card]Twin Emperor Vek'lor[/card] – and you’re done with the C’thun-side of things.

Now, because this is Druid and you’re ramping, you’ll want all the good ol’ ramp and wall things: [card]Innervate[/card]s, [card]Wild Growth[/card]s, [card]Druid of the Claw[/card]s, one or two [card]Ancient of War[/card]s and maybe even [card]Soggoth the Slitherer[/card]. Then you put in [card]Swipe[/card]s, [card]Wrath[/card]s and maybe [card]Living Roots[/card] for removal and you have the last couple of slots to play around with some of the shiny new toys: [card]Mire Keeper[/card] looks really good on paper, so include one or even two. [card]Fandral Staghelm[/card] seems powerful, opened that guy in a pack? In the deck he goes. Now it’d be great to support him with more “Choose one” cards – [card]Nourish[/card] and [card]Starfall[/card] come to mind, both are conveniently playable on five mana, right after you dropped Fandral.

Once built correctly, this deck will probably be rather easy to pilot, but I for one am still sure to give it a go. Who doesn’t want to drop big dude after big dude before eye-balling an opponent to death, right?

Tempo mage will lose some strong cards when Standard hits. One of the biggest losses to Mage in general is [card]Mad Scientist[/card], which provided the value of 5 mana in a two-cost minion. Although there's always [card]Kirin Tor Mage[/card], I do not see Secrets continuing to exist in Tempo Mage. Instead, I see the deck becoming more minion-based.

[card]Flamewaker[/card] has been one of the core minions in the deck, alongside [card]Mana Wyrm[/card], as those two cards have strong offensive spell synergy. With the Old Gods being introduced, Flamewaker's slightly more expensive cousin [card]Demented Frostcaller[/card] will provide some more board control too. It synergizes extremely well with cheap spells ([card]Arcane Blast[/card], [card]Arcane Missiles[/card]), and allows you to freeze the enemy's board so that you can keep bashing your opponent's face. There is even more synergy found with cards such as [card]Ice Lance[/card] and [card]Shatter[/card], which is not only a 3 mana [card]Assassinate[/card], but also triggers your Mana Wyrm, Flamewaker and Frostcaller.

Another card synergy I'm excited about for the deck is with [card]Brann Bronzebeard[/card] and cards like [card]Twilight Flamecaller[/card] (a powerful card, which can be seen as a 1 mana 2/2 that casts an [card]Arcane Explosion[/card] for you), [card]Azure Drake[/card] and [card]Ethereal Conjurer[/card]. The last minion I hope to see in the deck is Mukla, Tyrant of the Vale. Whereas I previously thought the card wasn't interesting, the addition of Demented Frostcaller to the game leads me to believe Mages might just go monkey-mode!