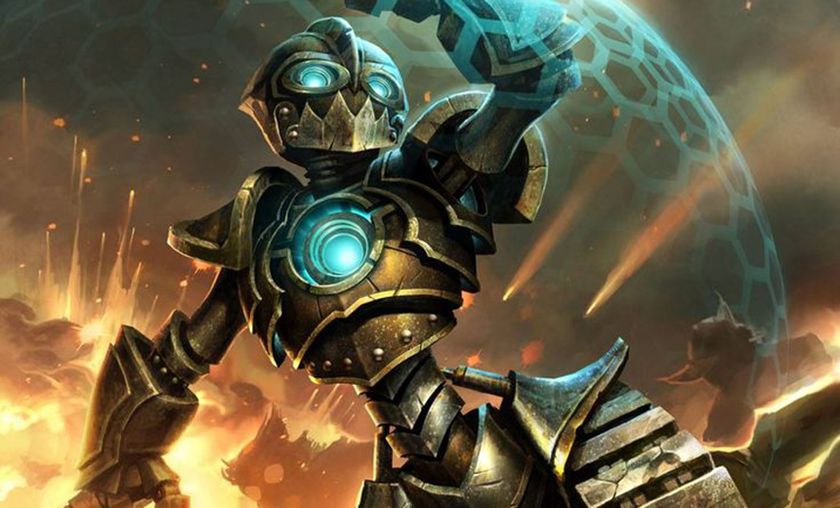 So, the new standard is around the corner. Come spring, Goblins vs Gnomes and Curse of Naxxramas will be out of the new format as Hearthstone experiences its biggest change to date. 153 collectible cards will be rotated out, only available to the “wild” format. Competitive Hearthstone will only be reduced to the basic and classic sets as well as the expansions from the last two calendar years.

Below, we order the classes of Hearthstone depending on what they will lose come standard, building up to the biggest loser. Let’s get started.

What they are losing: Nothing.

I’m serious: There is no staple Druid class released in Naxx and GvG and the current competitive decks are composed primarily of classic and basic cards with some help from BRM and LoE. The skeleton of the class will remain in standard: [card]Innervate[/card] and [card]Wild Growth[/card], [card]Swipe[/card], [card]Savage Roar[/card], [card]Force of Nature[/card] and [card]Keeper of the Grove[/card] are but a few examples.

That said, don’t expect Druid to be untouched. Blizzard has already stated that they are looking to adjust the power level of core Druid cards and it’s very likely that cheap win conditions like [card]Savage Roar[/card] will undergo revision. As it stands, however, Druid is the least affected class from the rotation. 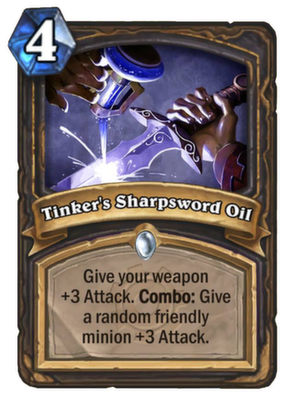 This is a tough loss, but it won’t be as damaging to Rogue as you might think. While they will have to say goodbye to one of its primary sources of burst damage, Rogues will still have centerpiece cards to help OTK builds. [card]Blade Flurry[/card], [card]Sprint[/card] and their single target removals remain untouched. Not to mention that the rotation of neutral damage mitigators such as [card]Sludge Belcher[/card], [card]Antique Healbot[/card] and [card]Loatheb[/card] give an indirect boost to combo decks.

Granted, Oil Rogue won’t be a thing anymore but I’m confident old miracle might make a return. It all depends on what the class gets with the spring expansion but I’m optimistic for Valeera’s future. 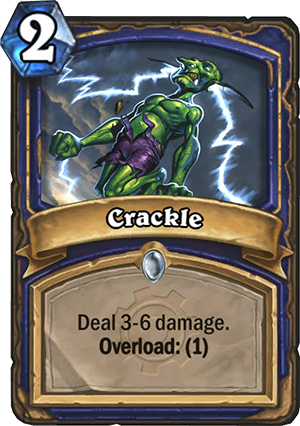 Shaman didn’t have so much firepower that it could afford to lose some. Crackle might be just one card, but it’s an important source of direct damage in all Shaman builds. With an average of 4.5 damage that can bypass taunt and hit face, Crackle’s burst represents almost one sixth hero’s maximum life points, which is an aggro player’s dream. For all the punches aggro Shamans could pull throughout the game, they relied on reach spells like [card]Lava Burst[/card] and the card in question to seal the game. Losing one is a big hit.

Although Neptulon has largely disappeared due to the unpopularity of midrange Shaman, it's still a void to be filled in the future if the archetype resurges. Powermace, while strong, loses a lot of its relevance due to the fact that mechs are mostly gone as an archetype either way. 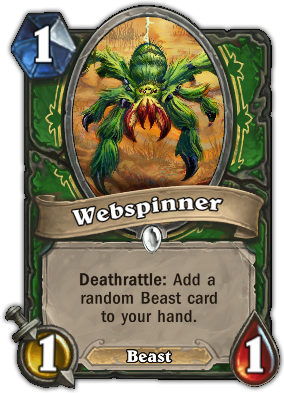 To be perfectly honest, Hunters are mostly damaged by the rotation of certain neutral minions like [card]Haunted Creeper[/card] and [card]Mad Scientist[/card], but since this is an article all about class cards, we’ll stick to the aforementioned two.

Even when looking at those two, however, Hunters are not in a great position. Webspinner is the go-to 1-drop in midrange Hunters which provides additional card draw and Glaivezooka is a vital 2-drop removal/damage boost omnipresent in aggro builds. They fill the curve nicely and provide exactly what their respective builds need.

Still, I am not too worried. Face Hunter will persist even without its 2-mana weapon, especially now that a lot of defensive cards are going away, and losing some 1-drop is the last thing that will determine the future of midrange Hunter.

I deliberated long and hard how to arrange #5 and #4 on the list. Ultimately, I decided to go for Priest before Mage here, and here’s why. 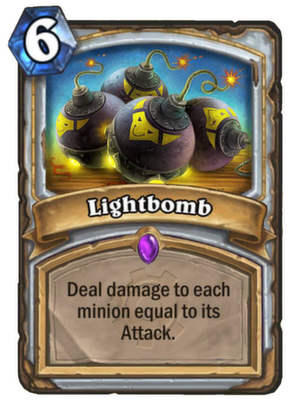 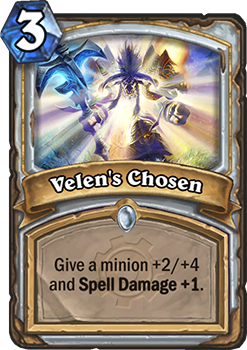 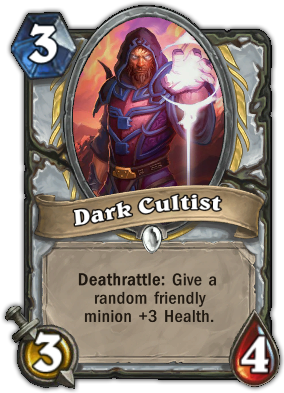 It cannot be argued that Lightbomb and Velen’s Chosen are critical losses for the class. Respectively, they are class’ most efficient board clear and one of its highest value/tempo plays available. Velen’s Chosen in particular is played in almost every Priest deck, from the more midrange-y Dragons to the heavy controls with [card]Deathlord[/card]. It’s without a doubt the class that will be mourned longer.

But here’s the thing: Lightbomb’s primary purpose was to deal with [card]Dr Boom[/card] and Secrets Paladin (there are other ways to deal with aggro, which are still in the game, like [card]Holy Nova[/card] and [card]Excavated Evil[/card]), none of which will be a threat in the new format. They keep their most important single target removal in [card]Entomb[/card] and can still do the Auchenai/Circle combo for board clear. Velen’s Chosen and Dark Cultist have left a big void on the 3-slot but I believe that will be promptly addressed in the spring expansion (if not, Priest will move up the list significantly).

Mages are taking huge losses, across multiple archetypes, which takes away a lot from generally considered to be the best designed class in the game. Even if we close our eyes for Blastmage and Snowchugger – after all, mechs won’t be a thing any more in general – there’s still the incredibly creative Echo of Medivh and Duplicate (bye grinder mages) as well as Unstable Portal and Flamecannon, staples of the Tempo Mage. 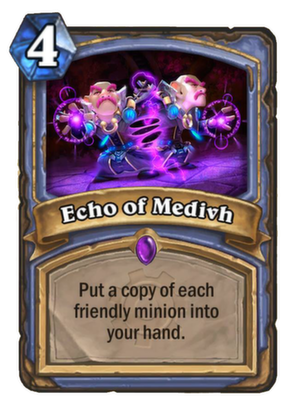 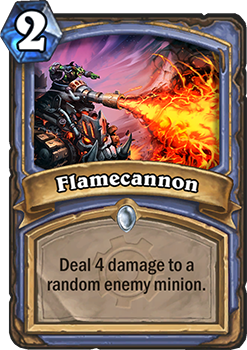 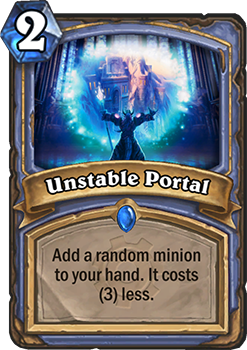 I doubt that the new expansion will be able to stich all those wounds. Echo in particular was a unique card that cannot really be replicated, while Cannon/UP were instrumental to how Tempo Mages curved into the mid-game. And don’t even get me started on Mages losing Mad Scientist and Healbot: I promised to leave it for the next article. 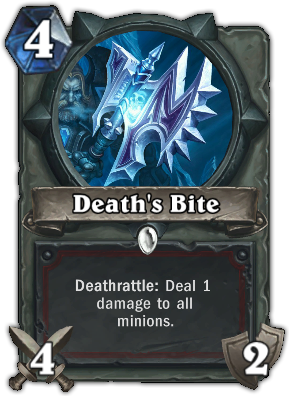 Although numbers-wise Wariors are parting ways with less cards than Mage, they might very well be the bigger losers here. Death’s Bite has been a class staple since day one of its release. The card almost does too much: It is a T4 removal, coming just after the War Axe expiration; it kills 5-health minions like Loatheb and Belcher; it has a [card]Whirlwind[/card] effect to generate card draw, life gain, damage boost or board population. An essential card if there ever was one and I can’t imagine what could possibly take its place.

Then there’s Shieldmaiden – a bit less valuable than Death’s Bite but still a core card for control Warriors. The class uses it not just for the body/life-gain combination, but also to trigger [card]Shield Slam[/card]s. The good news is that it’s a card whose effect and impact is replicable. Unlike Death’s Bite.

Warlock takes a big hit to its tempo and board control game. Imp-losion is quite possibly a top 3 card in class’ arsenal and is played in all lists, from the most aggressive to the most defensive. The swings it creates with [card]Knife Juggler[/card] can be game deciding and so are the 1/1 tokens generated from its effect. Boost them, taunt them, [card]Demonwrath[/card] them – whatever you like. 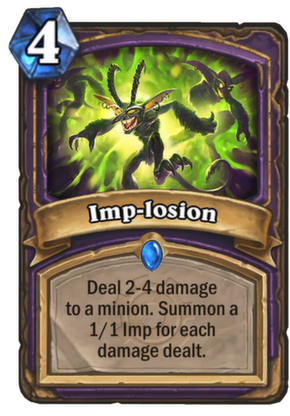 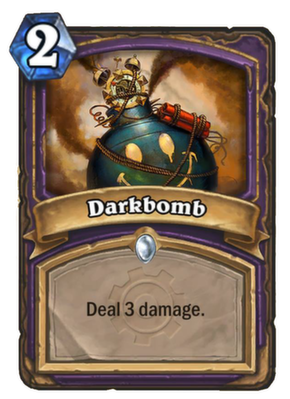 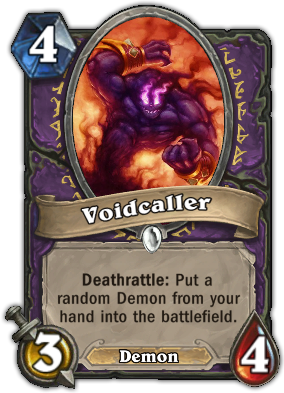 The departure of Darkbomb and Voidcaller will also not be taken lightly, especially by midrange and control decks. Warlocks lacked a hard 2-mana removal and they will be in the same position again, provided nothing to fill the spot comes with the spring release. Even though Shredder will be gone, a lot of dangerous 2 and 3 health minions will remain in the game to require the attention of a direct damage spell of Darkbomb’s type. Voidcaller, on the other hand, means no more ramping [card]Mal'Ganis[/card] or [card]Doomguard[/card] which is a heavy hit to Demonlock builds.

With Haunted Creeper and Nerubian Egg also rotating out, I expect the dominant form of Warlock for a while to be Renolocks or Malylocks.

Holy moly, that’s a lot. And not like Mage’s “that’s a lot but it’s mostly cool stuff that we can live without, we just won’t be as diverse”. It’s a “that’s so much that we’re back to those days where we couldn’t curve and were trampled by everybody and their cousin because we started playing on T4”.

None of this is over-exaggeration. [card]Shielded Minibot[/card] and [card]Muster for Battle[/card] single-handedly revived Paladin, dragging it out from swamp-tier to a Tier 1 terror. Even if nothing else was taken away, the loss of these two is enough to cause tremors in Paladin players.

But it’s not just those two. Secrets Paladin is saying goodbye to Avenge, its big single-target boost that made those 9/8 beasts of [card]Mysterious Challenger[/card] possible, and all builds are going to miss [card]Coghammer[/card], an important 3-drop that worked equally well on the offense and defense.

There are big shoes to be filled for Paladin. The spring expansion better deliver, or it’s bye-bye Uther once again. 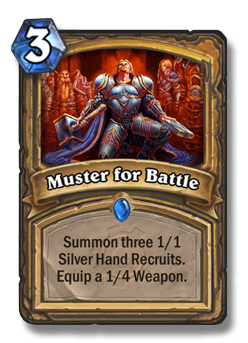 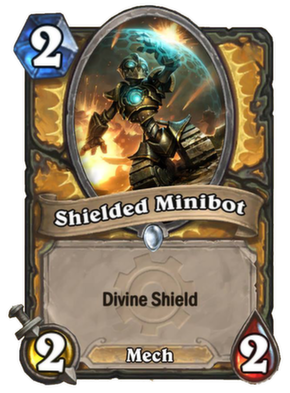 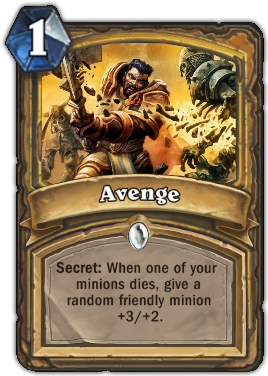