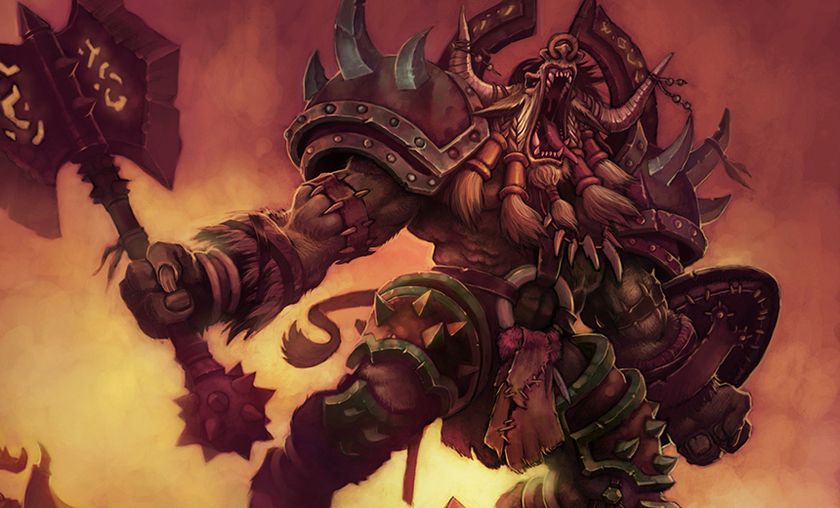 What happened to Hearthstone innovation?

The other day I came across a Mage opponent who played both a [card]Mad Bomber[/card] and a [card]Wolfrider[/card], although not from [card]Unstable Portal[/card]s as you might have guessed. Along with a [card]Loot Hoarder[/card] and an [card]Acolyte of Pain[/card], I was racking my brain trying to figure out what I was facing, but it was over all too soon, as I decimated the poor guy (or girl) with my self-made midrange Shaman, for me to have learned anything more .

However, questions remained in my head about the deck. What else was in this deck?  How much success had it had? Had it been played to get to Rank 4 or did the person just decide to try out a new deck once getting there with another, more familiar deck? One thing I know for sure is that this is an all too rare experience on the Hearthstone ladder.

Or at least in the higher ranks this seems to be the case. I am aware of the [card]Nozdormu[/card], [card]Youthful Brewmaster[/card] combo trolling the lower ranks, and the occasional day or two when Kripp decides he wants to mess around on ladder with the like of his Giants Paladin with [card]Holy Wrath[/card], along with a whole host of other wacky decks. But when it comes to viable, top level innovation, we all seem to wait around for Reynad or Tidesoftime to do something crazy that just so happens to turn out as inspired genius. Even then the changes made are often only minor adaptations to already existing decks, such as DeathstarV3's addition of [card]Deathlord[/card] to midrange Hunter. Eventually, the element of surprise wears off after a few days, as people become wise to these modifications and adapt.

With the sheer number of cards available, surely there must be more variety in combinations besides the same 20 or so decks seen day in and day out.

With the sheer number of cards available to us in the game, surely there must be more variety in combinations besides the same 20 or so decks seen day in and day out on ladder, only with minor alterations in tech choices to acknowledge the meta at the time. Despite all these cards, the only time we see any real innovation periods of note comes in the aftermath of an expansion. Unfortunately, the majority of these decks just don’t have what it takes to sustain any play time and fall out of favour in the meta - Dragon decks were around for what seemed like a week! When the dust settles the only apparent changes come in the form of one or two additional cards to already existing decks, such as [card]Imp Gang Boss[/card] to Zoolock.

The idea that innovation happens when there is a deck dominating the meta also just doesn’t hold up. In those dark times when [card]Grim Patron[/card] had a stranglehold on the ladder, I felt almost certain that we would bear witness to an uprising of new made Druid decks, after being made almost obsolete, only with the inclusions of [card]Poison Seeds[/card] and [card]Starfall[/card] as a board clear to answer. Alas, this did not happen. Instead, people played Handlock.

However, all is not lost. There are people out there. Whilst streaming, Archon member Orange recently came across an opponent playing entirely new breed of Druid. Although it looked to be based loosely around the token Druid of old, the deck appeared much more aggressive, even zoo-like, with [card]Dragon Egg[/card], various other tokens and [card]Soul of the Forest[/card]. Not only was the deck fun to watch, but it also won, overwhelming the board before finishing with a [card]Savage Roar[/card]. (Shout out to the opposing player, J4CKIECHAN. Well played!)

To me it seemed like there were some strong cards that were just ignored and forgotten about, under the notion that "if the card was worth playing, the professionals would be playing it." It is sort of an unwritten rule that a card is bad because no one else plays it and/ or they are just too scared to try. One card that struck me in particular was the Paladin secret [card]Avenge[/card]. As opposed to my net decked midrange Paladin (with [card]Annoy-o-tron[/card]), I changed it up drastically with Mad Scientist synergy and a [card]Kel'Thuzad[/card] (another somewhat forgotten card) in order to stay off the [card]Big Game Hunter[/card]'s radar.

My experience of this deck went as follows: 'Casual tryouts' were a success with four back to back wins. This gave me the confidence to queue up in ladder (Rank 5 at the time) where my dreams of being heralded as the next big innovator of the Hearthstone scene were quickly squandered. One closely fought loss followed by two crushingly embarrassing defeats resulted in me rapidly giving up on the deck. I may yet return to it at the beginning of next season, when winning isn’t as important, but in the meantime I had chickened out and this is where I believe the problem lies.

It takes time - a lot more than seven games - to work out the little details in a deck list and how to improve it. For example, it has taken me three months of constant little additions and subtractions on my Shaman deck to get it to a position where I can play it consistently at a high level and consider it as one of my best decks. Ranked is a grind and people aren't willing to waste precious climbing time creating a brand new deck that is not guaranteed to flourish when they can just play Grim Patron Warrior or any variation of Hunter.

Ranked is a grind and people aren't willing to waste precious climbing time creating a brand new deck that is not guaranteed to flourish when they can just play Grim Patron Warrior or any variation of Hunter.

Another issue is the way in which decks can be tested. It is hard to learn what you are doing right against bad players and very hard to learn what is going wrong against good players. With bad players, chances are that they made suboptimal plays which meant your deck may have appeared better than it actually is. On the other hand, playing against good players, with good decks, tried and tested decks, which they are familiar with, it is difficult to work out how to play your new deck against each individual premade deck whilst figuring out what needs to be changed, be it cards or even play style when approaching different classes.

There are stale patches in Hearthstone between expansions which make the game less fun through no fault of Blizzard, but due to the players. At the fringes of legendary and those higher ranks, there is nothing to gain from playing netdecks worse than those above you so why not give something else a try that may catch your opponent off guard? After all, there is no difference between finishing Legendary Rank 101 and Regular Rank 20.