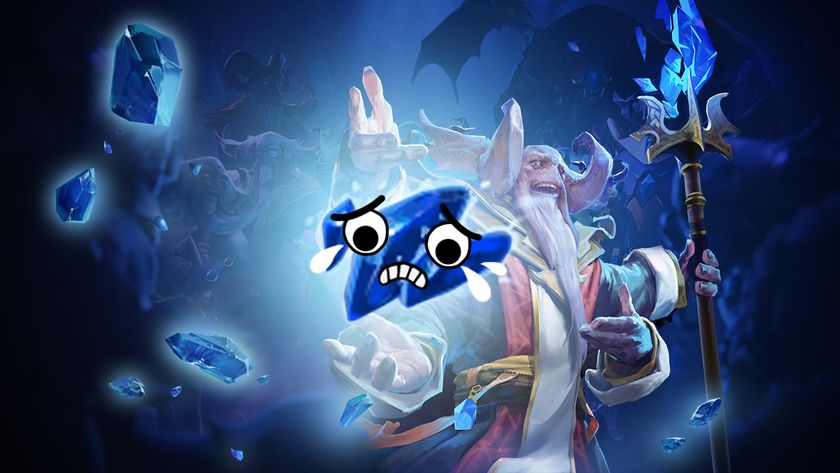 At the end of the 2021-2022 DPC Spring Tour, we take a look at the least popular Aghanim’s Shards across the five active  Dota 2 regions.

Across the five Dota 2 regions (Southeast Asia, China, North America, South America, Western Europe), a total of 680 games were played. Because of the special situation in Eastern Europe, the region couldn’t have the standard DPC League and hence, EEU games have not been taken into consideration. From those games, the data for the lowest percentage of Aghanim’s Shards pickups for heroes who were picked at least 20 games has been shown below. All the data was obtained from datDota. This data only includes Aghanim’s Shards that were purchased, and does not include Aghanim’s Shard pickups from the second Roshan. 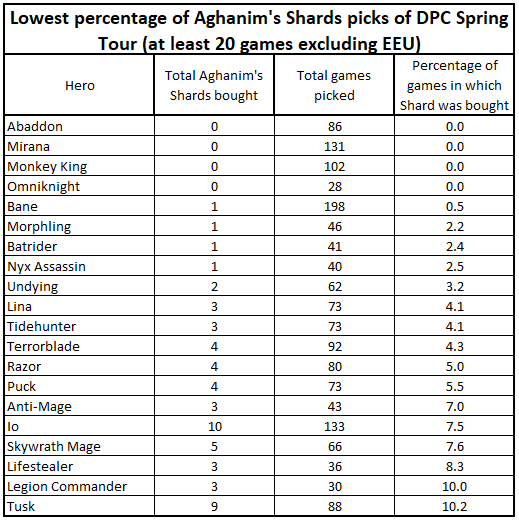 The most striking statistics are those for the Aghanim’s Shard pickup rates for heroes with over 100 games but negligible Shard pickups. Prominent among those are Mirana, Monkey King and Bane, whose numbers clearly indicate that even though the heroes are worth picking, the Shards aren’t worth considering.

Reworked Shard. Grants +1 Leap Charge. Sagan pounces, dealing 150 damage in a forward cone to units within 500 range of Mirana and slowing them by 30% for 2.5 seconds.

Mirana has been a popular hero for the past many patches (years, possibly?), but as a support hero. So her previous Shard wasn’t used too much. So it was changed in patch 7.31 to something completely abysmal. At least the old one was good for the once in a blue moon core Mirana, who got critical hits for her right clicks for the Leap active. The new Shard upgrade is not a consideration for any position.

Abaddon also had his Shard reworked in patch 7.31.

The Shard, while sounds strong in theory for a carry Abaddon, negates the fact that the hero is mostly played as a position 5 hero, and no hard support wants to spend 1400 gold on that Shard.

Bane and Monkey King Shards weren’t changed, but they have been in need of a buff for a while now. For the past two seasons, the two heroes have been popular, but their Aghanim’s Shards, not so much.  Bane has one of the best single-target disables in the games with Fiend’s Grip, and players prefer to spend money on Aether Lens and Aghanim’s Scepter, which maximize the Fiend’s Grip potential. In that itemization, 1400 gold is a bit too much to spend on the Shard. That is the case with a lot of other heroes (especially supports), who have a significantly better item build and prefer not to deviate from it.

For some heroes like Nyx Assassin, whose Shard was one of the most popular ones in the game once upon a time, it is a case of the Shard getting nerfed. A slight buff will make it worth the 1400 gold. For heroes like Skywrath Mage and Undying the Shard isn’t bad, but it isn’t suited to their roles. For all three of these heroes, the Shard would be a good option if they were being played as cores, but in professional games, these heroes are mostly played as supports. Not only does the Shard not help with their primary role, but it also leads to a waste of 1400 gold. Offlane Undying was tried out by a few teams, and that totally banked upon getting the Shard, but it didn’t pan out too well.Balancing Aghanim’s Shards is a tricky job, as it is a very unique item that does not consume a slot, does not provide stats, but upgrades an ability or adds a new one. For the heroes mentioned above, it gets even harder, as the heroes are already popular. So any buff to the Shards will have to be carefully countered by nerfs to the heroes in other places so as not to make them overpowered. Dota 2 patch 7.32 will have a lot of Aghanim’s Shards buffed, nerfed or reworked, and hopefully IceFrog  spares a thought for the heroes for whom Aghanim’s Shards hardly come into consideration.

Have you seen the new Mirana Aghanim's Shard being put to good use in any game?