At the end of the DPC 2021-22 Spring Tour, we take a look at the most popular Aghanim’s Shards across all five competing Dota 2 regions.

Aghanim’s Shard is one of the most unique items to have embraced the game of Dota 2. The item doesn’t take up space but does cost 1400 gold without providing stats. The benefits are, of course, very relative depending on the hero, the upgrade the Shard offers for the hero and the role the hero is being played in. As such, it is also a very tricky item to balance, as a small change can take it from an item not even considered to a broken one. That is what makes it interesting to track which Aghanim’s Shards are the most popular ones in a DPC season and which ones have been ignored and deserve a buff.

Going from the DPC Winter Tour to the DPC Spring tour, the patch changed from 7.30 to 7.31, and even though the meta didn’t see a major switch, Aghanim’s Shard was one of the talking points. In patch 7.30, a hero couldn’t buy a Shard till the 20th minute. That was brought down to 15 minutes in patch 7.31, which made a big change to the Shard dynamics.

The DPC 2021-22 Spring Tour recently ended, with a total of 680 games played in the two divisions of five of the six Dota 2 regions (North America, South America, Western Europe, Southeast Asia and China). Because of the special situation in Eastern Europe, the Eastern Europe region did not have the typical DPC season as the other regions, and hence, the data from EEU hasn’t been considered here.

In the 680 games played for the DPC Spring Tour, Tiny tops the charts for most purchased Aghanim’s Shards with 193. Following the Stone Giant closely is Sand King with 192 Shard pickups, with Dragon Knight, Pangolier and Grimstroke rounding up the top five. 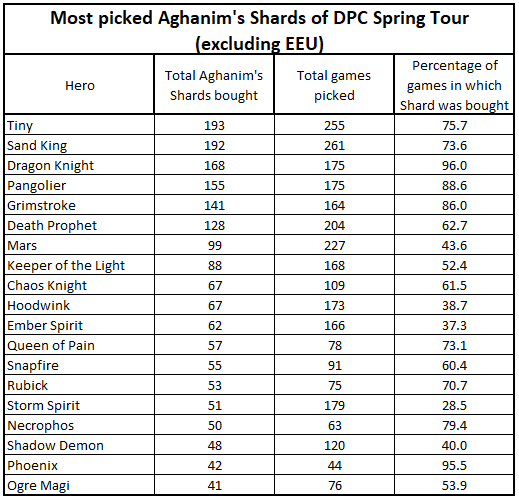 While the most picked by absolute number is a good way to look at the popularity of an Aghanim’s Shard, looking at the purchase of Aghanim’s Shards from a percentage perspective gives an idea of which ones are highly prioritized; and that paints a slightly different picture.

The honor of highest percentage of Shard pickup falls to Dragon Knight, who was not only picked for a lot of games, but also saw a Shard pickup in 96% of those games (175 games picked, 168 games in which Aghanim’s Shard was bought)!

But other heroes like Phoenix, Ancient Apparition and Necrophos who don’t really show up in the most picked table due to their lack of total games, come into the picture here. These are fringe meta heroes, who aren’t picked too often, but when picked, their Aghanim’s Shard is a go to item in their build. 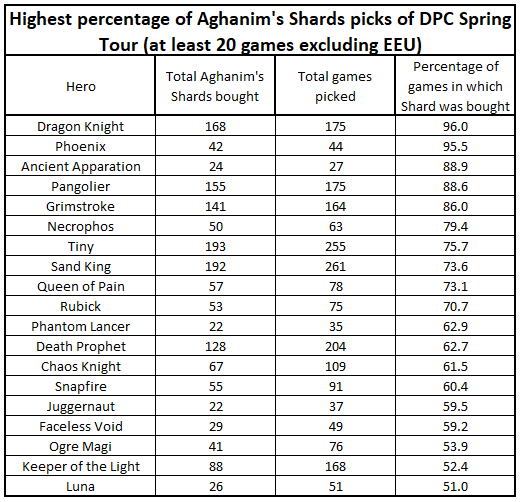 Combining the best of both worlds, we will take a look at what are possibly the five best Aghanim’s Shards currently in the game and why they are so good.

Causes Tree Grab to have no charge limit.

Tree Grab was nerfed in Dota 2 patch 7.31, but the buff to Aghanim’s Shard was more than enough to make up for it. Having the Shard available at 15 minutes means Tiny gets a 1400 gold Battlefury at 15 minutes, for 1400 gold, which is a little over one third the cost of the actual Battlefury (4100 gold). Literally, this one change has brought carry Tiny back into the meta after he was nerfed following his domination at TI10.

Ignites an area, dealing damage over time that lingers on enemies in it. Has reduced cast range when melee.

Dragon Kngiht’s Aghanim Shard story is possibly the most intriguing one. For the DPC Winter Tour, DK’s Shard was one of the least popular ones. But an AoE increase from 65 to 80 and the ability to buy it at 15 minutes has skyrocketed its popularity in patch 7.31. Dragon Knight can now afford to go for early team fight items like Blink Dagger, and still have the ability to farm fast with Breathe Fire and Fireball. Fireball is 80 DPS for 80 seconds, so it helps in clearing stacks quite quickly. It is also a great follow up for the Blink into Dragon Tail initiation, and also helps with pushing out lanes.

Until a couple of seasons ago, Sand King’s Shard upgrade wasn’t so good. But in patch 7.29 and 7.30, the Shard got buffed so as to only trigger near heroes and have an increased radius. Earlier, the Shard triggering and releasing a pulse in unwanted situations was detrimental. A Sand King walking through lane under the guise of smoke does not wish to give away his team’s location with an Epicenter pulse. But that has now been resolved, and with the pulse only triggering near heroes, it is a great way to know if there is an invisible or hidden enemy nearby.

Allows Sun Ray to be cast during Supernova and slows enemies by 12%.

The ability to cast Sun Ray was previously a level 20 talent, which was changed to the Aghanim’s Shard upgrade in Dota 2 patch 7.29. The upgrade has always been popular, but with it now being available 15 minutes into the game, the Shard popularity has increased in patch 7.31.

Pangolier’s Aghanim’s Shard has been one of the most popular Aghanim’s Shards in the game since its release in Dota 2 patch 7.28. The Shard offers a lot more than what 1400 gold typically gets you in Dota 2. It allows Pangolier to get off his ultimate without being interrupted, which is a massive boost for Donté Panlin. Rolling Thunder has a cast point of 1.2 seconds, which makes it easier to stop (by the opposition) mid animation, but Roll Up has a cast point of 0.1 seconds, which makes it a lot easier to get it off. In case it is a game in which Pangolier requires getting a BKB just for getting off Rolling Thunder, the Shard saves 2650 gold for accomplishing it. Roll Up also gives the hero a chance to turn around while Rolling Thunder is active in case there isn’t any surface to roll off of. Pangolier’s Aghanim’s Shard is possibly one of the major reasons he is popular in the current meta.

Do you like the fact that Aghanim's Shard can now be purchased at 15 minutes instead of 20 minutes?