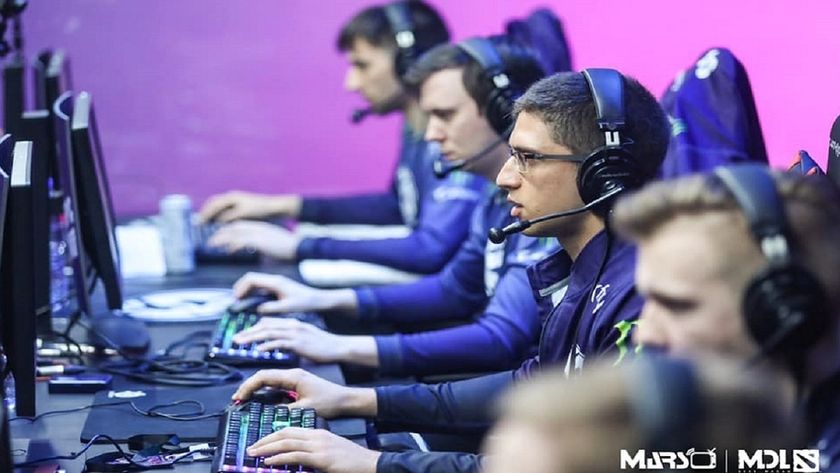 There was much buzz and excitement as MDL Disneyland Paris Major kicked off. Taking place in Disneyland Paris added an extra layer of hype that was already brewing thanks to stacked teams and some spicy drama heading into the penultimate Major of the season.

As the group stages started to play out, there seemed to be few surprises to write home about, but plenty of good Dota 2.

Virtus.pro took on 'villainous' Jacky "EternalEnvy" Mao and company to start their day off. Beastcoast seemed set on taking the Drow Ranger for all three games, which paid off exactly once as they were able to take a game from the world leaders and force a decisive third game after almost one hour of play. The last match belonged completely to the CIS powerhouse as they easily secured a place in the winners match.

Meanwhile, Keen Gaming had taken the first game of their series off of Team Liquid. The Chinese fought hard to keep control of the match and were able to close out the game before Team Liquid could seize it. Unfortunately for Keen Gaming, the buck stopped there. Team Liquid turned the tables in a reverse sweep with two relatively convincing back to back victories.

The winners series between Team Liquid and Virtus.pro was a big treat for spectators. Even though VP swept through the TI7 champions, the games were intense and thrilling. The first match took over 60 minutes with Team Liquid holding on to the lead for the majority of the time. Twice VP was able to seize control starting about 45 minutes in, but Team Liquid was quick to take it back, that is until the end. 57 minutes in. Team Liquid had a lead of approximately 15k gold but two back to back devastating team fights crushed everything they had been working towards and VP snatched the victory in the end. The second match started out belonging to Team Liquid, but a roaming Alexei “Solo” Berezin on Rubick provided all of the support  Virtus.pro cores needed to farm away and eventually become much too powerful for Liquid to deal with.

With their sweep, Virtus.pro secured their place in the upper brackets as the first seed.

Team Secret showcased a Ludwig “zai” Wåhlberg Pudge in the offlane for the first match against Team Empire. The CIS team had little to no chance in the match against zai's successful rotations and on spot hooks. Team Empire was only able to secure eight kills for the first match and went out without so much of a whimper. The second match was another cakewalk for the European team as Michał “Nisha” Jankowski's Anti-mage was a beast, leading the team to a clean 2:0 sweep.

Ninjas in Pyjamas took down Chaos Esports in a fast and furious 23 minutes that looked to say the Swedish based team was going to be quite the force to be reckoned with. The South American's were not going to go down lightly (or at all) against the OGA Dota PIT Minor champions and knocked them down in a reverse sweep. The second match they ran over NiP easily with a Nature's Prophet pick that was too much for the Europeans. The second match was more evenly contested as both teams battled it out to the fullest for just over an hour. In the end, Chaos prevailed and moved on to face Team Secret.

In contrast to Group A's winners series, the matches here were a bit more anti-climatic as Team Secret stomped over Chaos in two games that totaled one hour.

Team Secret's victory gained them the top seed of the group and a place in the upper brackets.

While the first two groups of the day - A and B were close and mostly pushed to the full three-game series, Groups C and D were clean 2:0 sweeps across the board.

Both of the opening series showcased Chinese domination as Vici Gaming and PSG.LGD trampled on their opponents, each with a 23-minute match followed by a 35-minute match, all of which were completely in favor of China.

With both Chinese teams prevailing, the stage was then set for an all Chinese battle for the top seed. What was expected to be a tight race turned out to be nothing of the sorts. ViCi Gaming absolutely shellacked PSG.LGD in the first match in just 22 minutes with a 19:7 score. The second match started out belonging to PSG.LGD and fans thought they would be in for a cut-throat series finally. However, about 23 minutes in, ViCi Gaming took a good fight which sparked their fire. They then overpowered PSG.LGD until the end to claim the top seed and upper bracket placement.

Coming into MDL Disneyland Paris Major, compLexity Gaming changed out one player and rebranded their design. Ready to take on the world, they quickly fell short to their NA rivals, Evil Geniuses. In the first match, Artour "Arteezy" Babaev played a flawless Anti-mage with double the gold worth of the highest player on compLexity. The second match Syed Sumail "SumaiL" Hassan was racking up kills all over the place and EG's victory looked like child's play.

OG's matches against Fnatic might have ended in favor of the TI8 champions, but were highly contested and didn't come easy. OG is still far from their prime form, but their season has been littered with breaks, struggles and roster changes. Now back to their winning lineup, the team is trying to find a way to secure a TI9 invite to defend their title. In 19th place with only 123 points, the Europeans will need to take a top placement to make some damage and climb the ranks enough to be serious contenders.

Set to face off against EG, the 'grudge match' between the two was something fans always look forward to. Evil Geniuses had maintained the lead and control, sometimes small as it was, for most of the game. OG then snatched the game from the NA giants about 25 minutes in, only to make a crucial mistake and give it right back to EG five minutes later. The second match belonged completely to EG and was filled with high aggression. With a total of 73 kills on the board in 48 minutes of gameplay, there was no doubt that both were out for blood.

EG's 2:0 victory secured them the top seed and a place in the upper brackets of the playoffs.

The action resumes today, May 5th at 10:00 CEST as the loser series of all groups then will lead into the deciding matches. No teams will be eliminated but their fate is on the line as the playoff stage will be set.

Will there be any upsets in the rest of the groups?

Yes, I think so
Thank you for voting!
Nope, it will go as expected
Thank you for voting!
Cristy “Pandoradota2” Ramadani
Pandora is a behind the scenes Dota 2 professional Jack of All Trades. When not busy with Dota 2 work, she is out trying to save the world or baking cupcakes. Follow her on Twitter @pandoradota2
Share Tweet
151 people reacted to this post