IceIceIce: "I actually prefer the past Internationals"

GosuGamers sat down for an interview today with Daryl 'IceIceIce' Koh, Vici Gaming's gregarious offlaner.  We asked him about his TI experience so far and his thoughts about Valve's handling of the event.

We’re very happy to have IceIceIce here to talk to us today from Vici Gaming.  IceIceIce, you’ve been here three times for the International in Seattle.  How is this event so far compared to the past few Internationals?

I actually prefer the past Internationals, especially The International 2, because I thought that that was a pretty nice event.  Really cozy for the players playing at the Valve office.  The main thing I dislike about this event is that I’m here for 6 or 7 days doing nothing, because I’m ready to play and I think it’s a waste of time to scrim in some ways, especially when teams are just trying to keep their drafts as secret as possible.  So it’s pretty annoying to be here, doing nothing.  But it’s actually good to have practice rooms for some teams I guess.

How do you feel about the accommodations beyond the scrimming?

I like Bellevue more than Seattle.  I think Seattle is a really… it’s a city.  And Bellevue is a nice quiet small towns, and filled with Asians for some reason.  Yeah, I just prefer Bellevue overall, but the Westin is the Westin, Bellevue Westin, Seattle Westin, pretty much the same.

How do you feel about the format this year compared to last year?  A lot of people were very disappointed with last year’s format, but in this format you can lose a best of one and be basically out of the tournament even if you did well in the group stage.  What do you think about that?

I think this format, especially the group stage, it favors top teams too much, because if you win 2-0 you get 3 points, and if you get 1-1 you get 1 point.  The 1 point is fine but the 3 points is really a lot.  I think it’s weird that everyone gets a chance to play at KeyArena.  KeyArena is a horrible place to actually play Dota in, the Benaroya hall is a much better place to be honest.

In Benaroya hall it’s a really small place, and it’s for watching stuff… like theatre stuff, right?  It’s really hard to watch Dota in a stadium I guess compared to in a small cozy place, and the sound effects and everything is just much nicer in Benaroya hall. 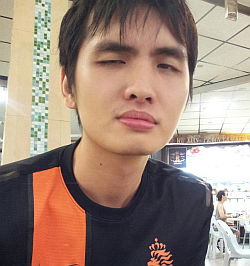 In terms of the stats that Valve just released to all the teams, do you think that gives an advantage at all in the group stage for the smaller teams that may not have a coach?

I think it gives a fair advantage to every single team. I guess some idiot leaked that out, and it wasn’t very smart of him.  But it’s pretty fair, because the stats are pretty useless to me anyway.  Everyone has the same stats, everyone can make do with the stats and adjust accordingly.

Your group, group B, is widely considered to be the weaker of the two groups.  What team do you think will give you the most trouble?

I think every team is going to give us trouble, because if you lose one game you are going to lose a lot of points.  2-0 is the way to go, any game lost is pretty bad.  So every team we have to watch out for.

A while ago you let go Black, and replaced him with Hao.  How has your team chemistry changed since Hao has been on your team?

Do you think the meta will significantly change during this event?

Yeah I think the meta will definitely change, every TI has their own meta.  At TI it doesn’t matter who was the best team beforehand.  If you can really play and perform at TI you might have a shot to win it, even like a really bad team.

And do you think that these changes favor Vici gaming or will they favor other teams? How do you feel the offlane position has changed?

I guess it favors Vici Gaming because we aren’t the team to look out for now.  Secret and EG are the best teams now, so everyone should just look out for them.  The offlane is still the same, it depends on what the opponent is playing, or what the team wants to play, and you adjust accordingly and play the game.

A lot of people have been disappointed with the new trade deadline.  What do you think of that?

20 days is really fast, but I think that’s because from what I heard the majors are gonna be held in November.  Because of that Valve wants to make things clear.  If every team is hopping, trading, sponsors aren’t gonna be coming.   They wouldn’t really want to get teams, because after every TI teams are just gonna disband, change teams, I mean it happens after every TI because somebody’s way too big.  Valve wants to make career stability, but I think Valve favors foreign teams way too much compared to the Asian teams.

This is more for the Western teams instead of the Chinese or Southeast Asian scene.  I mean there’s no scene in Southeast Asia.  The Chinese teams wouldn’t really need 2 stand-ins because they’re gonna play each other earlier, but for the Western teams it’s different because with the two stand-ins option, you get to choose who is the best player to play, and you get to just kick them out of the team if they are bad.  Like oh, he’s a standin now.

What’s your overall opinion of the majors.  How do you think it will change the scene?  Do you think Vici will still be interested in third-party tournaments with the majors coming up?

I think every team is gonna be interested in the third party tournaments, since it’s based on the amount of money and how good the tournament is.  ESL was pretty good I feel, and we are still gonna play Chinese tournaments in China, we aren’t just gonna play four majors. And it’s money: money makes the world go around.  But majors are gonna be the main thing I guess, so everything is gonna revolve around majors.  And I’m glad that the majors are appearing, since I’m actually quite sick of people just retiring and playing for the next half a year before TI.

That’s all the questions I have for you today.  Do you have any shoutouts that you wanna give?

Shoutout to whoever is reading the interview.  And… and… shoutout to… nah there’s no shoutouts.  Oh, shoutout to my sponsors!

Interview conducted by porqpine at 11:00am PST on July 25.