Two Chinese teams battle up to move one step closer to the Grand Final. iG are looking to have a repeat of TI2 and make it to the Grand Final to try and take the title again. LGD have had an impressive run, saving themselves from elimination and now looking to extend their record.

Draft - LGD put together a line up that doesn't have much teamfight synergy, but has incredible burst and pick off potential. Cenatur provides lock down, with Invoker and Skywrath Mage to follow up with nukes. iG go almost the reverse and have a huge teamfight line up that has the great combo of Lich, Venomancer and Void to control the enemy team and unleash the AoE.

5:04 FIRST BLOOD - The first kill goes the way of LGD mananging to show of their ganking nuke power, securing a kill on Void

8:46 - Alchemist stun charges and lands on Lich, which is immediately followed up by Sunstrike to burst him down.

10:21 - Another Sunstrike combo hits, this time with Centaur and landing on Venomance

11:52 - Centaur and Skywrath team up at top to kill Lich with another well executed combo

13:38 - Centaur ultimate is triggered and three LGD players move into the jungle to kill off Void with another great Sunstrike

15:04 - One for one trade at bottom and top, both teams getting quick kills

16:16 - Tier one bottom tower goes down for LGD, but Alchemist gets chased down and the burst combo doesn't hit for LGD

17:13 - Three heroes go down on the side of LGD, but they find the trade by taking down the tier two mid

19:49 - LGD keep the pressure on and keep Void shut down with the Centaur/Skywrath combo once again

25:12 - Void jumps in at mid and kills Invoker, but the follow up from LGD. They roll in with BKBs and take more kills. Invoker buysback and lands a Sunstrike on a retreating Death Prophet

26:20 - LGD uses this momentum to move into the iG highground, taking the barracks

28:51 - The second highground push comes from LGD, but the Void jump into Chrono means they take a kill and push LGD off

30:26 - Another move into highground once again, this time killing off Lich and taking their second set of barracks

32:19 GG - LGD move systematically into the thrid barracks, using the Centaur to pick off Lich again very quickly. iG have lost too much and cannot come back from what would have been three lanes of barracks 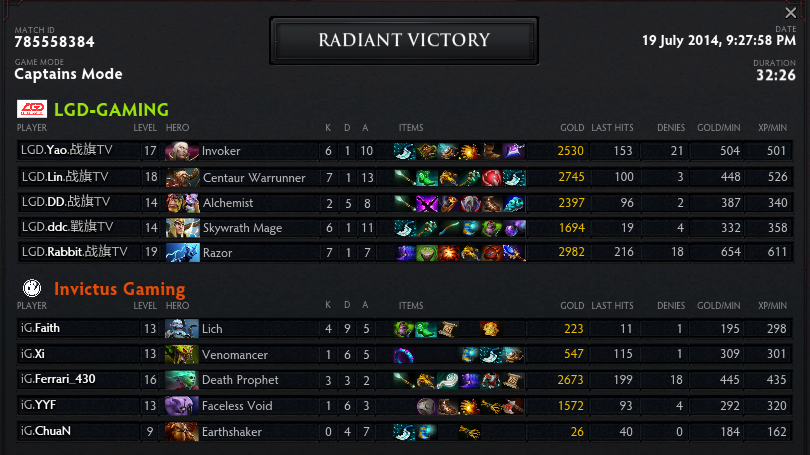 Draft - As we go into game 2 it looks like iG have opted to pick up a line up with as much burst as LGD had last time. Even though LGD get the king of burst, SKywrath Mage we will have to see if they can out last the lock down and nuke from iG.

1:34 FIRST BLOOD - Mirana hits an early arrow onto Skywrath Mage and with the amount of follow up iG has in this aggresive trilane, they easily nuke him down.

4:19 - iG continue to find kills, taking one at top and one at bottome from another great ChuaN arrow

5:09 - Dragon Knight gets caught in a Chronosphere at mid and with the Sunstrike and Mirana follow up he goes down, increasing the iG lead

6:03 - LGD finally take a kill, managing to catch out Viper at bottom with three heroes

8:49 - LGD continuw to try and catch up on kills, managint to take out viper again and outting the score 9-4 in iG's favour

12:11 - Great pick off for LGD, comboing up Fissure, Boat and Mystic Flair to blow up Invoker

16:55 - Even though iG are still ahead in kills, ChuaN gets caught by the Torrent/Boat combo to give something back to LGD

17:35 - iG take two kills in return and force LGD back, picking up the tier one mid as they go

18:21 - iG then follow up by taking the first Roshan of the game

19:33 - Dragon Knight gets caught out walking from top to mid and iG put their burst combo to work again easily picking him off

20:33 - LGD lose four on their highground after a great Chronshphere. iG take the win and back off

29:15 - iG take another Roshan with LGD not being able leave their half of the map

30:36 - An incredible Chronosphere hits the whole LGD team on the highground, but only the Skywrath Mage drops and iG have to back off for the time being

32:09 - After two pick off outside the LGD base, iG move into mid lane and take the barracks

32:40 GG - With the creep wave pushing in, they just decide to take the second lane of barracks  and LGD call the game 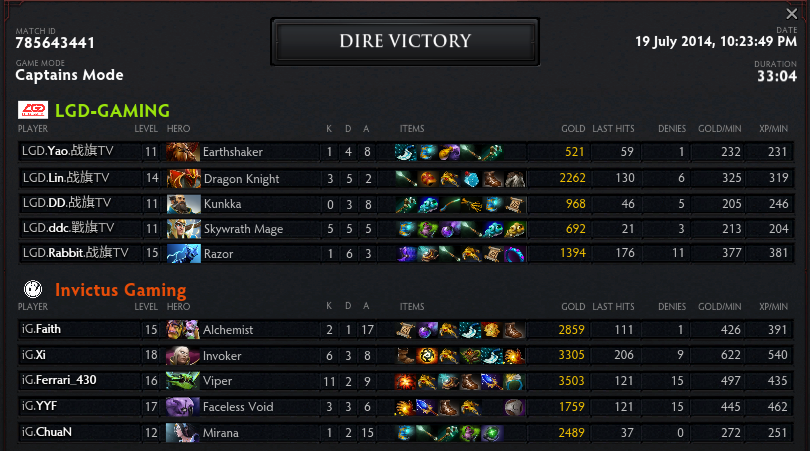 Draft - IG once again looking for the initiation of the void, while farming an exort invoker who will split push and contribute with sunstrikes along with the high burst damage from Skywrath and Alchemist supports. LGD may look from long range initiation from Ember spirit searing chains, Centaur stomps into Mirana arrow, snowballing into pushes from a mech carrying Viper.

1:45 FIRST BLOOD - iG manage to stun Mirana, then chase her down with Skywrath nukes and Sunstrike to take the first kill

4:10 - A failed gank from iG actually turns into a kill for LGD with the Centaur burst damage

4:53 - This followed into a gank on Invoker at top, with Venge body blocking just enough for entaur to connect the Double Edge

5:46 - iG decide to put an end to the free farming Viper, by sending the Alchemist/Skywrath gank squad to get the kill

8:33 - Centaur puts his early Blink to good use by catching Ferrari, managing to burst him down the the help of Venge

9:37 - Using Chronosphere at top iG get two quick kills on Centaur and Venge before quickly backing out of the jungle to safety

12:48 - LGD commit three heroes to try and shut down Ferrari on Void, successfully ganking him at top

17:15 - iG secure an important kill on Ember Spirit, who had yet to die, with Chrono and Mystic Flair

22:13 - A standoff occurs at the Roshan pit, with iG eventually zoning LGD off the objective. They take the kill and the Aegis, but LGD manage to get 2 kills in return

28:17 - Viper falls to the burst delivered after a Chrono catches him, but LGD manage to get the better trade by actually managing to take out three heroes

34:19 - Engagement at mid lane leaves four dead on the side of iG, suffering from a bit of indecision from Void on where to Chrono. They take a great fight and move into Roshan

39:50 - Ember Spirit gets caught out at top being quickly dealt with by Invoker and Alchemist, but that only pops the Aegis and LGD are ready for the counter, taking two kills

41:25 - A high ground push from LGD gets stopped by a well placed Chrono, but iG lack the damage to really stop the push. Three go down on the side of iG and the push continues to take the mid barracks. They quickly move through to top and take the barracks there as well, leaving iG crippled

45:02 GG! - With the great team fights for LGD, iG were left too far behind and have to tap out, having lost two of their barracks. It was a tight game and really came down to who cracked first. In the end LGD showed the resolve and focus to capitalise on a moment of iG weakness and sent the returning champions packing.