The start of the lower bracket features the leaders of the old school of Dota Na'Vi will try and fight their way through to their fourth consecutive TI Grand Final. But first they will have to prove themselves against relative newcomers Cloud 9, who have been mastering the meta and proving themselves worthy opponents.

Draft - This is maybe the creative draft Na'Vi fans have been waiting for. They take two popular heroes Void and Mirana. They then take Enchantress for some early push. Their final two picks are Eldar Titan and a very unexpected Lina. Cloud 9 pick a very strong line up to reply with great split push from Morphling and Shadow Shaman, whuiler Ember Spirit and Doom will provide the DPS in the mid game.

1:56 FIRST BLOOD - Eternal Envy takes first blood against the offlane Eldar Titan who gets a bit too far up in the Radiant jungle

6:32 - After an exhcange at top that leaves no one dead, Dendi and Xboct try and gank Singsing at mid, but he survives with Flame Guard

8:10 - two for two exchange at bot, with Xboct managing to secure an even trade with Chonosphere

9:23 - Solo kill on Dendi from Bone7, which leaves the Mirana in a very tough lane and quite behind

11:35 - Another successful kill on Dendi, commiting Doom, Earthshaker and Ember Spirit, but keeping that Mirana down

13:19 - Chronosphere at mid, taking out Aui_2000 easily. Singsing jumps into to try and trade but gets blown up by Laguna Blade

14:24 - Roshan goes down to Na'Vi, being taken quickly by Void and Enchantress

16:46 - Cloud 9 push into the tier one top with Shadow Shaman wards, but even though Void gets Doomed he manages to take down Aui before losing the Aegis

18:09 - Singsing gets left on his own at top and eventually dies to Void after Chrono

18:33 - Cloud 9 take the tier two bottom, but Lina shows up and uses her Laguna Blade to just take out Aui

23:12 - Na'Vi camp the bottom tier one tower with the whole team for a good few minutes, while Singsing and Envy just farm up. They eventually just let the tower go though

25:54 - Triple kill for Envy at the Roshan pit! Na'Vi get found out in the pit and although they take down Doom with a Chronosphere, Morphling shows up and turns the fight

28:01 - Counter initation from Cloud 9 after Chrono has been used. Singsing catches Puppey on the retreat and Morhling melts him with his Ethereal Blade

29:48 - Three more kills for Cloud 9 at mid, they move into top and pressure the highground. With Morphling having the Aegis they show no fear and take the Na'Vi barracks

33:49 GG!  - With a great fight at mid lane, Eternal Envy goes Godlike and three heroes fall for Na'Vi. They realise they are too far behind and call the game. A great start for Cloud 9 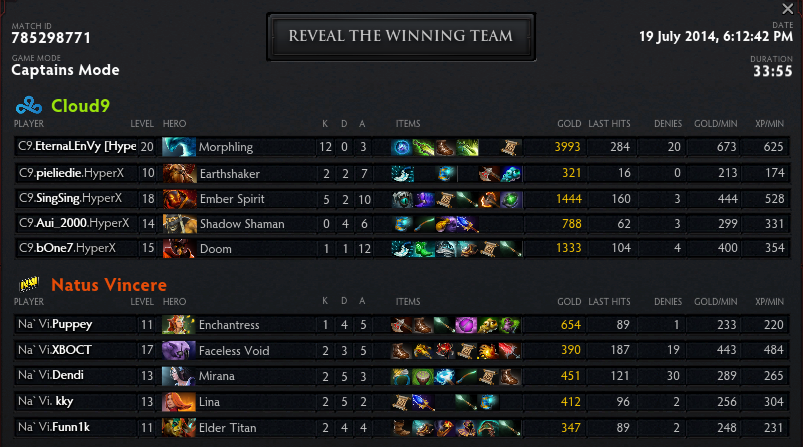 Draft - For game 2 Cloud 9 take the Doom and Shadow Shaman again, but adding a Tidehunter for even more teamfight control. They then give Templar Assassin to Singsing in the mid lane, a hero which he has great experience on and can potentially wreak havoc on the Na'Vi line up of Enigma, Venomancer and Invoker. Venomancer is picked up pretty much as a direct counter to Templar Assassin and could potentially even go mid. We will see if the Chen pick from Cloud 9 can deliver the early push into snowball team fight they need or if Na'Vi can come out and keep themselves in the tournament with some classic heroes they are more than comfortable on.

2:44 FIRST BLOOD AND COURIER - Cloud 9 rotate into mid with a smoked Chen and invisible Tidehunter to kill off Funn1k and getting the courier as it comes back

4:33 - Bone7 evetually falls to Invoker and Witch Doctor, while Venomancer rotates in and gets followed by Singsing. He escapes but actually ends up dying to a neutral

7:32 - Doom gets used on Void and Cloud 9 manages to secure the kill on Xboct

8:48 - Cloud 9 try to defend their tier one tower to the plague ward spam, but end up losing it and Bone7 after a well placed chronosphere from Void

9:58 - Ravage is used but there is no follow up. Void gets killed by Doom, but the tower goes in favour of Na'Vi

11:01 - Four heroes dead on the side of Cloud 9, with the Chronosphere/Sunstrike combo working perfectly. Blackhole lands afterwards on two and takes out Bone7 and Aui_2000

12:25 - Initation from Xboct at top on Eternal Envy with another solid Chrono, but Doom manages to live and Cloud 9 end up getting the kill on Void

14:55 - Tier two bottom goes down against Cloud 9, but Doom is there to catch Void again. He manages to escape, but the follow up from Singsing catches up to Puppey to secure the kill

16:30 - Cloud 9 are forced to let their tier two tower go down, as they realise they simply can't team fight yet

17:06 - Na'Vi rotate into bot, chasing Shadow Shaman and secure a quick kill before moving in for an easy Roshan

19:44 - Na'Vi slowly push into the Cloud 9 highground with mass serpent wards and Enigma summons. There are skirmishes here and there forcing buybacks from Cloud 9, but eventually Na'Vi are able to overwhelm and take the barracks

20:57 - Eternal Envy is picked off and Na'Vi push into bottom barracks

21:42 GG! - They continue to push, with Kky getting a double kill on Witch Doctor. Too much is lost for Cloud 9 as they are jsut drowned by the five man death squad that Na' Vi very quickly became

Draft - Na'Vi have picked a lineup that looks like it will focus on five-manning towers, fighting around rasta wards and death prophet ulti. Cloud 9 look to counterinitiate during these pushes with Clockwerk and Ember Spirit, with doom providing control for the brewmaster played by Xboct.

2:13 FIRST BLOOD - Bounty Hunter sets up a gank at mid, using three heroes to try and shut down Dendi. They get the kill and give Singsing a wave of free farm

6:28 - A great hook initation from Bone7 secures him another double kill. Cloud 9 continue to follow up and get even more kills making the score 8-2 as Singsing falls at top

7:40 - Doom on Xboct means he takes a fall, but Na'Vi do take the trade by killing Skywrath Mage

11:06 - Another hook shot from Bone7 lands on Nature's Prophet and is blown up with the Mystic Flare combo

12:27 - The ganks continue even after Eternal Envy goes down at bottom, as Bone7 hooks and kills Shadow Shaman, forcing out Serpent Wards and Primal Split. Cloud 9 walk away unscathed

13:46 - Clockwerk just keeps landing crucial hook shots and Skywrath Mage is there again to deliver the burst on Dendi

15:35 - Pieliedie is found out being sneaky in his invisbilty and Na'Vi punish his positioning and move into Roshan

20:30 - Na'Vi move into the mid tier one with Death Prophet Exorcism, but Cloud 9 get the initation they need. Brewmaster avoids death with split and Ember falls quickly, but Singsing buysback and comes back into the fight. They manage to chase down Dendi taking even more kills

21:54 - More kills for Cloud 9 in the Dire jungle, as Bone7 puts his Scepter Hook to work, taking three and only losing one hero

24:40 - A pick off at mid for Cloud 9 using the Skywrath Mage/Clockwerk combo again, forces a Brew split that is ultimately wasted.

26:12 - Another initiation from Bone7 and even though the Mystic Flair is off the mark, Cloud 9 just roll through the Na'Vi line up, completely team wiping them

29:00 - Singsing gets a bit cocky and goes down at mid, but he instantly buybacks and jumps in. Cloud 9 use their huge mobility to get a triple cogs from Bone7 to turn the fight completely

30:41 - Cloud 9 back off after taking the melee barracks and move back to farm up and consolidate their lead

31:00 GG! - Na'Vi go for one last smoke into the Radiant jungle but get caught out by Doom with Shiva's. Bone7 locks Xboct and the split into the cogs separating the fight and making it a disaster for Na'Vi. The three time grand finalists are left with no options and have to call the game. Cloud 9 advance to meet Vici Gaming in the next round 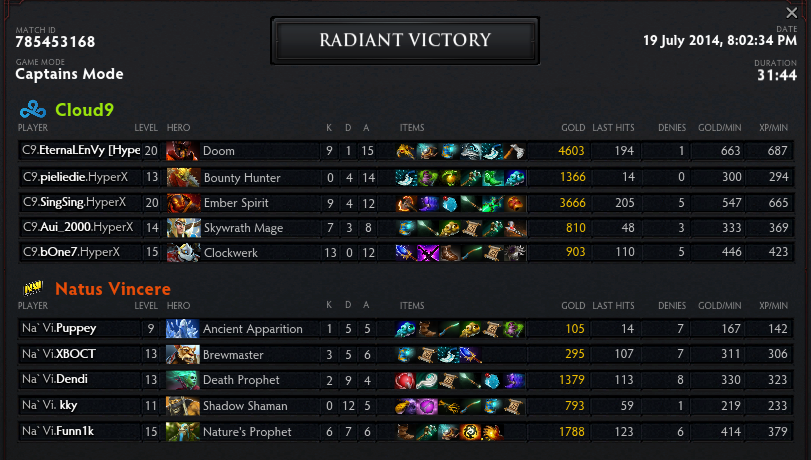