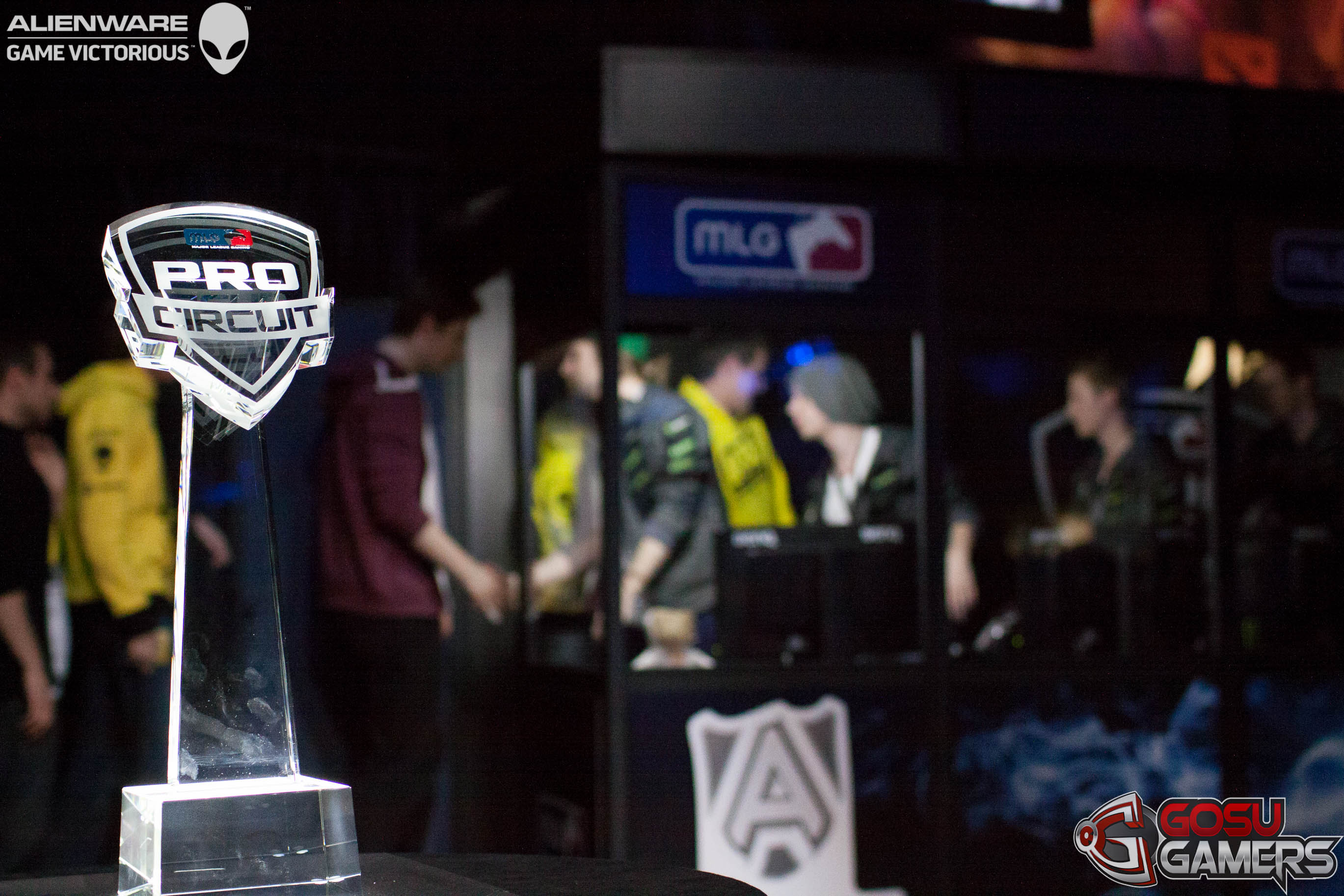 In the shadow of greatness.

Sometimes a day just starts out right. Sometimes it happens on it's own, with birds singing outside of your window as you wake up to a lovely summers day. And sometimes it takes a bit of a nudge, as in the case of the drones of the press room today when dpm showed up with big bags of baked goodies for all of us. She really is just a shining beacon of awesomeness in e-Sports.

After making up for a missed breakfast with some lovely muffin and a granola bar, we set about the work of the day. Second days of events are usually a bit more difficult to program for, as a lot of the basic shots of happy fun times with the various personalities in attendance have already been done. Instead, the focus becomes more on trying to fill out some gaps in terms of pictures of new players and maybe trying to get a few pictures that tell the storylines of the day.

At the start of the day the focus fell all on DK, but as time went on it turned into the continued strong performance of Sigma and the possible elimination of one or both of Alliance and Na`Vi. When Speed Gaming destroyed Na`Vi while Arteezy dominated Dendi in lane, while we were all surprised and it became for a while the talk of the press room, yet nobody quite dared to believe the events that were about to unfold.

After Na`Vi beat Alliance it became clear that their final match against Fnatic would be very important for them, as a victory would straight put the Ukrainians through to the next round. I spent some time with Fnatic as they strategized for this game, going through the advantages of first pick against Radiant and considering different scenarios for how the first bans and picks would unfold. In some sense this focus on your opener in the draft reminded me of chess, where the opener is a highly formulaic play made before transitioning into the mid game, where players play based on certain patterns that exist on the board, in much the same way as in drafts teams end up reacting and countering their opponents picks.

Without giving too much away as Fnatic and Na`Vi will both still have to play each other at events in the near future, with no team involved in this whirlwind having much of a chance to head back to the lab and develop new strategies or just get some scrims in, I can't fully let you in on how that draft unfolded compared to our discussions. I can tell you that the team wasn't happy with some choices made in that later portion of the draft. Regardless, Na`Vi took the game and secured their path into the finals, after which they headed out to celebrate a bit as their day was over relatively early. 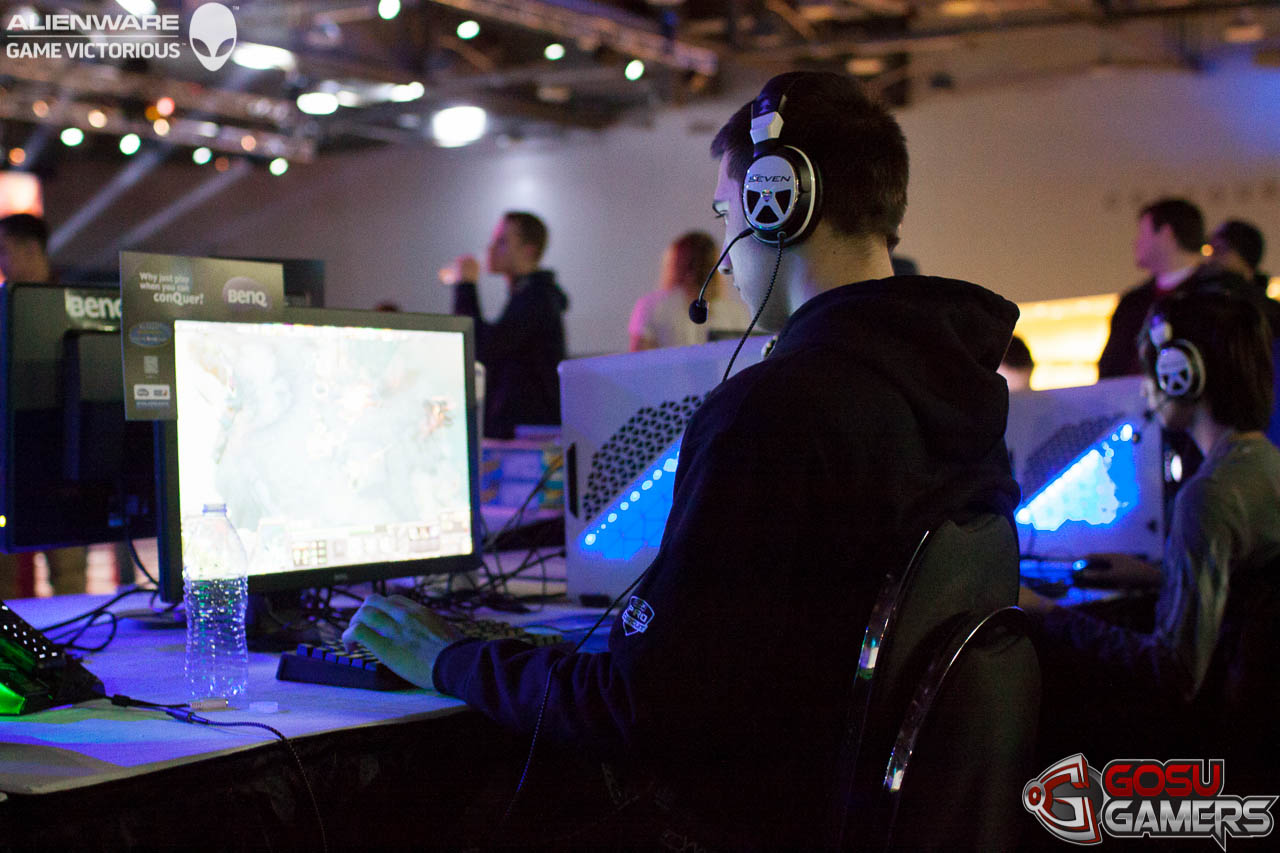 The focus shifted in the press room, as we tried to figure out exactly how what seemed the inevitable tie would pan out. We talked to MLG admins and they explained to us the confusions about what the time rating mentions would mean in the rules provided, and we all settled in to figure out the likely scenarios. Fnatic beats Liquid, Fnatic advances. Liquid beats Fnatic, we get a 3 way tie. And the one option that was eventually lifted up mostly because it was a guaranteed way out. Speed Gaming beats DK, Speed advances and we all get to go home at a reasonable hour. This, along with the partial NA Dota feel of Speed helped inform much of the press room's preferences as they cheered on EE-Sama and the A-God, because cheering against Liquid as perhaps a more likely way to resolve things without further tiebreaker games was a bit too unpalatable for many of my NA brethren.

Convinced the action would take place at the main stage, where Fnatic and Liquid went head to head, I set down with Fly's girlfriend to watch the games under great anticipation. I had seen the picks from DK, but they had been picking some surprising stuff all weekend, and I figured Ursa was another prepared idea, likely harkening back to Liquid at TI3 and Alliance at G-1. There was no way that DK train was going to stop, and having exchanged a few words with IceIceIce before the game they did not seem to indicate any consideration of strategizing with this result. Alliance in or out, they did not care.

Fnatic took the lead and although Liquid played well and used any space given to them to try and beef up TC, the flow of the game felt promising. But as we glanced at the stream and noticed that Speed Gaming were ahead, I realized it was likely we'd need a reaction shot of Speed if they were to win. I headed off to tell my partner in crime, WhatIsHip, this shot would be golden, but I really wouldn't have needed to. He had had the same idea, and was already in position behind the players, hanging out with Monolith. I returned to the Fnatic and Liquid game, and when we heard the eventual roars from the direction of the other teams, I headed back to congratulate the fourth place team.

On the way there I ran into Alliance exiting the area, gave AdmiralBulldog a hug and headed off to congratulate SingSing and the team. When I arrived the realization hadn't quite sunk in for some of them, still thinking that the Fnatic and Liquid game would matter somehow for their future. I told them it did not, that they had secured their spot in the next round entirely on their own. And so the ultimate reversal of fortunes was complete, with 0-3 turning to 5-0, and suddenly Speed Gaming was the story of the day. Sadly the lights were so low at this point that in order to get any kind of picture the luminosity had to be turned way up, to the point where a black and white pictured was the best compromise in order to capture Speed Gaming's celebration, which was a slight setback for us personally.

After consoling Fnatic on their victory, I headed off back to my hotel along with the NA Dota crowd, where we eventually hunkered down to drink a few beers, eat some pizza and play some Smash on Spitwad's Game Cube he had lugged with him. Eventually I headed back off to my room, starting off my blogpost before falling asleep at the computer. It is now 9 am here as I finish this off, considering if I might make it to the breakfast table downstairs before heading out to the event. I think I might just do that. 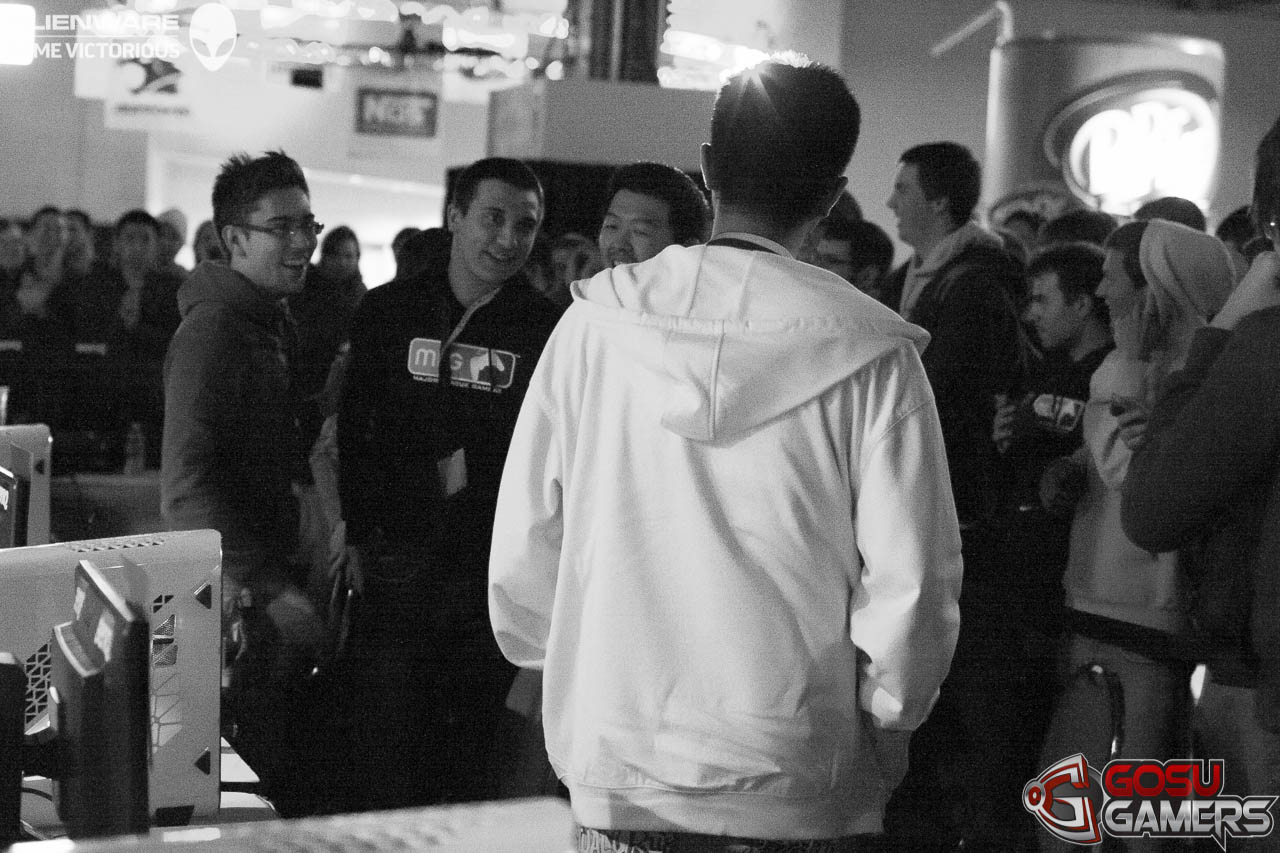 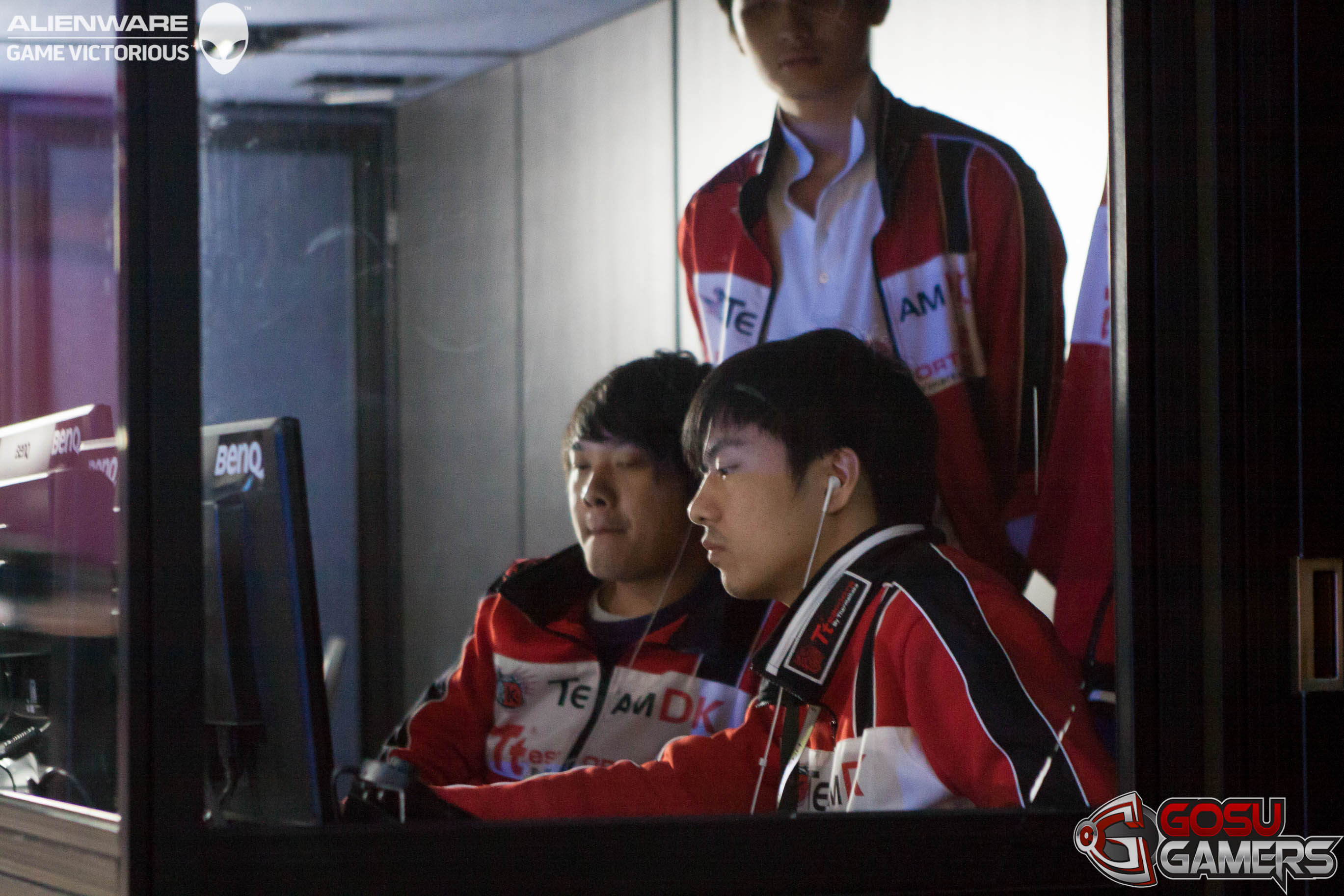 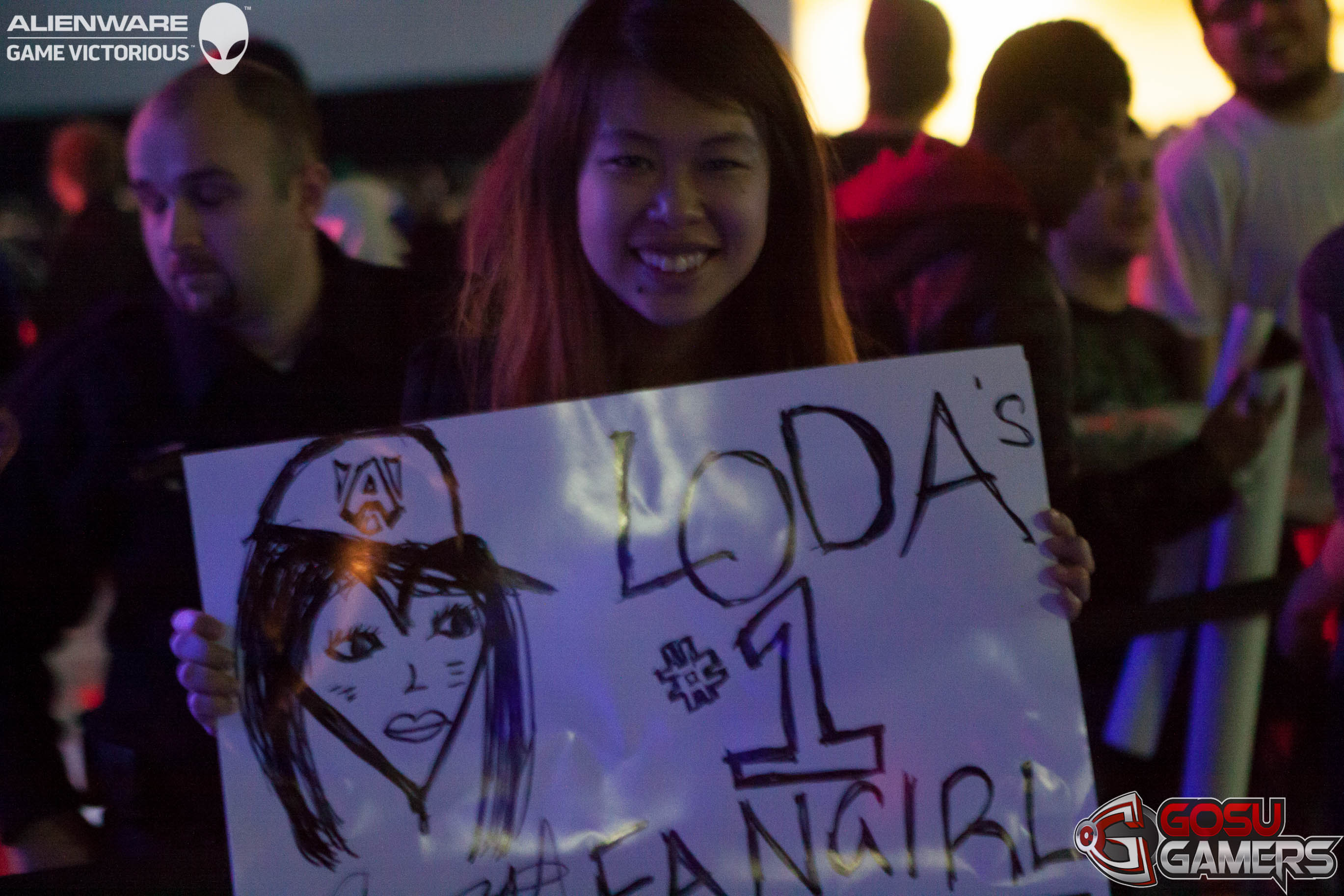 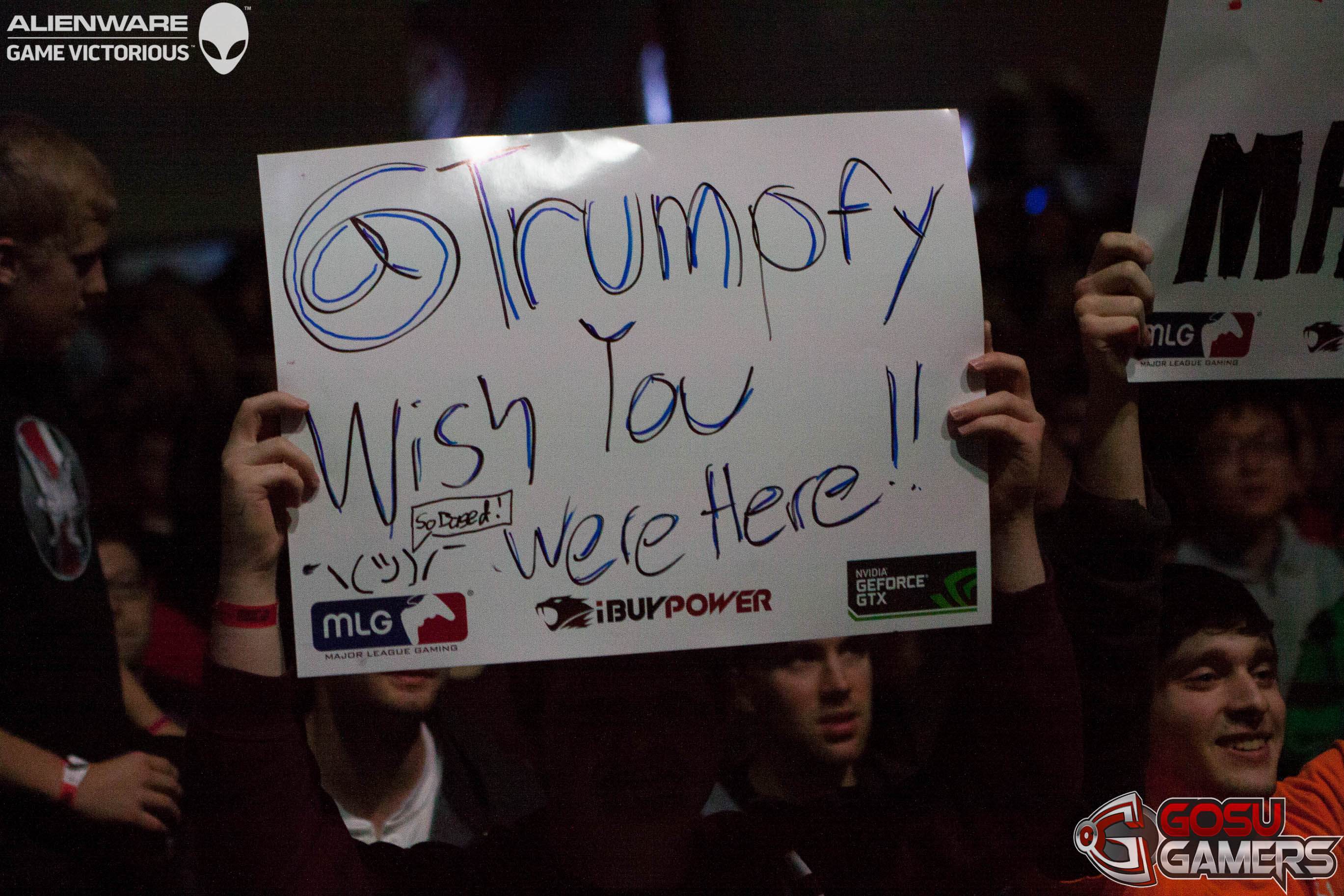