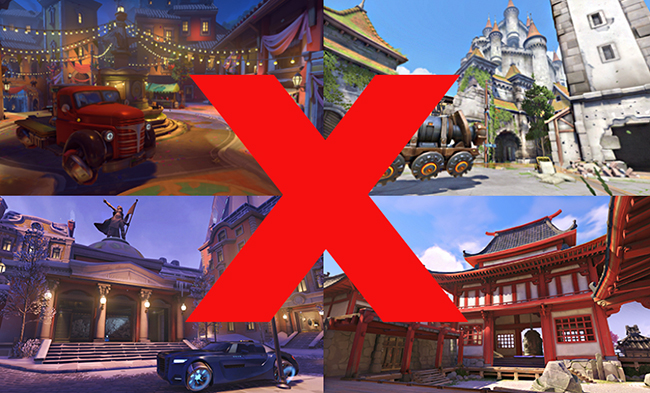 If you could change something in Overwatch, what would it be? You don’t always have to go big. Sometimes it’s the subtle changes that feels the greatest. In this series, we’ll go over some of the quality of life changes that could be made in Overwatch.

Every day, people complain about the map pool in Overwatch’s competitive play. A lot of people seem to dislike control point maps, while others complain about getting the same map over and over again. Overwatch has a fun map pool, guaranteeing different experiences, but sometimes it can annoy you. What if you could have a say in what maps you played?

An option could be added to the game, so that players are able to “ban” one or more maps for their personal queu. If you were to compare Overwatch to other games, there’s inspiration to be drawn. For example, in competitive CS:GO, you can choose any maps you want to queue up for. In World of Warcraft there’s an option for battleground play. There, you can bring up a list of all of the maps/battlegrounds included, and untick up to two maps from the pool. So the easiest and probably the best option would be to just add a list or option, where you can choose one map to ignore, and not queue up for.

The map debate has gotten big in the recent weeks. This has mostly been about tournament play, but people have still voiced their annoyance about in-game competitive play. But it’s a tricky situation. The maps in Overwatch are well done, and constantly get finetuned to make them the best they can be. At the end of the day, however, personal preference will still come into play when talking about the map pool in Overwatch. Nothing the developers can do will make all players love all maps or modes equally.

The upside of this change would mainly be about making players happy. Playing a map that you really don’t like will make you lose interest in actually playing. This gets even worse if you are unlucky and end up playing the same maps over and over again.

The downsides are tricky, though. If a lot of people choose to ban the same map, the players who don't might get a bit longer queue time when do they hit that map. Nothing will most likely change regarding actual rating or MMR, since even though some maps are more attack/defense friendly, both teams always plays both sides.

Another thing we have to think about is Blizzard's vision of the game. The map pool is not that excessive yet, and as mentioned above: the maps do get tuning. It might be better to just support the Overwatch developer team with feedback as to why you do not like something, instead of trying to get rid of it with a quickfix solution like this one. Also, people might not be satisfied with just getting rid of one map. They might be wanting more, and then a slippery slope is in reach.

Do you agree or disagree with these changes? Do you have your own suggestions regarding this, or anything else? Be sure to let us know!

Do YOU think this could be a good change?