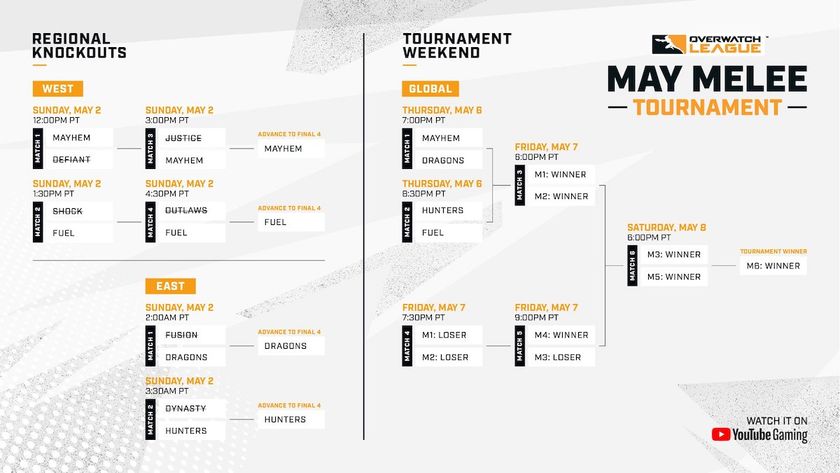 Week 3 of the Overwatch League saw the culmination of the May Melee Qualifiers.

Between Thursday, April 29th and Saturday, May 1st, teams in North America and Asia played their final matches to determine the Play-In brackets for the first tournament of the year.

After a rocky start to the season, the San Francisco Shock fought back in Week 3. The Shock seemed to return to championship form on Friday, April 30th, obliterating the Florida Mayhem in a 3-0 sweep.

Their match against the Atlanta Reign, however, was not so easily won. The Reign forced the series to fifth map, but ultimately, the Shock clutched it out with a 3-2 win. The Shock ended the May Melee Qualifiers as the #3 seed in NA with a 3:1 record.

The Washington Justice were another team with two matches left to play. They dispensed with the Toronto Defiant in a quick 3-0. Still, the Justice proved they still have some work to do when they dropped a map to the struggling Boston Uprising.

Nevertheless, the Washington Justice finished the May Melee Qualifiers with a 4:0 record, and took the #1 seed from the Houston Outlaws.

The Florida Mayhem and Toronto Defiant both went 1:1 on the weekend to finish out the Qualifiers with 3-1 records and claim the #4 and #5 seeds, respectively.

The Seoul Dynasty took convincing wins against the New York Excelsior and the Los Angeles Valiant. The Dynasty were the clear favorites in both matches, but consistency this season bodes well for a team that has struggled with unpredictable performances.

With two 3-0 sweeps, the Dynasty ended with a 3:1 record and stamped their tickets to the May Melee Play-Ins.

The Shanghai Dragons had something to prove in Week 3. What was the most dominant team in Asia last year looked fallible, and even lost at times, to start this season.

On Friday, April 30th, the Dragons went to map 5 against the Hangzhou Spark. The Spark, who have struggled so far, looked stronger this week. Perhaps the Dragons should be expected to win matches like these more handily, but in the end, they still came out on top.

The next day, the Dragons faced the Excelsior and dominated as expected in a 3-0 win. With those two wins, the Dragons finished with a 3:1 record, securing the #4 seed in the May Melee Play-In bracket.

The Play-In matches for the May Melee Tournament were held on Sunday, May 2nd. In Asia, the Shanghai Dragons eked out an upset win against the #1 seed Philadelphia Fusion. Much less surprising was the Chengdu Hunters’ 3-1 win against the Seoul Dynasty.

In North America, the Florida Mayhem looked fierce, taking down the Toronto Defiant 3-0.

Next, the two-time reigning Overwatch League Championship San Francisco Shock faced off against the 6th seeded Dallas Fuel. The Fuel were the only team in the bracket with a 2:2 record and the clear underdog. On Sunday, however, they looked like an entirely new squad and crushed the Shock 3-0.

The Florida Mayhem went on to face the #1 seed Washington Justice and continued to look lethal in their 3-1 upset victory.

Finally, the Fuel faced the #2 seed Houston Outlaws, to whom they lost a five-map series in Week 1. In this rehash of the Battle for Texas, Dallas flipped the script, continuing their rampage and sweeping the Outlaws.

With the Play-Ins completed, the May Melee Tournament will kick off next weekend on Thursday, May 6th. The Shanghai Dragons will face the Florida Mayhem, as the Dallas Fuel take on the Chengdu Hunters.