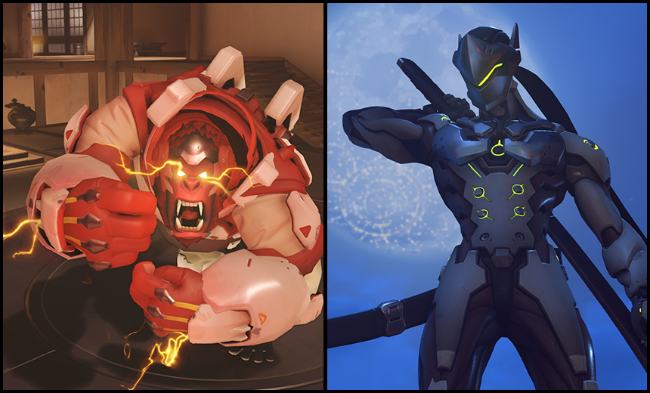 Genji and Winston can be seen relatively often in pro play, but the pair can be used together to accentuate each other's strengths. Genji and Winston both have insane vertical mobility, making them prime candidates as divers—hence the name "Dive Bros."

In order to properly explain why Genji and Winston function so well as a pair, let's take a look at the math. Winston does 50 damage upon landing, alongside a decent 60 damage per second using his Tesla Cannon. Genji, on the other hand, can deal an immediate 50 damage with his Swift Strike, and can follow up with rapid right clicks (28 damage per shuriken). Of course, this game isn't only about math; the numbers coincide perfectly with Swift Strike's passive, which grants Genji a dash reset for each elimination he participates in.

You can likely see where the math leads. Once the pair of divers can pick up a single kill, Genji can finally do his fair share by continually reseting his dash, slicing the opponents for 50 damage every time the player hits the shift key. This duo is especially effective against grouped bunches of enemies, as they can deal damage to multiple targets at once, making short work of the enemy team.

While the damage the pair outputs certainly looks large, you have to take into account that Lucio and Zenyatta will likely be buffing the defending teams, so the damage will certainly not be a straight 60 DPS from Winston in addition to Genji's. Still, the pair functions well, and Genji has enough burst to ensure that Zenyatta and Lucio's presences are not enough to ensure the enemies survive.

While effective under most conditions, Genji and Winston are best used on king of the hill maps or when a fast time is necessary. The pair's mobility allows both members to get back to their team relatively fast, and it allows them to dive the backline fairly easily. They push the tempo early on and can be a nasty surprise for the opponent when they perform a coordinated dive.

Zarya is often seen picked alongside this duo (well, picked in general) due to her insane synergy with divers. Possibly the biggest factor in this pick is her shield; giving either Winston or Genji a bubble prevents them from taking damage when they get to the backline, and additionally allows for avoidance of McCree's Flash Bang, which can be devastating against divers.

Not only is Zarya's bubble important, but the way she outputs damage is key as well. Zarya can choose whether to attack what's in front of her with her beam, or assist Genji and Winston in destroying the backline by throwing her alternate fire in their general vicinity and getting damage off. Of course, any damage that Zarya contributes to the dive combo allows Genji to reset his dash faster than he would otherwise.

Zarya's Ultimate is without a doubt one of the best abilities in the game. While she won't have it early in the game, when Genji and Winston can dive the opposition with their surprise factor, she can build it up with all the damage the attacking team will do on the first push. Zarya's Graviton Surge comes in handy on later pushes, and it helps snowball the game.

Tracer pairs particularly well with the duo due to her insane mobility. While it's completely different from Genji and Winston's, Tracer's mobility allows her to serve as an irritant and distract the opposition. With Tracer poking away at the enemies' health, teams cannot focus as hard as they should upon the divers wreaking havoc, as the squishier members of the team will drop in health fast due to repeated headshots.

While Tracer cannot jump up ledges like Winston and Genji, she can dominate the low ground and peel people away from the main fight. Additionally, if a fight breaks out on two fronts, Tracer ensures that damage is not lacking on without Genji and Winston's presence, as Zarya with medium charge is not enough to threaten enemies.

Roadhog is a relatively good counter to this type of dive strategy due to his specific kit. With his hook, he has the ability to grab Genji and stop him in his tracks. Doing so is particularly effective if Genji wastes his dash or deflect, as he will be stuck with no counterplay and the attacking team will face an immediate 5v6. He's also good against Winston because his shrapnel shreds bigger targets. Without his barrier, Winston is defenseless against Roadhog bullets, so unless Roadhog can be removed quickly by the attacking team, a dive against the piggy will likely fail. Of course, the Roadhog player has to ensure that he takes Zarya's shield into account, as if his hook is blown too early, his team might suffer the consequences.

Outside of specific counters in terms of heroes, the best way to play around a diving combination is to focus the diver that does not receive the Zarya shield (as only one is available). Usually Winston will get the shield, as Genji has his deflect, and Winston is just an easier target to hit in general. As such, retreating from the incoming Tesla Cannon and focusing down Genji is usually favorable, but the defense has to make sure they don't fall prey to a deflected Flash Bang. Winston is fairly easy to burst down once the bubble wears off because he's such a large target, and Zenyatta's Discord Orb makes his chances of survival even slimmer should a dive fail.

While the two picks are used situationally, they work incredibly well together. They push the tempo of games and set the pace for the defense, meaning that opposition must play reactively. It's no surprise that pros favor such a setup to take control of games, and it's not a strategy only limited to pro play. If you're ever in need of a composition that will throw the opponent off the game, look no farther than a team that supports a pair of divers like these two!

Have you tried playing with the Genji and Winston combo?