Orange beats LGD International 2-1 in the G-1 League Qualifier. This leaves LGD.int reliant upon LGD.cn winning to make their way out of the group stages. Orange, with this victory, are quarenteed passage into the play-offs.

According to G-1 League rules, a points tie will be settled by the teams' previous encounter. As the top 3 teams from each group go through, LGD.int only have an chance of proceeding if their friends from LGD.cn win their game against Rattlesnake. The group currently stands like this: 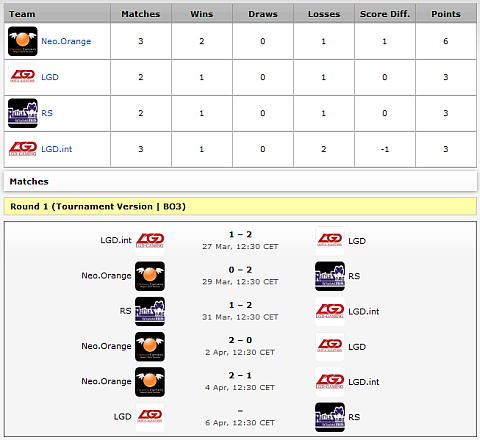 The next game in G-1 Asia group A will be a crucial game to determine which three teams secure themselves in the top three and keep their G-1 hope alive. 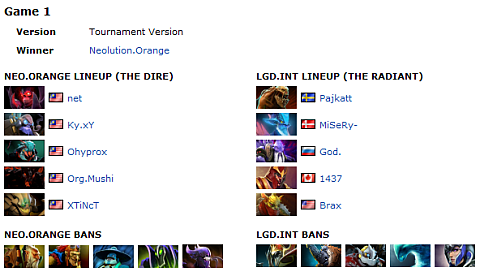 LGD ran a aggressive trilane with Lifestealer, Silencer and Leshrac up against Orange's trilane of Shadow Fiend, Sand King and Shadow Demon. This immediately bore fruit when LGD grabbed the first bloom on Mushi's Shadowfiend, leading to them dominating the top laning, killing Mushi three times in total during the laning phase. LGD.int looked to further their domination by starting a huge teamfight in the top lane at 6 minutes, however it blew up in their faces when the rotating weaver was to turn the fight around, finally giving Orange a foothold in the game.

While the game still looked to be favouring LDG.int, Orange were finding farm on their core heroes at an alarming rate, while Lifestealer had slowed somewhat. Tinker managed to pick up his Boots of Travel at just 12 minutes and with his constant teleporting, he was able to blunt the aggression of LGD, creating a stable environment for Mushi to farm.

Remarkbly soon after their poor start, Orange were looking ahead. Repeated kills on the Lifestealer shove him even further down the scoreboard, while the Orange trio of Weaver, Shadowfiend and Tinker were comfortably the top three farmers. While LGD capitalised well on some errors by their opponents, soon Orange were able to take Roshan and push to win the game without much trouble. Their farm was simply too much for LGD to deal with and there were too few solutions for holding back the tide. 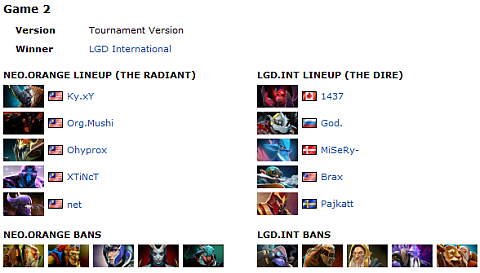 The laning stage in our second game of the day was anything but standard. Both teams appeared to be running strange dual lanes -- Orange fielded Magnus and Bane against LGD's clockwerk bottom, and Enigma and Nyx top against Silencer. Meanwhile LGD ran Gryocopter mid against Mushi's Shadow Fiend with the support of Shadow Demon and Leshrac who divided their time equally between the mid lane and the top lane.

They found the most action in the middle though, managing to (yet again) grab first bloom on the Shadowfiend and another two kills before 10 minutes. Meanwhile, Orange were comfortably winning the bottom lane, having picked up a few kills on the Clockwerk. Despite this, with their only carry struggling in the middle lane, Orange decide something needs to be done. Firstly they rotated mid and, as five, pick up a double kill. Then the team moved top where they won a big team fight convincingly. As this happened, Mushi managed to die yet again, but somehow found ridiculous amounts of farm anyway, giving Orange hope that they could begin to take control of the game.

LGD.int were in dire need of pulling themselves together. They began move around the map as a five, and soon had taken all of Orange's outer towers. They struggle, however, to push into the base. Their first big attempt leads to the tier three tower falling, but their entire line-up is immediately decimated by a huge Reverse Polarity.

LGD.int are therefore left in somewhat of a pickle. Their movement as a five has left their carries unable to keep up with Mushi in terms of farm; yet pushing into the Orange base seems impossible. They wisely decided to step off and bring the game to a ludicrously stable 30 minute period where nobody seemed to do much but farm. LGD took a couple of Roshans but ultimately seem uninterested in doing anything until Gyrocopter had picked up enough farm to just roll the opposition. They took a teamfight around the Roshan pit; with the increasingly scary Mushi dropping quicker than expected under the global silence, but Orange were able to hold with buybacks.

The momentum of the game briefly shifted in favour of Orange as they sneaked a Roshan, but little happens until the Aegis has decayed and it was time to contest the next Roshan. At 66 minutes into the game a huge teamfight ensued around the pit with both carries having to buyback. LGD.int emerged victorious, Gryocopter finally bought his divine rapier and they pushed to take barracks and the game four minutes later with Mushi unable to click them down fast enough and the double global silence neutering the Orange support.

The final game in the series quickly looked to be favouring Orange as their trilane of Leshrac, Nyx Assassin and Shadow Demon was able to pick up a double kill as the creeps spawned. They proceeded to dominate the lane, picking up even more kills and leaving Pajkatt weak and ineffective on his Gyrocopter. Meanwhile Orange's main carry, Outworld Devourer was having an easy time mid against the Clockwerk.

By 8 minutes Orange are 7-0 up and with LGD.int failing to succeed in their costly gank attempt on OD the game looked increasingly hopeless. However, they economised, buying bracers on Gyrcopter and increasing their discipline. Orange helpfully started making mistakes and soon LGD.int are almost back in the game.

However an amazing teamfight at 25 minutes was won convincingly by Orange and it quickly became clear that when Orange unified, they had an unassailable lead. Eventually their item advantage in every position became too much, and with an Aegis under their belts Orange went for the final push at 31 minutes.