Super: 'I hope we make it into top three at The International' 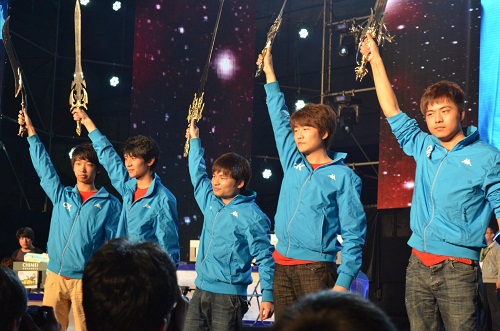 DK's former glory, World DotA Championships 2011
Two months ago, we said DK, along with Zenith, had the highest chances at The International out of all the teams participating from Asia (we did, right here). But right now - we don't know. Every team is equally prepared, but DK is known even within the Chinese competitive scene to be one of the most disciplined professional teams around. We talk to the team's solo mid player Xie 'Super' Junhao to find out more about their strict regimen.

Surely, the Chinese Galacticos won't disappoint us in Seattle - or will they?

Take me to the interview!
An excerpt of our interview with Super, August 20, 2012

How well versed are you in English? Imagine this: TobiWan approaches team DK at The International and he says, 'So Super, what's been up with you?' What would you say to him?

-"I’m a total blockhead when it comes to speaking English, so I guess I’ll probably just stare at him blankly. *grins*"

Haha. Where is your team located now? And how have preparations been going for The International for DK?

-"We’re back at our training facility in Yunnan already. Well, we make sure we get up very early everyday to start our preparations for the event and we play about three to five Bo3 matches a day, at least."

I see that you bought tickets to watch The Defense, StarSeries, and ECAL, among others through the in game client so I would assume that you are familiar with what is happening in the Dota 2 scene in Europe and North America.

From current performance, who would be DK's toughest opponents at The International and why?

-"I would say CLG. Their performance recently has been spectacular and we haven’t been able to beat them in our scrims."

I think you would agree with me that Na`Vi are one of the top contenders for The International. The last time your team played Na`Vi was at World DotA Championships 2011 and that was on DotA. Your team was dominating the Chinese scene then yet Na`Vi was the only team to take a game off DK with a surprise Pudge pick in game two.

Tell us abit about what went through your mind after that game. How has your impression of Na`Vi been since that defeat?

-"Na`Vi are definitely one of our strongest opponents at The International, and I feel that in the Dota 2 competitive scene at least, labelling them as the juggernauts from Europe cannot be overstated at all.

It’s been awhile since we played them at World DotA Championships, so I can’t really remember what was going through my head back then. The impression that Na`Vi gave me from our only encounter was that their understanding of DotA as a game was on a whole new dimension from the way DK understood how DotA was meant to be played. It was eye-opening."