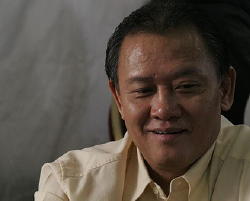 Men "The Master" Nguyen is a vastly experienced Vietnamese-American professional tournament player. He has won 7 World Series of Poker bracelets with 70 cashes. His most recent WSOP bracelet was in the 2010 $10k Seven-card stud tournament, a game for which he has particular affinity. He has made four WPT final tables as well. Nguyen's total live tournament winnings exceed $9.7 million. He won the Card Player Magazine Player of the Year award in 1997, 2001, 2003, and 2005. Nguyen was born in 1954 in Phan Thiet, Vietnam and resides in Bell Gardens, California.

Men "The Master" Nguyen has had a profound affect on the Vietnamese-American poker community, influencing and inspiring many future poker players. He is a complex character, at time charming and at other times boorish, but never boring. Nguyen in one of the true tournament grinders, playing a serious volume of all level of events each year.

Nguyen profile piece and funny episode at the WSOP: