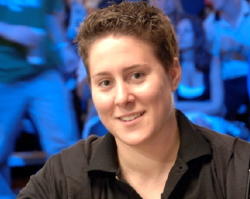 Vanessa Selbst's 2010 was the most successful year in the history of a woman poker player. She won over $2.8 million dollars, with two titles in the NAPT Mohegan Sun Main Event and the Partouche Poker Tour finale. She is regarded as one of the top young women players in the world having won her first WSOP bracelet in 2008 in a Pot Limit Omah event, along with 8 in the money WSOP finishes. She is a member of Team PokerStars with total live tournament winnings that exceed $4 million. Selbst was born July 9, 1984 in Brooklyn, New York and currently resides in New Haven, Connecticut.

Selbst appreciates the intellectual stimulation of her Law degree, but craves the human interaction and competition afforded her in the poker world. She has a unique and aggressive style all her own.

"I love the fact that I get to play a game that I love as my job, and I also love the freedom the game allows me. There's nothing quite like setting your own schedule and making all your own rules."
"I also love the fact that I can be totally out in poker and not worry about any repercussions. Because poker is a game of individual merit, there are very few people that can get in my way out of bias or bigotry. At the end of the day, the cards speak. I think it's important that there are openly gay role models for people and I feel lucky that I get to be the subject of media coverage and be a good example for lots of people who may be struggling with their sexuality."
"I would say that people should start playing online poker first if you are trying to play professionally. Even if your bankroll is super small. You can play a lot more hands when you become comfortable with playing several tables at once, and putting in significant volume is the best thing to improve your skill. Making friends who are learning the game who you can discuss strategy and joining a poker forum and training site will help you get better a lot faster."