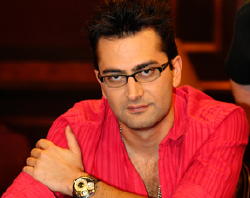 Antonio Esfandiari is one of the most popular and charismatic poker pros today. He has won one WSOP bracelet with 13 money WSOP finishes. He won the 2004 WPT L.A. Poker Classic and the 2010 Doyle Brunson Five Diamond World Poker Classic with two more final tables and eight money finishes. He has over $4.4 million in total live tournament winnings. Esfandiari has appeared on almost every TV poker show at some point; Poker Superstars, High Stakes Poker, National Heads-Up Poker Championship, Poker After Dark and many other shows. He is a lead featured pro with Victory Poker. Esfandiari was born December 8, 1978 in Tehran, Iran and now calls Las Vegas, Nevada home.

Antonio "Magic" Esfandiari is a very charismatic poker player with a bright future. He has learned the art of being a showman and talented player and reaped the benefits. Esfandiari credits magic for giving him a leg up in poker because of his ability to gauge human behavior and read players.

Esfandiari video of his early WPT highlights, his coin chip tricks and a fun hand where he calls out Phil Laak's hand: