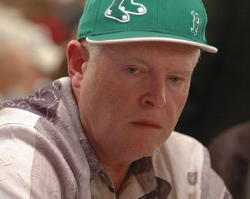 Dan Harrington is a legend in the world of tournament poker and a member of the Poker Hall of Fame. His biggest accomplishment was winning the 1995 WSOP Main Event along with another event bracelet that year. But before that, he finished 6th the year that Johnny Chan won his back-to-back WSOP titles. He won the 2007 Legends of Poker WPT title and has five WSOP final table appearances to bring his lifetime winnings to over $6.6 million.

Harrington's back to back Main Event final table appearances (3rd and 4th place) in 2003 and 2004 is considered one of the greatest accomplishments in World Series of Poker history. Behind Doyle Brunson's Super/System, Harrington is considered the most influential poker author for his series of books Harrington on Hold'em. Harrington was born December 6, 1945 in Cambridge, Massachusetts and currently resides in Santa Monica, California.

"Action" Dan Harrington has always shied away from the public spotlight. He considers himself a businessman first and a poker player second, playing a very limited schedule of events. He plays for the money, not the fame. Although known as a tight conservative player, he has been known to pull off some big bluffs at opportune times playing off his table image.

Videos of Dan Harrington pulling off a squeeze, winning a cash hand and an Irish interview: