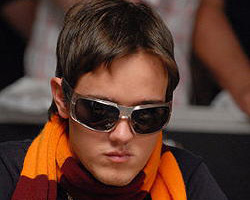 Dario Minieri is a popular Italian poker pros who many feel has the brightest future from Italy due to his youth. He won a WSOP bracelet in 2008 at the age of 23 cashing for $528k. He has made final tables on the WPT and three on the EPT and has lifetime live tournament cashes of over $1.8 million with over $760k from online play at PokerStars alone where he is a Team PokerStars Pro. Minieri was born in 1985 and resides in Rome, Italy.

At only 25, Dario Minieri has a bright future in poker. He is a stylish, flashy and aggressive player. Minieri ranks 5th on the all time Italy money list, behind only Salvatore Bonavena, Max Pescatori, Filippo Candio and Jeff Lisandro. He enjoys soccer, watching movies, and driving around in his well-earned Porsche.

Minieri in an all-in hand on High Stakes Poker and :