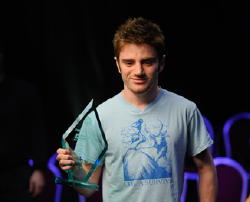 Ashton "theASHMAN103" Griffin is one of the top young cash game players in the world. He is fearless, aggressive and experienced, despite having little TV or live poker experience. He found his eventual niche in heads up NLHE and rode it to incredible success online.

He is considered one of the best HU and PLO cash game players in the world at only 22 years of age. He has won and lost millions, but seems to utilizing his experience and increasing maturity to climb to the heights of the poker world on his own terms. In 2010 he won over $1.2 million after winning nearly $4 million in 2009. He has also won some big tournaments including the $25k buy-in NAPT High Roller Bounty Shootout in February 2010 for $460,00. He also won the spring 2009 FTOPS $25k entry Heads Up event for $551,250.

Griffin is known for some infamous prop bets:
Currently balancing wrestling and poker, Ashton "theASHMAN103" Griffin is poised for tremendous success in the future having seemed to have calmed his inner demons that caused his to lose considerable sums tilting or in non poker prop bets and gambling. His new discipline has been evidenced by his steady profitable play in limited time in 2010. The future is bright for this young talent who is only turning 22 in December.
Addressing his degen tendencies “I know I’m a degen but I’ve always had enough control to just drop and grind when I needed to and always had enough skill to have a good bread and butter game when grinding was the option.”
A video eliminating Chris Moneymaker and an interview with Griffin at 2010 WSOP: