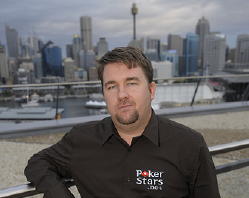 Chris Moneymaker is the every day guy who shocked the world by winning the 2003 World Series of Poker Main Event. He was the first person to become a world champion by qualifying at an online poker site or who didn't consider poker his vocation. His win is created with creating the "Moneymaker Effect" that led to the boom of poker in the U.S. and eventually around the world. He is a Team PokerStars Pro who has over $3 million in live tournament winnings. Moneymaker was born November 21, 1975 in Atlanta, Georgia growing up and currently residing in Nashville, Tennessee with his wife and daughter.

Chris Moneymaker has had modest success since his infamous WSOP win, but he remains a talisman of public fascination for paving the way for the common man to reach the heights of poker, especially through the internet.

Moneymaker's most famous bluff against Sammy Farha that helped him win the 2003 WSOP Main Event: