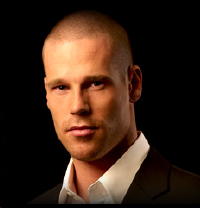 Patrik Antonius is one of the world's top cash game poker players. While Antonius plays a very limited live tournament schedule, he has won an EPT, has 12 WSOP cashes, and over $2.8 million in live tournament winnings. Antonius is a Team Full Tilt pro who plays regularly at the highest stakes online. He is considered a heads up specialist, with PLO his favorite game, but also very proficient at other mixed games. Online estimates of his winnings online under various names are over $10 million. He has appeared on numerous TV poker shows like High Stakes Poker, Poker After Dark and Million Dollar Challenge. Born December 13, 1980 in Helsinki, Finland, he now calls Monte Carlo home.

Patrik Antonius has taken his distinctive runway model looks, athletic prowess, keen intellect and competitiveness to tremendous success in the poker world. While he is not the most extroverted player or most eloquent in the English language, Antonius is much sought after by the media and greatly feared at both the highest stakes virtual and live poker tables around the world.

A couple of hands demonstrating Patrik Antonius master reading ability (one against Phil Ivey, one against Erick Lindgren):