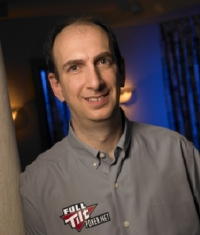 Eric Seidel is an American professional poker player from Las Vegas, Nevada. He has won eight WSOP bracelets and a WPT title. He recently won the biggest buy-in tournament in history, $250k, at the Aussie Millions for $2.5 million. He has 60 WSOP cashes and over $13.1 million in live tournament winnings for third all time behind Daniel Negreanu and Phil Ivey. He finished second to Johnny Chan in the 1988 WSOP Main Event, captured in the famous scene from Rounders. In 2010 he was inducted into the Poker Hall of Fame. He was born November 6, 1959 in New York City.

Some of Seidel's amusing Tweets:
Erik "sly" Seidel is an extremely respected poker player who has typically shied away from much public attention. He has always been reticent about showing his hole cards or teaching other players too much. He is a member and part owner of Team Full Tilt.