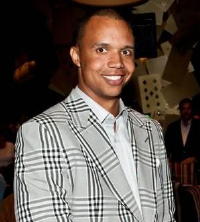 Phil Ivey is widely considered the best all-around poker player in the world. At the age of 34, he has won 8 WSOP bracelets, 1 WPT title with 9 WPT final tables. He is first on the all-time money winners list in tournament poker with nearly $14 million. All the more remarkable for a player who considers cash games his main game. Ivey is a leading Team Full Tilt pro and owner. Phil Ivey was born February 1, 1976 in Riverside, California but moved to New Jersey three months later where he remained before relocating to Las Vegas in his early twenties.

Phil Ivey has reached the pinnacle of poker at a young age. He is a fearless and versatile poker player, be it tournaments or cash games. He has always had a very characteristic and hard to read poker face at the table. Ivey is one of the most respected online players for his fierce discipline, game selection and stop loss management online.

He has occasionally suffered from a lack of concentration and motivation at times when the tournament stakes weren't big enough, so he has upped the virtual stakes by betting big prop side bets against other players to create more motivation in recent years. He made the final table of the WSOP Main Event several times, most recently 2009. He recently returned with a sizable win from the Macau high stakes games and he will surely be pushing his gambling limits again very soon.

One of Phil Ivey's most famous bluffs at the Monaco Million event in 2005.