Lt. Morales 'Medivacs' her way into the World Championships

Lt. Morales doesn’t come by as a top support pick in the competitive scene, let alone a solo support. But, to everyone's surprise, Cloud9 picked up the StarCraft medic in their second game against GIA in the World Championships. So what allowed Cloud9, from North America, to secure the win against GIA, from Taiwan, in the second game of the matchup?

Lt. Morales can be a very powerful support if left alone. She is known as the ‘Sgt. Hammer’ of supports because of her monstrous healing numbers when uninterrupted.

Main heal
Her main healing ability is from her ‘Q,’ the Healing Beam. The targeted ally will be healed for a moderate amount of health per second as long as they are within range. This ability can be re-targeted on other allies and Morales can still use abilities, making her quite the support. This ability can bring great sustain and deny kills for the enemy team.

Support supplement
Her ‘W’ ability is ‘Safeguard’ which gives resistance, sort of like a minor ‘Hardened Shield.’ It grants 25% reduction in damage taken for 3 seconds. This is a really useful ability to be paired up with tanks. With a powerful front-line, Morales can keep the tanks going for days.

Defend allies
The last ability for her kit is the ‘Displacement Grenade,’ which knocks enemies back whilst doing a small amount of damage. This ability can be used for many things such as disengage, poking or even stealing camps. Morales can use this ability defensively to get enemies off of her allies. It can therefore be offensive and defensive depending on situations.

Team mobility
Morales has the option to choose Medivac at level 10 which calls down a Medivac ship to transport allies to any location (within range). This ultimate is excellent for getting allies from one place to another. It can also be used for escape or retreat. Overall, it is a speedy and fun ultimate to use that enables insane mobility.

Lack of escape
Lt. Morales has a couple weaknesses that hinder her ability to be a top tier pick. Firstly, she lacks mobility and escape. Apart from her Medivac (which is her level 10 ultimate), she has no means for escape. This makes her a vulnerable target in team fights if the enemy team has a stun-lock or powerful engaging combo.

Self heal
It’s inevitable that supports get targeted in team fights. Most supports can fend for themselves and heal themselves. Morales can’t. If Morales is targeted, she will be running away like an injured gazelle. Her only self heal comes from her trait, which is similar to Muradin's ‘Second Wind’ trait. Her trait, the Caduceus Reactor, heals when she is out of combat for 4 seconds. This is simply not enough. 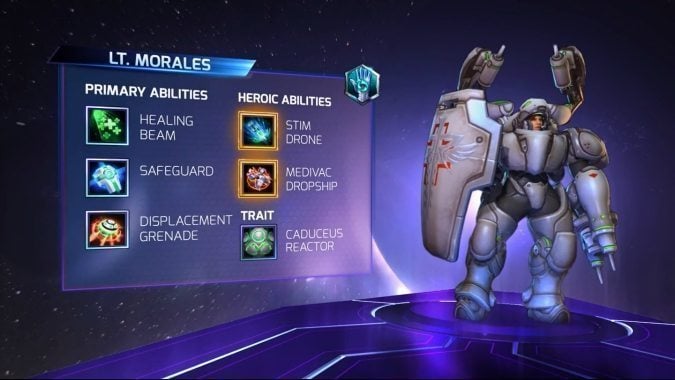 How did Cloud9 make Morales a success?

Dunktrain from Cloud9 played Morales amazingly, ensuring that his team would stay alive in all team fights. The success of the game is behind Cloud9's draft. They played in Sky Temple, which is a big three-lane map. This is a great map for the Medivac as it can be used to take objectives, go to boss, or back door to core. Let's take a look at their draft:

Sylvanas and Jaina are both ranged heroes, this ensures that they can attack from a distance ultimately allowing Morales to focus her healing on the tanks. Whilst Morales heals the tanks, Jaina can bring lots of burst damage and Sylvanas can put out a silence with her ‘Wailing Arrow.’ So as the tanks keep the enemy at bay, the damage dealers can put the enemies to rest whilst Morales ensures her allies are all in top shape. Overall it was a great draft by Cloud9.

Team GIA had attempted to counter Cloud9's Morales pick with an Anub’arak. Anub’arak can penetrate into the enemy backlines with his ‘Burrow Charge.’ Unfortunately for GIA, Cloud9 had protected Morales very well and had very good follow-up after Muradin's stuns. Additionally, Cloud 9 was able to target Kaelthas and Valla very easily and destroy them with Jaina and Sylvanas, after a stun-lock from Muradin. As you can see from the draft, GIA had a great composition. Kaelthas and Valla have the potential to deal massive damage. Kaelthas with his chain bombs and Valla with her ‘Hungering Arrow.’ However, Morales had managed to heal up any hero that was targeted by Kaelthas or Valla and Cloud 9 had ensured that the enemy assassins wouldn’t get to deal their damage.

With a powerful heal, damage reduction, and Medivac, Morales had brought a lot to the table in this game. It is very exciting to see new heroes and compositions played in tournaments, more so to see it on the World Stage. Well done to Cloud9 for pulling off the composition and showing that Morales can be used as a solo support in such an important match.

Do you think Morales will 'Medivac' into more competitive play?

Of course, all aboard!
Thank you for voting!
No, abort abort!
Thank you for voting!
Arief “NeyJr” Zul
Love seeing the growth of the Heroes e-sports scene. I'm hoping to contribute as much as i can both to the scene as a whole and my local scene. I think a Jaina quote would be appropriate, "I'm here to help!"
Share Tweet
225 people reacted to this post

SolidJake: "But then I played Heroes... That changed everything!"

Grubby: "I was very glad to read that people loved my commentating"