Hearthstone is a game with an ever growing number of mechanics. Recruit, the act of summoning a minion from the deck, was added as a keyword for Kobolds and Catacombs. We also got the spellstones, “Quest-lite” cards that would reward you for doing a certain task. However, not every mechanic in Hearthstone's history has been a success. Some mechanics have seen little impact and have since stopped appearing in expansions. For this article series I will try and go over some of those mechanics and explain why they fell short.

One of the best examples of this is consistently applied Health, or just Aura Health.

Most of the time, when minions gain bonus health it will be from an Activated health source. “Ignition Health” as I call it comes from any effect that activates once, typically a battlecry or a spell buff. These cards put on a buff that is applied once and that buff sticks to the minion till the minion dies or is silenced.

Continuously applied health, on the other hand, originates from an aura, hence the term aura health. It is one of the most unintuative and sparsely used mechanic in the game. Outside of adventures, it only exists on two cards in all of Hearthstone, Stormwind Champion and Southsea Captain. Of course with Patches the pirate around, players get plenty of exposure to the latter card. 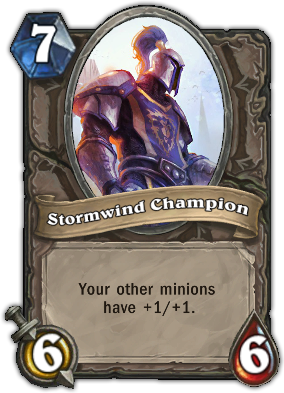 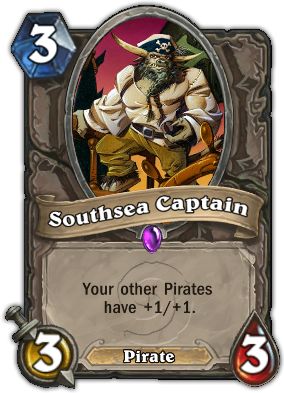 Last of their kind

These cards are the only modern examples, but it didn’t used to be like this. The aura of Murloc Warleader also gave health until recently and during the alpha of Hearthstone, Blood Imp gave a global friendly health aura while Frostwolf commander gave himself contentiously applied health and attack. Through various patches, these cards were all changed to ignition health or had their health component straight up removed.

There are no further examples in standard. Of the 942 cards released since the launch of Hearthstone, only one other card has featured aura health, Mal'ganis, which has long since gone to wild. No others.

Consistently applied attack works just fine, and has been a mechanic seen plenty of time. Flametongue totem and Dire Wolf Alpha are examples of aura attack and in recent times we have seen other examples of consistent attack gain such as tar creeper and co. This causes some weird interactions with Paladin's ability to directly set attack through cards such as Aldor Peacekeeper. However this doesn’t occur that often and direct manipulation of attack is rarely relevant. Everyone manipulates minion health though and that is when unintuative interactions become a massive problem.

Mechanically there are two problems that plague aura health.

Aura health is continuously applied, so it will not be overwritten by effects that set a minion's stats to a certain value, like Equality. Instead the buff will be reapplied on top of said value.

This was a massive problem with the card Blood Imp, which in the beta gave all friendly minions +1 health continuously. Aggressive warlock was already a huge powerhouse, having two other powerful one-drops, Flame Imp and Voidwalker. Having the Blood imp granting favorable trades and protecting the board from equality, one of the few cheap mass removal at the time. It just turned out to be too much. Blood Imp was harshly nerfed and aggressive warlock would take a dive until being largely reinvented as Zoo.

The second problem is that aura health is much more prone to dissappearing. The only way to remove ignition health is through silence, an interaction that only appears rarely. Aura health, on the other hand, disappears whenever the origin of that aura is removed from the field.

This becomes an issue since Hearthstones implementation for removal of bonus health is somewhat unintuative . Essentially a damaged minion will never lose health from losing bonus health, regardless of whether the bonus health was applied before or after the minion took damage. The only exception is when a minion's current health exceeds it’s original maximum health, at which point the minion is simply set to maximum health.

Now, in my opinion, the intuitive way for bonus health to work would be like a shield in Starcraft 2 or Heroes of the storm. Once a shield in those games expires, the target is returned to the same health total as prior to when the shield was applied. However the shield takes all damage that would be taken. In the same vein bonus health would only matter if it is used up by taking damage. This means that previously inflicted damage would be preserved on the affected minions once the aura turns off.

I think the reason Blizzard didn’t go with this implementation is found on the programming side.

I don’t know Blizzards source code, but I suspect that the current implementation for bonus health works so that when it is removed, it will also remove the same amount of damage from its targeted minion, if possible. This is a much simpler implementation than having to keep tabs on what bonus health is spent and what is not. Of course, SC2 and Heroes of the Storm do this with shields, but these are games with data structures several orders of magnitude more complex than Hearthstone's.

Going forward, I expect to see continued dismissal of this mechanc. Aura health was a mess from the day Hearthstone launched its beta. Blood Imp let aggressive Warlock decks bypass Equality-Pyromancer combinations - a very much intended weakness. Frostwolf Commander would have an impulsive health total that would just keep going up and down and, with Patches on the loose, everyone still gets a constant dose of Southsea Captain. While all of this was happening no one was really able to get a grasp on whether this mechanic was working as intended. To this day Stormwind Champion has an entry on Blizzards “Working as intended, not a bug” post on the Battle.net forum.

As a mechanic. it has been unintuative, overpowered and disruptive. This mechanic has not brought anything positive, and Blizzard should simply keep their current trend and let it die.

Some people may consider this an act of simplifying Hearthstone, but I don’t see it like that. Rather it is refining of the game. A refining that should have occurred during the beta, when it became apparent that this mechanic was not going to work well. Instead, this mechanic still lingers barely, on only two remaining cards. I would not be surprised if that has been reduced further come April.

Stefan “Sumadin” Suadicani
Editorial for Gosugamers Hearthstone. Been playing Yu-Gi-Oh for nearly a decade and have played Blizzard games for even longer than that.
Share Tweet
7 people reacted to this post