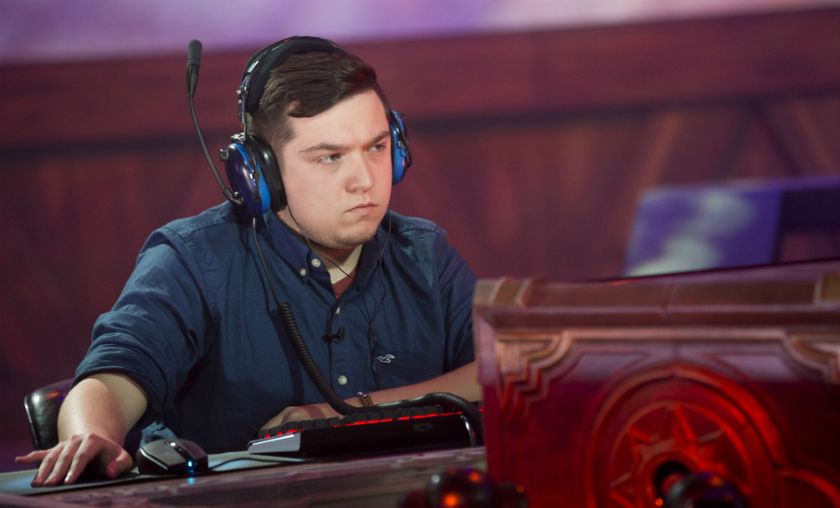 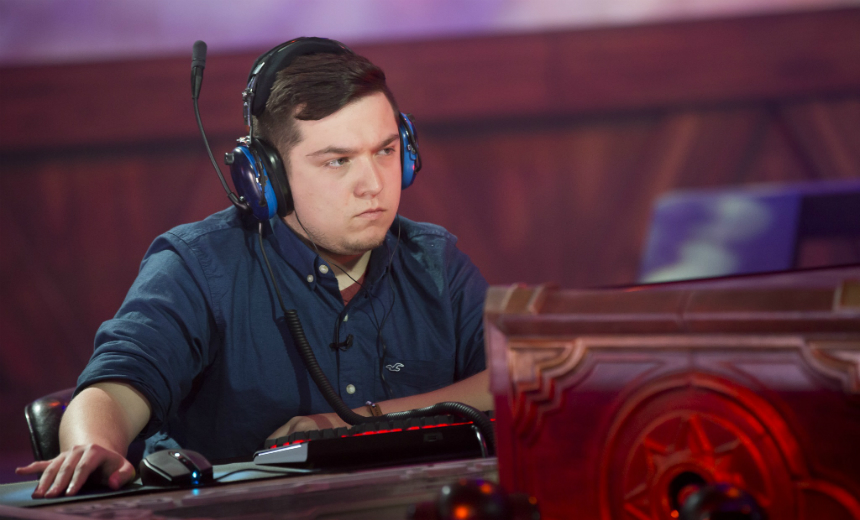 In Hearthstone, there is a certain group of players that's known by nearly everyone who follows the scene. A part of that group focuses mainly on streaming, of course, with names such as Kripp, Amaz and Savjz jumping to most people's minds. A second part of that group solely competes, a group to which players like StanCifka and GeorgeC belong. Finally, there is a seemingly ever-growing hybrid group, consisting of players who compete regularly, but stream to have a reliable source of income too. Think of ThijsNL, SjoW and Dog, for example. These three facets of the Hearthstone playerbase have almost always had the same names getting public attention, though sometimes a players' focus has shifted.

Every now and then, however, someone new breaks into this group and claims a position within the community. Early 2015 was when Lifecoach broke out, and despite his recent feelings towards the game, he still is inseparable from Hearthstone. Just last year 'Young Savage' Amnesiac became the Americas Winter Champion, and he too has his name bound to the game.

During the Winter Championships 2017 another American is looking to find a spot amongst the greats. With the Americas Winter Championship title already claimed, DrJikininki's path to glory couldn't have had a better kickstart. He joins Matthieist on the final day at the Bahamas for a talk about his break-out in competitive Hearthstone and what the future will hold for him.

With me here is DrJikininki, how are you man?

Unfortunately you didn't make it to the later stages of the Winter Championship...

Yeah, it's a bit unfortunate. But you know, overall I think I played fairly well. It happens, it's a card game, so I'm not too upset about it.

Do you have experience with other card games as well, then?

Yeah my experience with tournaments comes from playing other games, like Yu-Gi-Oh! for example. I started playing it when I was around 12 years old, but just quit it recently to pursue Hearthstone. Pursuing Hearthstone has been a great decision; you can see where I am now. I also love playing table top games, games to enhance your mind.

When did you decide to pursue a career in Hearthstone?

I played it casually around the time Blackrock Mountain came out. I knew about it before, since my brother was playing it in beta and introduced me to it. I didn't really play it until Blackrock Mountain came around the corner, which is when I decided to pick it up and play it a little more seriously. I didn't grind ladder too much or do any open cups, though. Then Whispers of the Old Gods came out and that's when I really wanted to be a competitive player. I started investing money into packs to get the collection I needed and played in open cups I could enter. That really marks when I switched to a competitive approach.

That's amazing, being able to get to the highest stage in a relatively short amount of time.

Oh yes it feels great to get validation on your name. Before this people might've known me from playing against me on ladder once or in an open cup or something. Now people from everywhere, from every region have seen me and they now know my name. It's a great feeling to have that out there. I'm really excited to see where I can take my name, and where I can keep going with it.

It feels great to get validation on your name

Well you're going to take a very long name with you!

[Laughs] Well you can just call me Dr J, don't worry about Jinikinki too much.

Where does the name actually come from?

When I was playing games with my father we played an FPS, and were looking for a clan name. We looked up mythological creatures and then when we scrolled through the names we saw some names we recognized, but we also saw the word 'jikininki'. When I see that word I just get the feeling of figuring out what it is, because it's such an odd word. So I found out that it was a greedy, impulsive, selfish soul, which of course is totally me, right? That's just who I am. [Laughs] A greedy impulsive soul who is doomed to the earth, lost in itself and goes around eating people.

So yeah that's very fitting for me of course. The 'Dr' part I added because when I was younger I wanted to be a doctor.

I imagine you still do other things besides Hearthstone, though.

Right now I'm a college student. I had to withdraw for this event and other personal reasons, but currently I'm at Virginia Commonwealth University. Go Rams!

Other than that I work part-time either with my father or at my job, or I'll enjoy hanging around with people. It's basically Hearthstone, school and work. [Laughs]

Are you able to balance it all well?

Well it's a struggle, sometimes. At times I want to go grind ladder because I have to get that top 100 finish, but then work calls so that goes first. It's been a little difficult to balance everything, especially with how serious I want to get into Hearthstone. But overall I think I'm doing it fairly well.

You broke out in the North American scene, which hasn't really been performing amazing for a while now. However, now there are a lot more tournaments and the scene is really rising again.

I definitely think America is a very strong region. It just doesn't get enough credit because we don't have the talent pool that other regions have. What I'm saying is that the talent we have is on par with every other region, that's for sure. The issue is that we don't have much talent as the other regions. We might have these twenty talented players who are all on the same level and can perform very well, but for those twenty people Europe might have thirty or forty. That just makes it looks like we're a weaker region when in reality it's not that we're a weaker region, but we just don't have as many players.

Wouldn't you say a region's strength is represented both in quality and quantity?

There is an extend to that, but I think a lot of people don't evaluate the amount of players. They just say all American players are worse just because of one example. As I said I don't think that's fair, because we have players who are definitely as strong, just not as many.

Will the rising tournament scene enlarge the pool of players on that level?

I think another reason why people dismiss the Americas region is because most of the Majors that have ever happened have been hosted on European territory. Whenever you are given accessibility to something in your area it strives for you to do better, strives for you to want to do better. So since the European region has always had Majors, they've always had players who wanted to get better whereas the Americas have not had that exposure. If the Americas started off as Europe and had the same amount of Majors I think it would be right on par with the European scene and maybe even be stronger. It's just hard when the American players have to fly over in order to compete in what is considered one of the grand-scale tournaments in the scene.

I think NA will potentially be stronger than EU

There are players who now are unknown, but with these Majors have a chance to really break out. A player tagged Bell, for example, has won Pokémon Worlds for the Junior League, but has played Hearthstone casually mostly, but may be transitioning over to Hearthstone now. He went to the PAX East Major and got 9th-12th with me. Just seeing his name amongst the top twelve with at such a stacked event is just incredible.

I think the NA region will grow wider over time, but that it just didn't have as strong of a foundation as the European region. Now that we are receiving those Majors and people are incentivized to go out and play the game, I think NA will potentially be stronger than EU.

How will you approach the increase in American Majors? You already played at PAX East in Boston, a few weeks ago.

I would have gone to Austin for PAX South too, but it conflicted with work and the Winter Championships. Another big thing for me is that I don't have a team* to support me for this event. Everything I do is out of my own pocket. So traveling to PAX East, Boston, was all self-funded. It hurts a little bit, but I felt like I needed follow-up after HCT. I didn't want to win the HCT and then disappear, so it was an investment for my future.

I'm excited to attend more events, for example DreamHack Austin. Whether it will be self-funded or through a sponsorship or team. I also hope to qualify for the Spring Championships. Other than that all I see is a bright future for myself, I don't see myself stepping down from anything.

Oh certainly! I've recently been streaming more, and I'll try to set up a streaming schedule to try entice people to watch. It's just been hard with my job and work, but until recently I also didn't really have a reason to. It would be just for my own personal fun or for my friends. Now, though, I really want to do it more because of the name I'm trying to establish.

I still have long ways to go,
I want to compete more.

At least many established pro players have already expressed their fondness of you, stating that you were one of the strongest players in the Americas' Playoffs.

That's something I've always wanted to hear. Obviously you want to hear from your fellow players that you're validated within the community. To hear specific players or a majority of players say "Hey, this guy is a threat, he sees the proper lines of play" really resonates with me. I want to be respected in the community; that's what every player wants. Whenever you enter a community you want to be respected and taken seriously. I feel I've accomplished that goal, but I still have long ways to go, I want to compete more.

I have only competed in one Major and one HCT Playoffs event. I won the Playoffs and got top sixteen at one of the most stacked Majors, so I think those two are really good results. I also held my own against some great players here at the Winter Championships. So competing more and doing well in other events is something I want to do to keep reassuring my strength.

To end the interview I'm going to ask you a tough one: Will we see you at the World Championships?

Oh yes, of course. That is a promise!

*A short while after the interview it was announced that DrJikininki joined Denial Esports, for which he now plays and streams Hearthstone.