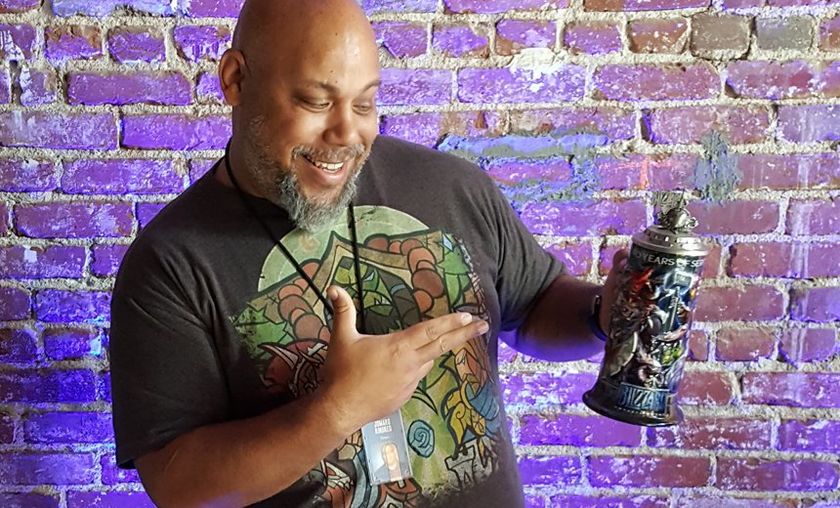 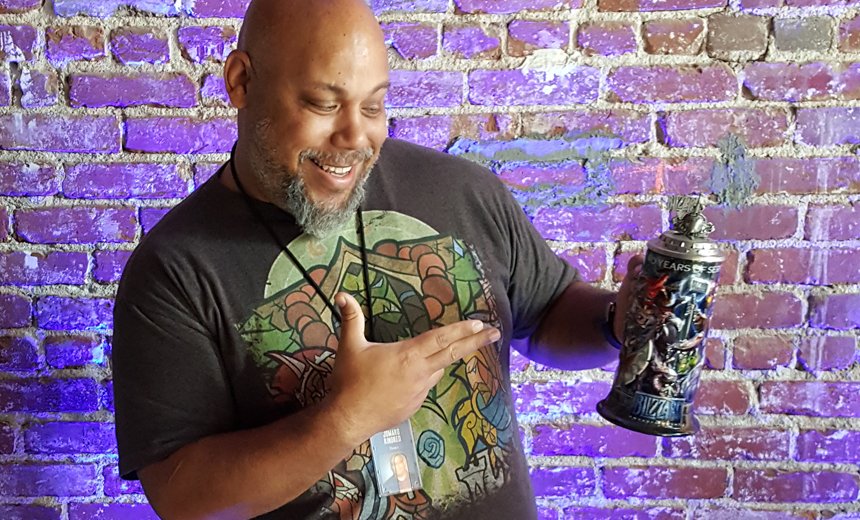 A long, long time ago, when Team 5 was formed, it consisted of just a handful of people. Over the years, however, the team has grown massively, much like the popularity of Hearthstone itself. As of September 2016 the group of people working on the game consisted of over seventy people, doubling every year according to Game Director Ben Brode. From Game Designers to Software Engineers, and from the Balance Team to 3D Modellers, Team 5 consists of some of the most passionate, talented and creative minds that can be found.

One of those minds is Jomaro Kindred, Senior Concept Artist, on the team for almost three years. Together with Game Designer Matt Place he took the stage during BlizzCon 2016 to shed light on the designing process behind the Mean Streets of Gadgetzan expansion, which then was just announced. More recently he received a lot of attention during the HCT Winter Championships. Whilst at the Bahamas to enjoy the Hearthstone community, Jomaro - seemingly being never more than a few meters away from his drawing equipment - had the fans lined up for him as he took requests for sketches from anyone who wanted an original drawing. And a lot of requests there were, with one of the best examples being Disguised Toast's bread-headed SI:7 Agent.

In between drawing, sunbathing and enjoying the Winter Championships, Jomaro found time to have a talk with Matthieist about the design of Hearthstone, and about what some of his favorite designs are.

How are you doing man?

Before you joined Blizzard Entertainment, what did you do?

I was in the game industry still. I worked at a company in Dallas called Nerve Software. We did a lot of work for Treyarch and Gearbox. We were subcontracted and worked on their games.

I think many people don't precisely know what a Concept Artist does. How would you describe it?

As a Concept Artist we kind of touch everything on Hearthstone projects. We do a lot of pre-visual work, like coming up with characters such as Kazakus and [card]Don Han'Cho[/card], figuring things out early on. But we also touch things such as the game boards and the card backs. We pretty much work on and paint everything you see in Hearthstone. Everything in the game is painted and illustrated, so that is what you see. Most other concept artists just do the pre-visual work, but we have the joy of seeing our art to be actually in the game.

So you draw the first images of the cards we see?

We do. As we get further away from the original TCG and we explore more Hearthstone-related things, we're in a position where we can flesh out new ideas and create new characters, establish an environment. That's really appealing to me.

You did a lot of work on Mean Streets of Gadgetzan, and in your BlizzCon talk you spoke about how you designed Kazakus. Are those concepts a team effort, or is most of it a solo-project?

I think ultimately it's all a team effort, but usually those things start as a small group. I typically work back and forth with a Game Designer, as they let me know their idea. The Art Director, Ben Thompson, is involved as well, directing those things. And yeah, we just kind of start from there and think: "What works for the set? What will work feel the best for Hearthstone? Is it whimsical, is it fun? Is it unique?"

Like Kazakus, for example. We've seen a lot of trolls, so I was thinking of how to make this troll different. We started with the silhouette. His tusks have 90 degrees angles in them, and I don't think there's any other troll that has that. So we do things like that, and that's how it begins.

Sometimes we'll go overboard with the visuals of an effect, even though what the card is doing is not very powerful

In your opinion, what's the most bad-ass card you've ever drawn?

Hm, [card]Justicar Trueheart[/card] was nice... It's still Kazakus, though. That was the first time where we were able to concept those characters. When that card came up, I jumped at it. As you know we do outsource a lot of our cards, because there's just too many. The few of us on the art team can't do it all. But we have the luxury of picking and choosing which card we want to do sometimes, so Kazakus was the one for me. To see it from birth to in-game was something I couldn't pass up.

When designing a card, is it of any influence what the card's effect will be, if you know it?

Oh absolutely. In fact, it can get kind of crazy. Sometimes we'll go overboard with the visuals of an effect, even though what the card is doing is not very powerful, so then we have to pull it back. So the effect is definitely important. All of us typically have a hand in creating those effects. We help each other out there. That aspect is very enjoyable too, because it adds so much flavor.

Can you give an example?

There's so many... Well let's look at [card]Volcano[/card]. That's just amazing! It just speaks to me. When I saw it I felt like I was watching a cinematic or cartoon. Hadidjah Chamberlin is the artist who worked on that pretty much exclusively, and she did a great job. That's probably my favorite; I like powerful effects that encompass the whole board. They just take advantage of all available space.

You also said that as Concept Artist you draw game boards.

The Goblins versus Gnomes game board was my first, I think. I did it together with Ben Thompson. It was a lot of fun too. All the boards are fun. While it is enjoyable to paint the boards, it's also awesome to see the clickables come in. Other members of our team do those. John Zwicker is one of them. He tanks those clickables and he just takes them to a next level. There's stuff that I don't even know yet, so I explore them as well. I told John not to spoil anything, because I want to find them myself.

Do you think of the clickables when you design the board?

We do, that's something that definitely goes into consideration. Though we do think of them early on, some will be put in that we don't even know of. It's exciting.

Hearthstone has a very unique feeling to it, very different from World of Warcraft. To you, what's the core of the 'Hearthstone-ification' of WoW?

Luckily we are kind of a derivative of Warcraft. So that's already established on some level. It's actually an already stylized look. But we take that style, and push it a little further as far as whimsy, fun and charming goes. That means making things larger, taking sharp shapes and dulling them... Almost as if you can make a toy out of it. That's the idea when we approach the art with.

Obviously you love drawing the Hearthstone and WoW art, but what other games do you love the art of, and would you like to draw?

Overwatch, for sure. Though I don't think the Overwatch style and Hearthstone style would get along greatly. I'm pretty much exclusively invested in Blizzard games, as those are my favorites. While some styles are similar, I'm not sure if they overlap easily, but we do some things. You have seen the Overwatch card back in Hearthstone, for example. We've taken that and brought it through some material changes, changing the shapes slightly to make it feel 'Hearthstone'. The Diablo card back recently is a good example too. So sometimes we do incorporate other things into our style, but we don't do that a lot.

Sometimes I actually jump into WoW and fly around on my mount, looking for inspiration.

Talking about those card backs, how does the theme and design get determined?

Well that depends. Some card backs are tied to a release such as an expansion. Other ones are just things that we feel express Hearthstone. For example, we might do a Troll card back. It's not really associated with anything, but it's just something we felt fit the visual aesthetic of the game. Sometimes I actually jump into WoW and fly around on my mount, looking for inspiration. I mean, a dungeon can inspire a card back. Charlene Le Scanff, another Concept Artist, I think she did a Zul'Farrak-inspired card back. I'm not sure that's what we named it, because we always give them our own names before they're official. But yeah she went into the dungeon and got inspiration from it.

The card backs come from a lot of different places. There's also events, of course. There's an amazing card back for this event, that Jerry Mascho did. It's super powerful, I love his style. He's such a talented artist. 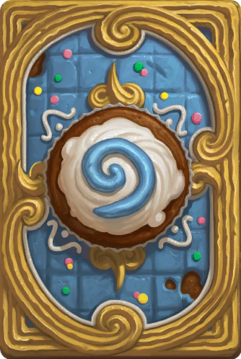 What would be your favorite card back?

Did you make it?

You got me, shucks! I absolutely did. But it's fun, it's exciting. I think I made the Cupcake card back for the Hearthstone 1-year anniversary.

To wrap it up I've got a bonus question for you. Who is the best Overwatch player in Team 5's art team?

Well that's interesting. One of artists for golden cards and effects, Nick, is really good. But I think I'm a close second. Most of us are pretty good overall, though. We play Overwatch during lunch hours and it's a lot of fun. We have good days and bad days.

A follow-up question would be: Who's the worst?

Oooh don't do that, I can't even go there haha. I will not throw anyone under the bus.

Those questions actually came from Matt Place and Mike Donais, whom I asked to pitch a question for this interview.

Hahaha that's great, fantastic! Yeah they get to hear us play every day and we get really excited.

Good to hear you're having fun, and thanks for doing the interview!

It's my pleasure man, thank you very much.