The winter leaves of Standard: Which cards should stay after the rotation

In the past couple of weeks there have been community uproars slighty above the normal about the current state of Hearthstone, only last year it was all about Paladin and not Shaman.

This has sparked a lot of talk about whether nerfs are required to address the current meta and people have been posting the usual balance passes, with all of this happening much earlier than usual, after a big expansion.

When it comes to nerfs however, it has been made quite clear that they won’t be arriving for a while, with Ben Brode's post announcing them at the at the end of the month, after the winter playoffs. Even for my standard, this is too soon to start talking about which cards to nerf. So instead I wanted to go down the other route and talk about the evergreen. Not to look at the problems with it, something I have already done enough to sound like a broken record, but rather address the cards that actually have purpose as permanent members of the standard rotation. The winter leaves in Standard, that can stay evergreen for years without it being a problem. 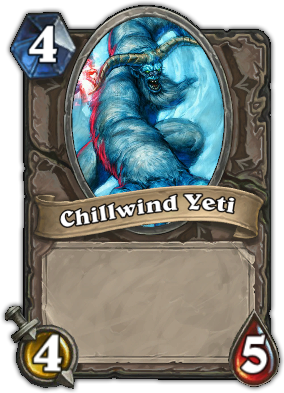 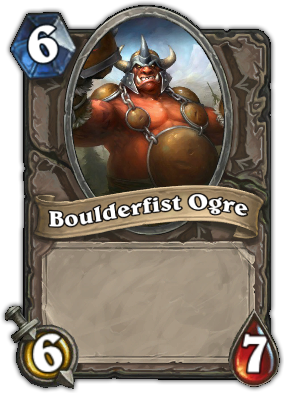 I doubt anyone really has much of a problem with the classic minions but their importance really cannot be understated.

The vanilla minions are some of the most useful in the game of Hearthstone, purely from a design perspective. These minions both serve as introducing new players to the core mechanics of the game with attack and health and also set the expectation for what stats at least should be expected to be on certain manaslots. Though most of these have long since succumbed to powercreep it is still useful to push a baseline that new players can compare to when they start getting new cards. The same baselines also help in identifying “junk cards” like Thrallmar Farseer or Priestess of Elune.

While these minions don’t see play in the highest tier (and they shouldn’t) it is also good that some of them are somewhat close, with Chillwind Yeti and Boulderfist Ogre being eternal staples in every pro players free-to-play runs, usually for a quite a while. This keeps Hearthstone a game where even the newest player can enter and have a shot against an experienced player with expert cards. Something that drives much of the appeal of Hearthstone.

Their simplicity is also a source of potential. Muraganda Petroglyphs in Magic is an example of support that only applies to minions with no effect. In Yu-Gi-Oh it is a long-standing mechanic of its own to have support for effect-less minions. “Normal monsters” covers a ton of support within that cardgame, as well as some of its most iconic minions being normal monsters themselves. This is something Hearthstone has not yet done, but certainly could do in the future. 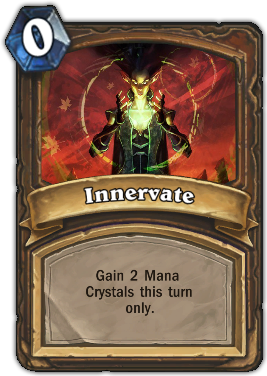 Hearthstone has nine classes. This is quite a lot, something that is brought up from time to time, especially compared to Magic: The Gathering which only has six different colors, including neutrals. Each class receives support simultaneously and are expected to fight on at least somewhat the same level of power. At the same time, classes must be different from each other, they can’t just all play the same game of Hearthstone. That is a tall order and the best way of achieving this is to define class identity, through the cards that are always going to be available for the class.

Innervate and Wild Growth are perfect examples of class defining cards that set the theme of Druid as a whole. It perfectly defines what is supposed to set Druid apart from other classes, their dynamic mana flow. Other examples are Northshire cleric that cements the whole healing theme for Priest.

On frequent occasion I see people demand nerfs to these kind of cards. Whenever a powerful druid deck pops up, it is not uncommon to see requests to nerf Innervate. But in the case of class defining cards it is better for the consistency of the game to focus on keeping everything else balanced around it. This is especially true for something as powerful as Innervate, which certainly restricts how powerful the stuff druids can have access to is. Their class cards in the late-game are typically not that much stronger than the neutral late game minions and druids could certainly never get access to something as powerful as Tirion.

There is of course such a thing as too much of the good stuff. Too much basic identity leaves very little to expand on. Before standard was introduced, druid was also a good example of this. Their standard set held core class mechanic of ramping, solid midgame stuff like Keeper of the Grove, endgame cards like Ancient of Lore and the general win condition of the Force of Nature + Savage Roar combo. This core set was just way too versatile to be good for the game.

But today things are better and the biggest problems related to class identity in the evergreen set relate more to the classes that got none of it. This tends to cause repeating issues as too much built up identity gets cycled out. Paladins are currently suffering because Blizzard once again failed to provide adequate early game, which hurts classes with lackluster classic sets the most. This is the same issue we saw in the Naxxramas era before Goblin vs Gnomes came out. Priests are looking at the same problems as most of their early dragon engine is up for rotation.

A very important distinction to be made about class identity, is that purely class defining cards are NEVER reactionary. Removal of cards like Execute and Hex as such would not fall under this category.

This is because the reach of reactionary effects goes beyond just the class of its origin. Yes they can define how the class plays, but they also largely define which cards you can play into them. For this reason, most reactionary cards are game defining. And such cards cannot be treated with the same attitude of consistency that may apply to class defining cards. These cards, when overpowered, can leave entire categories of other cards useless. This is usually high cost minions, and could also be seen with tempo warrior before execute was nerfed to 2 mana back in September. A needed change.

What about the power cards?

This leaves the question about classic cards that often make a huge impact on their own and are a part of the constructed meta. Typically classic minions that still to this day can decide games on their own. Is it okay for the classic set to hold minions like these?

The answer is that it varies. There should be some cards in the classic set that see play in constructed, after all classic always consists of at least 1/3 of all cards in standard. There are simply too few cards being printed for classic cards to not see use.

There is nothing wrong with this, indeed it is to be expected that low budget players can also have access to powerful cards that stay in the game. However, whether a card has reached a level where it is an outright problem depends on a couple of factors. The extent to which the minion is used, as well as how persistently it has been used over the year is a big factor in whether a minion is problematic. A good example of a problematical minion is Azure drake, a card so versatile that it has seen consistent use through all three years of Hearthstone. It's a card certain to be on every single balance pass presented throughout February (including my own!). But for the theme of the article lets look at a card I think a lot of people get wrong. 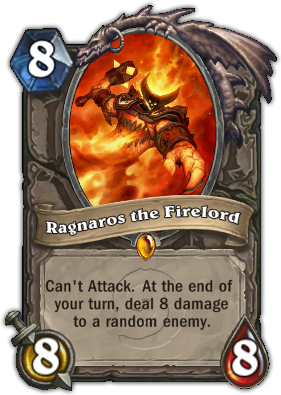 Ragnaros the Firelord is a card that keeps popping up in these early balance passes for 2017 standard rotation. Personally I am not really sure why. Most of the time people highlight the RNG, but most RNG cards nerfed in the past saw much higher presence in the meta than Ragnaros have.

It is true that this type of RNG can be infuriating but that is a feature of all RNG in Hearthstone and if the design philosophy presented in the design insights is anything to go by, this is unlikely to change. But looking beyond his RNG, there is very little to suggest that Ragnaros should need to be rotated out this April. He has seen use throughout the years, but the persistence of his use is not even close to problematic levels. Among classic neutral cards in 2017 he is not even top 5 in highest use.

From historic data we also know that the usage of Ragnaros tones down during times of heavy token strategies. He sees significantly less use every time Hunter or Zoolock is on top of the meta, because his power is so insignificant against masses of minions. In the same vein his use goes up against Freeze mage due to the fact that freeze doesn’t really work on Ragnaros (very thematic really). And this is good!

His power is completely static. He respects the health and powers of any minion hit. More than 8 health? It survives. Minion had deathrattle? It triggers. Divine Shield? No damage then. This is the attribute that makes it so hard for him to be a long-term problem because it leaves tons of design options available, should he ever grow in use. Effects such as the adventure-exclusive 1 damage only from league of explorers would render his effect moot. Big Game hunter is still present in the game and is still a very efficient response.

A thing I think people forget is how few 8 drops there are currently in Hearthstone. There are only 15 8-mana minions in standard currently of which 7 are class cards. It is one of the least contested mana costs and one of the most junk-riddled. You see giant sandworm that might as well be a 8 mana 8/8 with no effect, Fossilized Devilsaur which IS an 8 mana 8/8 with no effect and of course the the boogeymonster that somehow manages to outdo them both as an 8 mana 6/7.

Most of the time when Blizzard get serious about late game minions, they manage to compete nicely with Ragnaros. Indeed he sees competition from quite a few current cards. From Renomages preferring Antonidas or Medivh to murloc paladins always sticking to their trusted class legend Tirion. Ragnaros is by no means an autopick, even for decks that expect to go well beyond turn 8. Even in tempo decks like Tempo mage you see builds, with or without Ragnaros.

Always powerful, but never mandatory and yet simple in design. These are the charismatics of a great card, one that can safely stay in the game to set the bar for new cards to come. I don’t know why people keep suggesting to nerf him. The only time I would ever nerf Ragnaros is when I am playing Heroes of the Storm.

Stefan “Sumadin” Suadicani
Editorial for Gosugamers Hearthstone. Been playing Yu-Gi-Oh for nearly a decade and have played Blizzard games for even longer than that.
Share Tweet
13 people reacted to this post