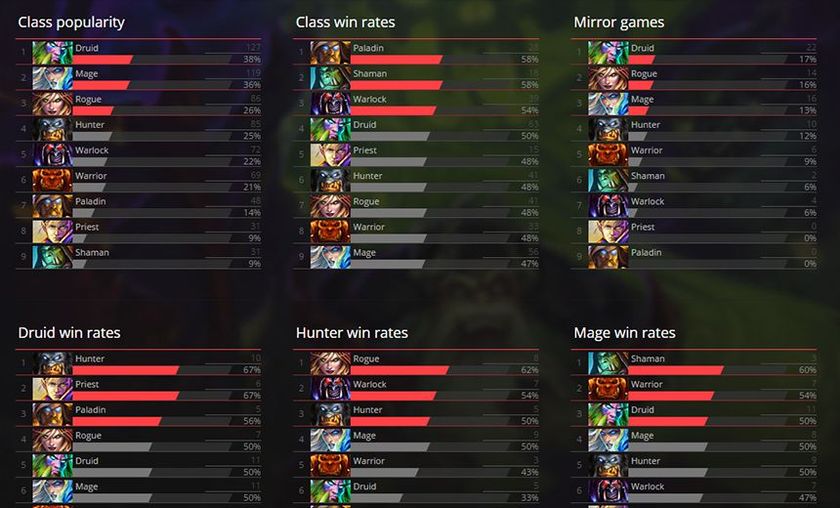 KPL in numbers: An in-depth analysis of Hearthstone's first league

The Kinguin PRO League is near its playoffs. This weekend, what started two and a half months ago will come to an end. The six best players of the league are ready and so is the $15,000 prize pool.

But as weird as it might sound, the playoffs are not what makes the KPL special. The league was the first attempt to establish a long-running Hearthstone tournament, akin to the competition in other games like League of Legends. Players were given one opponent each week, with plenty of time to prepare for that particular match-up.

This brought a dynamic different from any other Hearthstone tournament. Instead of preparing a solid line-up that can be strong in five or six consecutive matches, the twenty contenders could build and play a bit more differently. They didn’t have to keep their decks or even their classes. Each week was different.

In April, Blackrock Mountain also started to roll out which brought even more changes to the league. It negatively affected players who were previously invincible, a phenomenon which we will explore further into the article.

The classes in numbers

Nobody should be surprised looking at the left column in the image above. Druid, Mage and Rogue have proven to be one of the most consistent classes in the game right now and players regularly brought them to KPL matches. Even though in conquest having a high popularity doesn’t necessarily mean a good thing – after all, playing Druid three times in a series means the deck is not doing too good – the mere fact that every player who reached the playoffs prepared Druid for multiple series during the group stage speaks volumes.

Talking about Druid, many experts have labeled the class bad in conquest, yet we see it’s being brought all the time. It’s win-rates are also more than decent and even though in KPL it sits on exactly 50%, it’s actually the second most winning class since BRM’s release, at 53%.

The KPL format creates a class dynamic different from any other tournament.

What is surprising are the win-rates of Paladin and Shaman, but that’s until you remember what we established in the opening paragraphs – the KPL is a tournament like no other; it’s all about preparing hard counters to players or classes. Let’s take Thrall, for example. Shaman’s 58% lay largely on the booming popularity of Druid in the league, against which the class has won 80% of the times. It was also used to counter known Warrior players. An example of this is Firebat’s Paladin/Shaman/Handlock line-up against Sjow, which reverse-swept the Warrior of the Swede.

The specific counter-nature of Paladin and Shaman is further exemplified in their low pick rates, at 14% and 9%, respectively. And that’s easily explainable – with the metagame flooded with Oil Rogues and Mages, Paladins are bound to struggle. The same logic applies to Shamans, who are always in danger of straight up dying to Hunters, which is not at all coincidentally the fourth most played class in KPL.

What's up with Jaina?

A large part of the problem is Mage’s predictability, a weakness that gets magnified in the KPL format. Even though on paper there are a plethora of Mage builds, only two are actively used in competitive environment – Mech and Freeze. Thus, knowing the player you’re facing next week, one can easily predict not only if Mage is coming, but also what build exactly will be played.

Mage's predictability is a major problem for the class.

Lifecoach, for example, never ever parts with his Mech Mage and this knowledge has been used to punish him in the past, particularly by Dog in week five of the league. Knowing Lifecoach’s line-up, Dog brought a Priest and Freeze Mage to 3-0 Lifecoach’s mech mage.

Similar conclusions can be done for Freeze Mage, a build also tightly associated with players like Firebat, who prefer it most of the times these days. Additionally, there are a few other problems with this build in particular. First, there’s the high skill cap of the deck, meaning a slight mistake might end up with a defeat even against favorable match-ups. Secondly, it’s about Freeze Mage’s role in Conquest line-ups. Freeze Mage is not a well-rounded build and is all about countering one specific deck type/style in the opponent’s line-up. It will almost always lose to Druids and Warriors but it will shine against Oil Rogue and Mech Mage. As the losing deck is not eliminated, players will just queue Freeze Mage until they encounter the deck they beat. Swallowing a few losses along the way is a small prize to pay for the Freeze Mage player if it can eliminate a dangerous threat. 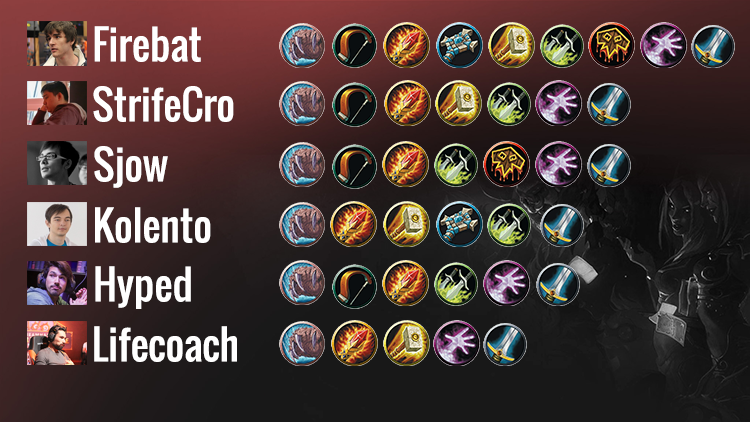 Looking at the strategies of the best players in the league offers additional insight. There are no two players who are similar in their line-up approach. Let’s look at the graphics above for a second.

Just by examining number of classes used, there are vast discrepancies. The second best player in Alliance group, Firebat, used every single one of the nine classes during the group stage marathon, while the #1 player across the pond – Lifecoach – played as few as five. Here, one could make the hasty conclusion that one player is predictable, and the other isn’t, but that’s not really the case. Let’s start from the bottom and I’ll show you just exactly what that means.

The micro-change genius of Lifecoach

Out of the six finalists, Lifecoach is by far the player with the least flexible line-up. On paper, this is a dangerous flaw: if your opponents know what you’re bringing every time, they can exploit this to your detriment. But neither in KPL, nor in other tournaments has that been a problem for the German. In fact, his holy trinity of Druid/Mech Mage/Handlock made him the most dominant player in the February-March period, with a total win-rate of 86.4%. In the few instances he diversified his line-up, he’d bring a Hunter or – very rarely – a slow Paladin, but other than that his line-up remained unchanged.

We could argue that staying true to a line-up you’re confident with matters more than trying to innovate as you end up playing decks you can’t pilot to perfection. That’s true, but that’s not all there is. Lifecoach does make changes to its line-up, only not on macro but on micro level. What do I mean by that?

The best way to describe it is to look at his Handlock. 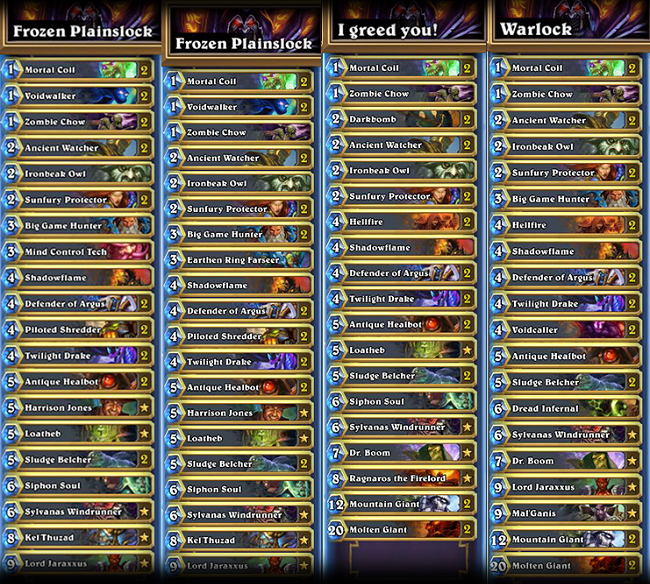 In six of the seven games Lifecoach brought Warlock to, it’s been a slow build but no two builds were the same. While Nihilum’s finest keeps his Mech Mage and Druid, using them as the stable core of his line-up, he does a lot of tinkering with his Handlock. One week, there would be Giants, another week there would be only Demons, and a third week there would be a weird mix of both. Cards like [card]Ragnaros the Firelord[/card], [card]Lord Jaraxxus[/card] and [card]Mal'Ganis[/card] would come and go, making the high end of his curve unpredictable. And that’s incredibly important – playing around [card]Molten Giant[/card]s is great when you know they are coming, but it’s terrible when the win condition is completely different. Against traditional Handlock, not attacking means slow Giants. Against a non-Giants Handlock, it means more time for him to do his thing.

But Lifecoach’s micro changes do not just appear at the end of the curve, he will in fact do them all over the decklist. You would see small tech changes like an extra [card]Earthen Ring Farseer[/card], or a [card]Mind Control Tech[/card], or a [card]Zombie Chow[/card]. This might not seem to impactful but it is: If you don’t know how much healing there is in a Handlock, you don’t know his full comeback potential. Just the same, a surprising [card]Mind Control Tech[/card] could be a game-winning tempo swing.

This is the magnificence of Lifecoach – he psyches you out on a very micro level and many times it’d be scarier than straight up switching classes.

Not your average consistency: Firebat and Kolento

At first sight, Firebat is at the diametrical opposite of Lifecoach. He played all nine classes and changed line-ups almost every week. The big picture, however, tells a different story. Despite Firebat's class slaloming, he's stayed true to one playstyle - board control.

Firebat kept bringing a predominantly board control line-up in all weeks of group stage play. He would favor reactive decks more than anything, thus keeping consistency in his otherwise diverse line-up. That allowed him to establish a comfortable mindset for his KPL matches, while still changing up classes to keep the surprise factor.

Firebat's class diversity, however, is not a random one. In fact two of the classes - Shaman and Priest - he played only once. If you're thinking "hard countering a player" you're correct. The Shaman was subbed in against Sjow, a guy known for favoring Control Warrior, while the Priest was brought against Savjz, as the fin has shown his love for Druid and aggressive builds like Eboladin in the past rounds.

One other player who didn't abide by what you'd call standard formats is Kolento. The Ukrainian is the only player in the playoffs who consistently played Priest, and while this didn't work out well in the start, sticking to it and playing it over and over again paid off.

Kolento's favoritism of Priest makes sense. The deck performs great against the #1 popular class, Druid, and also shuts down decks like Zoo, which were expected to be on the rise with the release of [card]Imp Gang Boss[/card]. In fact, Kolento was so much gunning for Druid that he'd often bring a Mech Mage as well, just to make sure he has two favored matches against Malfurion.

On top of his Priest, Kolento would usually have two proactive decks. One would be the aforementioned Mech Mage and the other would usually be his own Druid. He would rarely stray away from that line-up composition, the only two exceptions being his triple board control Priest/Oil Rogue/Handlock line-up against Hyped and another similar Priest/Oil Rogue/Warrior line-up against Orange.

We examined two players who’ve been rather consistent metagame- and playstyle-wise but not all of the top six players are like that.

One particularly interesting player in that regard is Hyped. Between weeks, Hyped would follow Lifecoach’s principle but do it on a bigger scale, most notably in his Mage builds. Hyped played Mage in each of his nine matches, but during his first six series, he constantly alternated between Freeze and Mech, keeping his opponents in the dark. In his last matches, he sticked to Mech Mage alone but the amount of archetype deck-swapping was very likely affecting his opponents.

Other players like Sjow and StrifeCro were also ever-changing ones. Sjow left his Warrior on the bench for four weeks after it was hard-countered by Firebat and only brought it back with the rise of Patron Warrior. Instead, he'd also switch between Mech and Freeze a lot and he'd even play Shaman twice.

The same goes for StrifeCro. The Cloud 9 player kept his Handlock as a recurring part of his line-up but outside that he changed decks a lot. Many of his opponents probably expected to see Druid a lot, but StrifeCro only played it in week 1 and then again whole five weeks later. He kept Paladin and Handlock for three weeks in a row between Weeks 2 and 4, only to switch to Face Hunter/Mech Mage/Handlock and then to the biggest curveball of all - the Grinder Mage/Mill Rogue/OTK Warrior trio that almost beat Firebat. Finally, there was the Druid/Zoo/Patron Warrior composition in the final week to secure the first place in Alliance division, a composition containing two builds StrifeCro never played before in KPL.

So as you see, we have quite the bunch competing for the KPL championship. All there's to see now is who will run away with it.