Zalae: "I want to see more and bigger changes to Hearthstone."

After an impressive showing at the ESL Legendary Series Season one finals in Burbank, California, the former Magic: The Gathering pro was picked up by Team Archon on March 9th. Roughly one month later, on April 3rd, he won his first major Hearthstone tournament as he came out on top of the Blackrock Mountain Launch Invitational. Right now, the American is sitting comfortably in the Top10 of our rankings and - probably more importantly - on the 9th rank of the North American Hearthstone World Championship Standings.

Hey Zalae! Nice to meet you and thank you very much for the opportunity for this! My first question is one you’ve probably answered a decent amount of times. It’s quite known that you have a background in Magic: The Gathering and I think in chess, too? How did you get into those games?

Well, I come from a family of gamers so I started learning how to play chess when I was four and Magic probably before I was ten. My first packs were Revised I think. I've loved competitive gaming my whole life. For me it was Chess then World of Warcraft then Magic professionally and now Hearthstone.

That's awesome! And later you transitioned into Magic Online, right?

Yeah, Magic Online was when I first started actually earning through gaming, which was an awesome moment for me. As a younger person you get asked what you want to be when you grow up and I never really liked the options, I just wanted to play games.

"I never really liked the options, I just wanted to play games."

So you just started playing a ton and realized you can actually earn money?

Yeah, after I quit World of Warcraft I was sort of bored. So one day I thought to myself, I've played Magic casually forever, I'm pretty good at games when I try, what will happen if I apply myself at this game for a while? How good can I get? And probably 2 months later some random guy messaged me asking questions. Apparently he found me because I had the #1 winrate on Magic Online according to some website. I was making a little money at the time but that conversation made me think about investing more time into it.

And I think you've earned the title of Magic Online Player of the Year at some point? What were the criteria for that?

That title came from winning a tournament with roughly 200 players who had been doing the most winning that year. It's a tournament at the end of the year. They invite the top x people on points and I won it which qualified me for the Magic Online Championship which was a LAN event and it also qualified me for my first Pro Tour. I bombed the LAN but finished a very respectable 24th at the Pro Tour out of maybe 400 players.

Later, you made the transition to Hearthstone. Why that? There are a number of people who make quite some money off of Magic, so why don’t stick to that?

Well I had been playing Hearthstone casually since beta and it really appealed to me, but what changed is Magic Online came out with a new client that was really horrible. So that's what convinced me to make the switch from Magic to Hearthstone. They shot themselves in the foot. Also, now that I'm playing Hearthstone I have to say I just like the game better.

Because of the mana system? That's probably one of the biggest differences.

That's true, in Hearthstone you really have to think about every single card a lot. But let’s get a bit further: You made your first splash in the ESL Legendary Series with your what I call “Combolock”. Personally I loved the deck and still play it on ladder. Now with cards like [card]Emperor Thaurissan[/card] out, do you have any advice on how you would build the deck these days? Or do you consider it bad right now?

I haven't touched it lately so I'm not sure exactly how good it is. There are only so many hours in a day and other ideas have seemed more appealing to me. A deck like that gets a lot of value from being a surprise so now that I'm known for it almost anyone else might have better chances with the deck than I do. It was a lot of fun and Tarzan would be a great addition, maybe I'll get back to it.

Haha, calling him Tarzan is great. On to Team Archon: You were picked up fairly quickly after the ESL Legendary Series finals. How did that go? Did Amaz just shoot you a message and you were like “Yup, I’m in!” or were you tested further or something?

They had already been scouting me and liked what they saw prior to the LAN. After the LAN I got some offers and Archon was my first choice. There was no further player testing, the player testing was the tournaments I had already competed in.

Got it. These days, what’s your role in the team? Firebat once said jokingly on stream that he’s just there to win tournaments and that's basically it. Is that what you do as well?

Well, winning tournaments is my highest priority. I also like to stream from Mondays to Fridays tournaments permitting. I just won my WCA group last night which is particularly cool since Archon has now swept the first 3 groups, we're all hoping Purpledrank will win tonight for a perfect Archon 4-0.

Now that we’re talking teams: There are some big teams out there apart from Archon. You probably think that Archon is the best, don’t you? Who do you think are second and third and why? If you want to fire any shots, this is the place for it.

I certainly think Archon is #1. That's a big part of why I wanted to join Archon. It feels like we've just been winning everything lately. There are several other strong teams out there but I'm not sure which are #2 or #3. We have a bit of a rivalry with TempoStorm so beating their players is particularly satisfying.

"It feels like we've just been winning everything lately."

No idea if you know, but you’ve placed fairly high on our “Top10 players to watch this year”-list. What are your personal goals and your goals with the team throughout the next months?

Yeah, I enjoyed seeing my name on that list. I don't like to set specific goals because it's easy to set them too low or too high. Instead I just try to make good decisions as consistently as possible and see where that takes me. 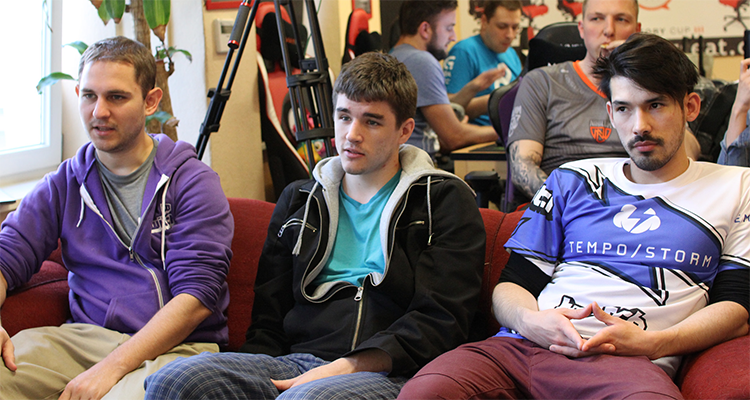 Do you think there's someone missing on that list? Pro players often seem to have really different opinions on players' strengths compared to the community.

The best way to get a feel for how strong a player is is to talk to them, and I spend most of my time talking to my teammates, so I don't have a good read on how strong the rest of the competition is beyond that we seem to beat them a lot.

Pretty confident, I like it. Let’s move on to Blackrock Mountain. We’re three wings in right now, which cards did impress you the most thus far? And by which ones are you most disappointed?

[card]Grim Patron[/card] is better than I expected. That deck is a lot of fun and I'm so happy it exists. From my perspective it has been a long time since a fun new deck came out in Hearthstone. Patron is one and I'm hoping for a lot more. I'm not sure I'm disappointed by anything yet, but I certainly will be if there isn't at least one and preferably several good dragon decks in a couple weeks.

Yeah, the first dragon attempts haven't been too successful. But in general you seem to be quite happy with BRM. Many people think that BRM is more of the direction that Hearthstone should take compared to GvG. Would you agree?

Well, I want to see more and bigger changes to Hearthstone. The game has been out for like 18 months and a lot of the decks that are at the top now were also at the top the whole way through. I want to see some of the old cards that have been keeping things so static go away to make room for a new and different meta. In this respect I think Magic does a better job than Hearthstone. I'd like seasons to be longer than a month and coincide with card releases. A month feels too short. Resetting the ladder when new cards come out makes a lot of sense. Lately we've been having huge changes in the last couple days of the month, which I think is really bad. For people competing for Top100 ladder slots to qualify for the Blizzcon Hearthstone World Championships it's like the first 27 days of ladder hardly matter at all, then a nerf comes along or new cards come out and you have three days to try to figure it out. The rest of the month should matter more.

"I want to see more and bigger changes to Hearthstone."

So you would like the dominating cards to be nerfed every once in a while to get the meta moving again?

I want cards to rotate out like they do in Magic. Maybe some or all of the free cards like [card]Innervate[/card] and [card]Preparation[/card]. It's not that I don't like the cards, it's just that they're so powerful and they're keeping things too similar for too long. So many decks and matchups feel very similar to how they did 12 months ago. I want some more variety to keep things interesting.

Okay, interesting opinion! To wrap things up, I've got some quickfire-questions and we can get right into it. So, what’s your favourite, aggro or control?

League of Legends, Dota2 or Heroes of the Storm?

Heroes of the Storm because I love Blizzard.

Finally, tell us a secret about Zalae the Hearthstone community isn’t aware of.

I was kinda fat a couple years ago. Lost 35 pounds.

Perfect, there you go, reddit. Thank you very much for your time! What’s the next time we see you in a tournament? And of course, if you want to do some shout-outs, go for it.

Well, I guess I have an ESL LAN coming up for WCA at the beginning of June. Shout-out to my teammates, Archon #1, check out my stream twitch.tv/zalaehs and follow me on twitter @archonzalae.