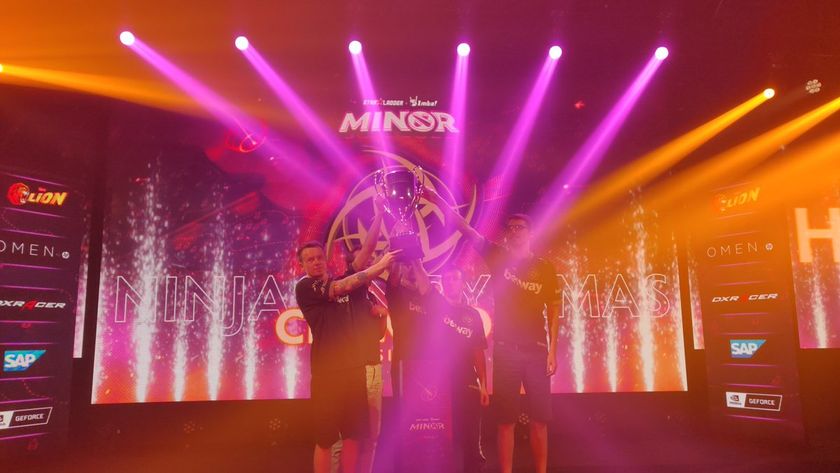 Despite playing in the middle of the sweltering summer heat with no air conditioners in the play booths and Peter "ppd" Dager playing with a fever, Ninjas in Pyjamas  were able to overcome their circumstances and overpower their opponents in the Grand Finals of the Starladder Ukraine Minor.

It wasn't an easy task. Alliance has been working hard at their game and the results back up their efforts over the course of the last two months. The Swedish based team were the first to claim a spot in the Grand Finals and a ticket to  Epicenter Major after a spectacular journey at Starladder Ukraine Minor. They tend to be a thorn in NiPs side, the team to have to overcome for them. It was Alliance that knocked NiP down to the lower brackets from the upper bracket finals 2:1.

Now faced with a re-match, NiP were out for blood. Alliance absolutely shellacked NiP in the first series with an end score of 14:44! It was a flawless performance by Michael "miCKe" Vu on Troll Warlord with a 12:0:22 score that just knocked NiP to the ground.

NiP answered the call by taking the next two matches in a very convincing manner, looking as if they were about to just take the whole cake from Alliance. Adrian "Fata" Trinks destroyed them in both matches, first on Mirana and then on Templar Assassin.

Alliance worked hard and haven't had a trophy to call their own all season - they weren't about to let this chance slip from them. In the fourth match, it was a thrilling back and forth game that took a full 60 minutes to determine the winner. With patience and their infamous defense, Alliance held on and turned the game in their favor at the end, tying up the series and forcing the final deciding game.

NiP used the chance to pull out a surprise Meepo pick for Marcus "Ace" Hoelgaard. With a flawless execution and performance on the hero, NiP just tore into Alliance and easily took the last game and the title. This was their second DPC title in a row, having just claimed it at Dota Pit Minor before heading to MDL Disneyland Paris Major where they ultimately took 5-6th place.

Although NiP doesn't need to worry about securing any more points to earn a TI9 invite, Alliance, who are on the cusp in 14th place, will need to make sure that they earn enough points to move up at least two spots and ensure that those below them won't pass - difficult? Yes. Impossible? No.

The Starladder Ukraine Minor was held from June 10-16th. Eight teams were competing for the lion's share of the $300,000 prize pool and 120 DPC points. Unlike all other Minors this season, Starladder awarded the top TWO teams a spot at the EPICENTER Major, the final spot in the DPC season events.

Can Alliance clinch a TI9 invite at EPICENTER Major?

Yes, they totally can
Thank you for voting!
No, they will fall short
Thank you for voting!
Cristy “Pandoradota2” Ramadani
Pandora is a behind the scenes Dota 2 professional Jack of All Trades. When not busy with Dota 2 work, she is out trying to save the world or baking cupcakes. Follow her on Twitter @pandoradota2
Share Tweet
137 people reacted to this post