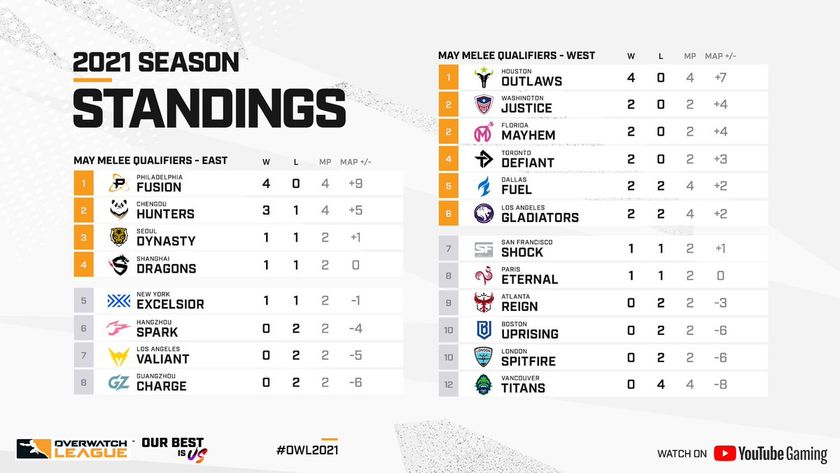 Breaking down the the most important matches and biggest stories of the May Melee Qualifiers: Week 2.

After struggling in Opening Weekend, the Los Angeles Gladiators bounced back with fury in Week 2 of the May Melee Qualifiers. On Friday, April 23rd, the Gladiators faced the London Spitfire.

This was the debut match for the 2021 Spitfire, a team built on the core of European Contenders Champions, British Hurricane. Though they dominated in Contenders, the mostly-rookie Spitfire squad was greatly outclassed and fell in a clean 3-0 sweep.

The next day, the Gladiators squared off against the similarly young and unproven Boston Uprising. Again, the Gladiators flexed their veteran prowess and sent the Uprising packing 3-0.

In North America, the match of the week was undoubtedly the debut of the Washington Justice. Their opponents were the Dallas Fuel, who looked strong during Opening Weekend, despite some unfortunate last-minute roster changes.

The Fuel fought hard and nearly took the Justice to Map 5, but ultimately, the star-studded Justice won 3-1, proving they’re ready to compete with the top teams in NA.

In Asia, the 2021 New York Excelsior played their first match of the season against the Chengdu Hunters. The Excelsior were another team of young, exciting misfits. Still, their roster raised questions about how this combination of players would gel together and whether they could compete with top Asian teams.

The Hunters have certainly been a top team in APAC so far and were clearly favored to win the match. Still, their face off was perhaps even more of a beatdown than expected. The Excelsior looked helpless, as they fell 3-0.

For the Hunters fourth and final match of the May Melee Qualifiers, they dueled the Philadelphia Fusion in Asia’s match of the week. Both teams were 3:0 in matches heading into this face off.

The Hunters took one map, but ultimately the Fusion proved to be the best team in Asia, winning 3-1. Despite their last-minute roster swaps, the Fusion players looked individually lethal and dangerously coordinated as a unit.

After Week 2, six teams have completed all four of their matches in the May Melee Qualifiers.

In North America, the Houston Outlaws stand firmly at the top with their 4:0 record. The Dallas Fuel and Los Angeles Gladiators fill out the middle of the standings at 2:2 each, though the Fuel takes priority after beating the Gladiators in Week 1. At the bottom of the list is the Vancouver Titans with their disappointing 0:4 start.

In Asia, the Philadelphia Fusion cement themselves as the only lossless team, going 4:0. The Hunters, with a 3:1 record are close on their heels though.

In Week 3, which begins on Thursday, April 29th and ends on Saturday, May 1st, the final standings will be determined, and the May Melee Play-In Brackets will be set.

Of the lossless teams, who looks stronger, the Houston Outlaws of the Philadelphia Fusion?