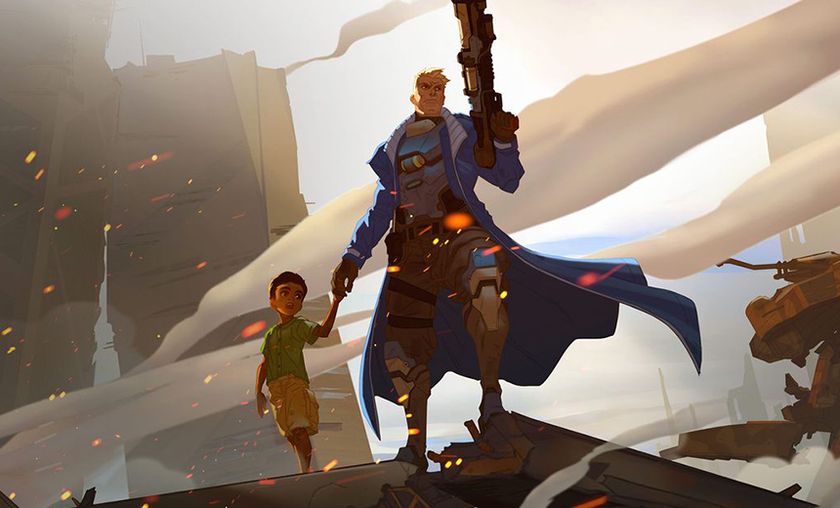 Overwatch: The impressions and confessions of an FPS layman

I was never fond of FPS games. Despite having the necessary speed, awareness and reflexes from the years I spent playing RTS games, I couldn’t aim well enough to save my life. The few times I got together with friends to play Quake, Unreal Tournament or Counter-Strike left embarrassing stains on my gaming career. It wasn’t my genre and it was never going to be, I swore, as I stuck to competitive strategies in their various forms.

This is largely the reason why Overwatch’s initial announcement at Blizzcon 2014 left me disappointed. As a Blizzard fan of more than a decade, I’ve been waiting for a new franchise for a while now. I warmly embraced the company’s bravery to step into card games with Hearthstone, but it was still the same familiar Warcraft universe I’ve visited countless times. And then came Overwatch, a title that promised me an unseen before world, with exquisitely designed terrains and characters, all wrapped up in the FPS shell I so detested.

As I played more games, I started realizing how much depth this game already has, and the enormous potential it holds.

If this was any other game from any other company, I would’ve looked the other way around faster than seeing an M. Night Shyamalan movie poster, but that was Blizzard so I had to bargain. “I will give it a try or two, to have more than a superficial reason to not play it,” I murmured after the Overwatch panel. Even when I saw the character gameplay videos Blizzard eventually released, I remained skeptical. I didn’t doubt the game was going to be good – it actually looked fantastic – but it didn’t feel like my pint of beer.

Last weekend, I flew to Prague for esports coverage purposes and in a couple of matches, Overwatch had convinced me I was wrong. So, so wrong.

The tangential interest towards Overwatch had me acquaint myself with all the information available to the regular user: I knew the two types of matches, the four character roles and the MOBA-esque skill set-up for said characters. I wasn’t completely in the dark, but even if I was it wouldn’t have been a problem: Overwatch’s intuitive interface and team-build helper was there to give us directions. "You need more offense characters", "you’re lacking a tank", "you have too many supports". That’s nice, I thought, if only I had that in my Heroes of the Storm ranked games, I would save myself a lot of nerves and vocal cords.

Despite being inherently intimidated by the FPS genre, I quickly found out that Overwatch is very welcoming to my kin.

Despite being inherently intimidated by the FPS genre, I quickly found out that Overwatch is very welcoming to my kin. After my first two games, I fell in love with Mercy, a mobile healer who flies across the battlefield to help wounded team-mates, boost their damage and even revive the dead.

The gameplay of Mercy was captivating. Neither of her abilities demanded bullseye precision and they’d automatically attach to the ally closest to my crosshair. My map awareness became my strongest ally. I followed the markers indicating where my team-mates are, I healed the ones in danger and if the entire team was safe, I would use my alternative “attack” on my staff to boost their damage. I was the best friend of the Widowmakers. When real danger came, instead of running around like a headless chicken as I would do in any other FPS, I flew to an ally and relied on his aiming skills to save my ass.

Some of you may call it cowardice, but I don’t care. For the first time in my life, I was enjoying a shooter game and was feeling useful. It was all new to me, and I started developing real affection for the world of Overwatch. 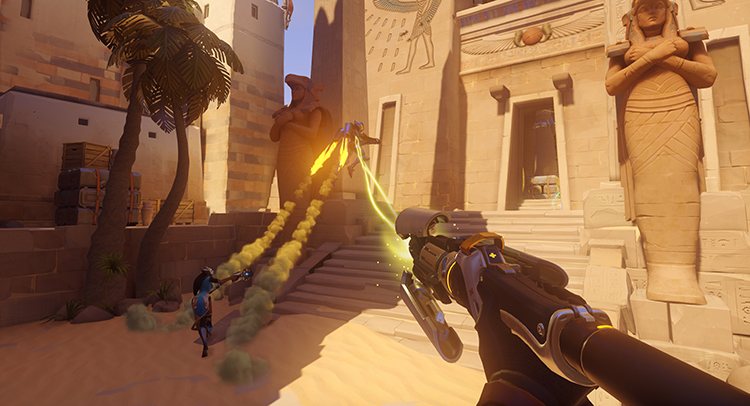 As I played more games, I started realizing how much depth this game already had, and the enormous potential it held. Different players were excelling on different roles, and a good mix-up of said roles was needed to form a strong team. I never felt obsolete just because I couldn’t one-shot people with Widowmaker, do the frantic blink style of Tracer or know every battleground by heart to drop Torbjörn turrets at the best places.

Mercy was not the only character that suited my FPS inexperience. I discovered Zarya, a shielding tank with a big pulse gun, which sacrificed precision for huge ground splash damage and a powerful crowd-controlling ultimate. It was a diametrically opposite playstyle to Mercy. I was not cowering behind my allies, but was in the thick of battle, soaking up shots and leading the offense towards the capture points. Sure, the McCrees and Pharahs on my team dealt more damage, but once again it didn’t matter – I was a necessary part of the team, I was contributing to our success in a substantial way. To remind you, this had never happened to me before in any FPS. I couldn’t stop playing now.

After what must’ve been ten matches, me and my colleagues sat down to casually talk Overwatch and, being esports journalist by calling, we entertained the competitive future of the game. See, we knew the game was going to be big for the casual player, but what about the tournament scene? Did the game have enough to offer? Or was it offering too much? There have been plenty of game titles that have gone the way of the dodo for swinging to either of these two extremes.

What we knew for certain is that the game was diverse. It lacked the skill cap of traditional FPS esports but it made up for it with unique characters, vertical combat and dynamic battlefields. Even more so, the option to change characters between deaths and even have duplicates on the same team was intriguing to say the least. A team running out of time to capture the last point could change their support into something more aggressive, a character that could win them these last few meters and secure the game. A team having trouble crossing the tunnel to the payload could swap their Winston tank for a Reinhardt and hide behind his shield to ram through the choke point. A team could change their entire behavior, switching from slower and hard-hitting heroes to lightning quick assassins and attempt a flank from all sides.

The options are endless.

The options are endless and the beauty in this is the restrictions. The death timer is mere five seconds, during which you have to decide is a character change warranted and if it does – what does the team need. Upon character switch you also have to sacrifice all the energy you’ve accumulated towards powering up your ultimate, another thing you have to account for. The clock is ticking and the battle rages on.

I could already visualize in my head a high level competitive match. The starting compositions are selected and bullets and rockets, and lasers, and grenades and healing pulses paint the map in war colors. The first deaths are in, but most of the players are sticking to their selection – it’s still too early in the match and they’re building up their ultimates. A big fight at the payload is coming and both teams have already gone through dozens of possibilities in the midst of small scrimmages all across the map. If they capture the payload but lose a player, he will respawn as Bastion for optimal payload escort. If they wipe but have enough time, they will switch to “Alternative Composition A”. If they wipe but are pressed on time, they will switch to “Alternative Composition B”, now featuring more firepower than a fully operational Death Star. At the same time, the team on the defense is making these same adjustments: Do they need more healing, do they need more turrets, do they need to siege the tunnel entrance, can they push the attackers further back and how to do it.

The game state changes rapidly, never staying the same for more than a minute or two. The casters run out of breath, trying to narrate through the on-field action and the strategic possibilities for both sides. The war is hectic and tantalizing, and makes you forget you made popcorns. And before you get tired, it’s over. Short break, the teams switch sides. Another countdown, another melee, another dose of adrenaline.

It’s marvelous. I want to spend my entire day shooting people in their faces.

This has never happened to me, ever.

What you need to know about Overwatch

Will Widowmaker be an Overwatch eSports staple?

How do you play Reaper in Overwatch?

Duelers, Leaders, and Supports: the 3 types of players we will see in Overwatch