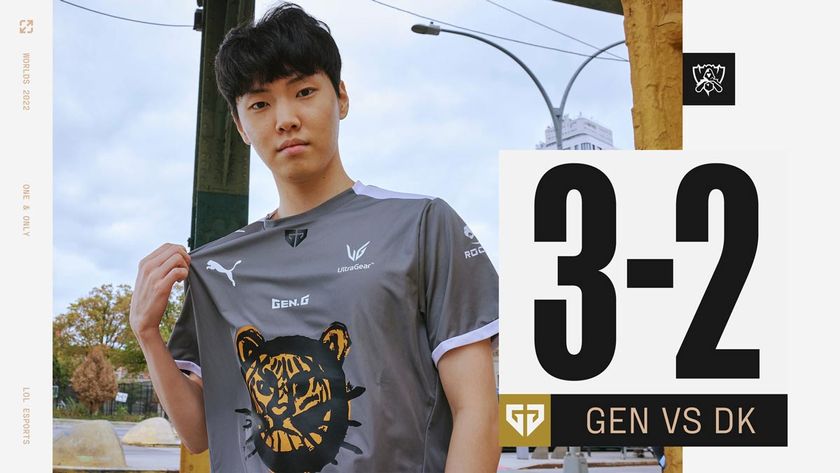 DAMWON Gaming has been eliminated from Worlds 2022 contention.

After an intense best-of-five series, Gen.G Esports has beaten out DAMWON Gaming to advance into the semifinals at Worlds 2022. While these games repeatedly came close to falling out of Gen.G’s favour, the team ended up winning 3-2 anyway - breaking the three-game curse that has plagued every losing team in the quarterfinals thus far.

Here are the current standings:

Gen.G has qualified for the semifinals, while DWG has been eliminated from Worlds 2022 contention. Tomorrow, EDward Gaming and DRX will battle things out to decide which team goes up against Gen.G.

The first match of the day went off to a slow start. Both teams played things carefully here, making sure they didn’t let an early lead slip by farming for gold and waiting for dragons. After a midgame skirmish however, Gen.G gained the upper hand by wiping out DWG and building a lead in gold. The rest of the match played out very quickly after that, with Gen.G’s Chovy and Ruler working in tandem to lay siege on the enemy base and upon wiping DWG out, stormed in with their team to crush the Nexus. A clean win for Gen.G.

The second match saw Gen.G take a pretty early dragon and a few kills to boot, bringing things to a roaring start. Despite the team putting on a pretty solid performance in the early game however, DWG showed up in the midgame - downing two objectives and asserting map control while keeping Gen.G off its own. The killcount had gone stale by the 20-minute mark, at a mere 3-2 in Gen.G’s favour. Gen.G then stole the Baron from DWG, which was enough to give it a key lategame advantage.

This match was a lot closer than the last, with DWG still having a real shot at a win if the Baron hadn’t been stolen from their grasp. Despite the team putting up a good fight near the endgame, it still lost this one to Gen.G - having given away too many dragons, and lost too many skirmishes.

The third match began with DWG playing confidently, picking up a gold lead and two kills to Gen.G’s one. The team took down two dragons and two turrets, but Gen.G was having some real trouble coming together to do the same. DWG continued to push into the midlane and break down a turret, utterly dominating the map at this point to ensure it had a straight path into Gen.G’s base. After wiping Gen.G out following a skirmish over the Baron, DWG took the opportunity to stroll into the enemy base and take an easy win. With the score now at 2-1 in Gen.G’s favour, DWG ensured that we’d see both teams play more than three matches.

Much like the last match, this next game kicked off in DWG’s favour - with the team pocketing two kills not even five minutes in. DWG picked up two dragons and went 4-0 in kills by the 15-minute mark, with Gen.G already at a sizeable gold deficit. DWG cleared out the top lane of turrets partly thanks to Canyon, who happened to have a 5k gold lead on Peanut, but Gen.G hadn’t snagged a single objective yet. With 10k more gold in its pocket, DWG had no problem wiping out the enemy team and storming its base, scoring its easiest win yet.

The fifth game of the day began at a crawl. The first big skirmish went down over a dragon, finally seeing First Blood go to Gen.G. While both teams were still playing tug-of-war over map control, Gen.G was in a comfortable gold lead - though Canyon was still a force to be feared in the jungle. While DWG was busy in the top lane however, Gen.G pushed into the midlane and cleared the inhibitor and tier three turrets - creating a clear path into the Nexus for the inevitable siege to come.

Half an hour in, we saw DWG score an incredible upset by wiping out Gen.G to take a Baron - ensuring that the team was back in real contention for the rest of this match. The team continued to claw out of a rough lategame successfully, picking up dragons and shortening the gold gap. The team tried to nick a Baron from Gen.G but failed, which ultimately allowed Gen.G to roll into a massive fight in the toplane that saw DWG get wiped out. Gen.G took that victory to roll into the enemy base and crush the Nexus. This was its closest win yet.

Who do you think will win tomorrow's match?