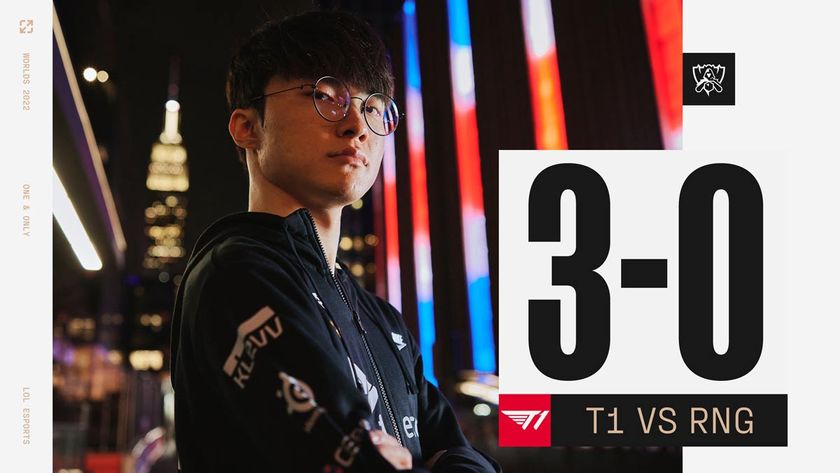 T1 will now go up against JD Gaming in the semifinals.

T1 has ensured that Royal Never Give Up’s Worlds 2022 journey would go no further than the quarterfinals today. After an intense series of back-and-forth matches, the LCK team came out triumphant by the skin of its teeth. Royal Never Give Up came close to taking this victory for itself, but ultimately couldn’t seem to keep a lead going.

With this win, T1 has avoided the Worlds 2022 semifinals from turning into an all-LPL affair. The team has secured a spot in the semifinals against JD Gaming, who just swept a victory from Rogue yesterday. Whoever wins that match will advance to the Grand Finals and decide the overall victor of Worlds 2022.

The first game saw both teams hit the ground running. It took time for either team to pick up an objective, but T1 picked up a gold lead early and kept widening that gap throughout the match. The LCK team picked up two turrets in the toplane and began to assert control of that section of the map aggressively, with RNG still struggling to farm for gold and chase objectives at the same time. By the lategame, RNG was at a clear disadvantage - T1 had downed six objectives and thus dominated the map, and RNG had failed to put up a good enough defense to stop this from snowballing into the win. T1 won this one.

The second game of the day was very much the opposite of the first. RNG took an incredibly early lead here and T1 just couldn’t pull together a recovery for a very long time. By the 15-minute mark, RNG had a 3k gold lead and six kills to T1’s one, proving that it wasn’t about to take its first loss lying down. RNG had more than enough fight left in it. RNG went on to pocket three dragons and utterly annihilate T1’s turrets. It was RNG’s game at this point, and T1 had no choice but to be on constant defense.

T1 did not go gently into that good night, however. After managing to come out on top against RNG in a skirmish, the team began to even out that gold deficit and start pushing into the enem team for kills. The team managed to break an inhibitor before backing off, turning the game over in its favour until it scored a decisive victory. A massive comeback for a team that was now going 2-0 - and a really rough loss for RNG.

The third game played out more in T1’s immediate favour. Both teams came out swinging, but T1 gained the upper hand in early teamfights and those kills rolled together into a midgame gold lead. T1 gained two objectives to RNG’s zero by the midgame and began pushing into the midlane, but RNG was mounting a good defense. T1’s Zeus and Faker were hard to overcome here, constantly coming out on top whenever they pushed in for a kill or to chip away at a turret - though RNG’s Gala gave them a run for their money. Still, an 8-17 killcount in T1’s favour was difficult to come back from.

With a whopping 10k gold lead and dominant map control, T1 won its last game of the day.

The second match of the quarterfinals is now complete, seeing T1 emerging victorious after three consecutive victories against RNG. Tomorrow, we’ll see DAMWON Gaming go up against Gen.G Esports to decide which of the two teams will advance to the semifinals.

Who do you think will make it out of the semifinals?