Follow the action from Ericsson Globe and don't miss a single minute of the BlizzCon Europe qualifiers.

Kolento expectedly dominant at the end of the day

Cloud 9's ace Kolento broke the curse of community favorites getting upset by underdogs as he swept clean Spaniard TheFallen in the final match of the day. Running his aggressive Druid, the Ukrainian got an easy win against TheFallen's Warrior in the series opener and continued to be absolutely flawless in the next games as well. Always getting strong, on-curve opening hands with [card]Wild Growth[/card] and/or early [card]Shade of Naxxramas[/card], Kolento's march through the enemy Paladin and Miracle seemed effortless, delivering the second 3-0 for the day after Thefishou's dominance over Lifecoach. 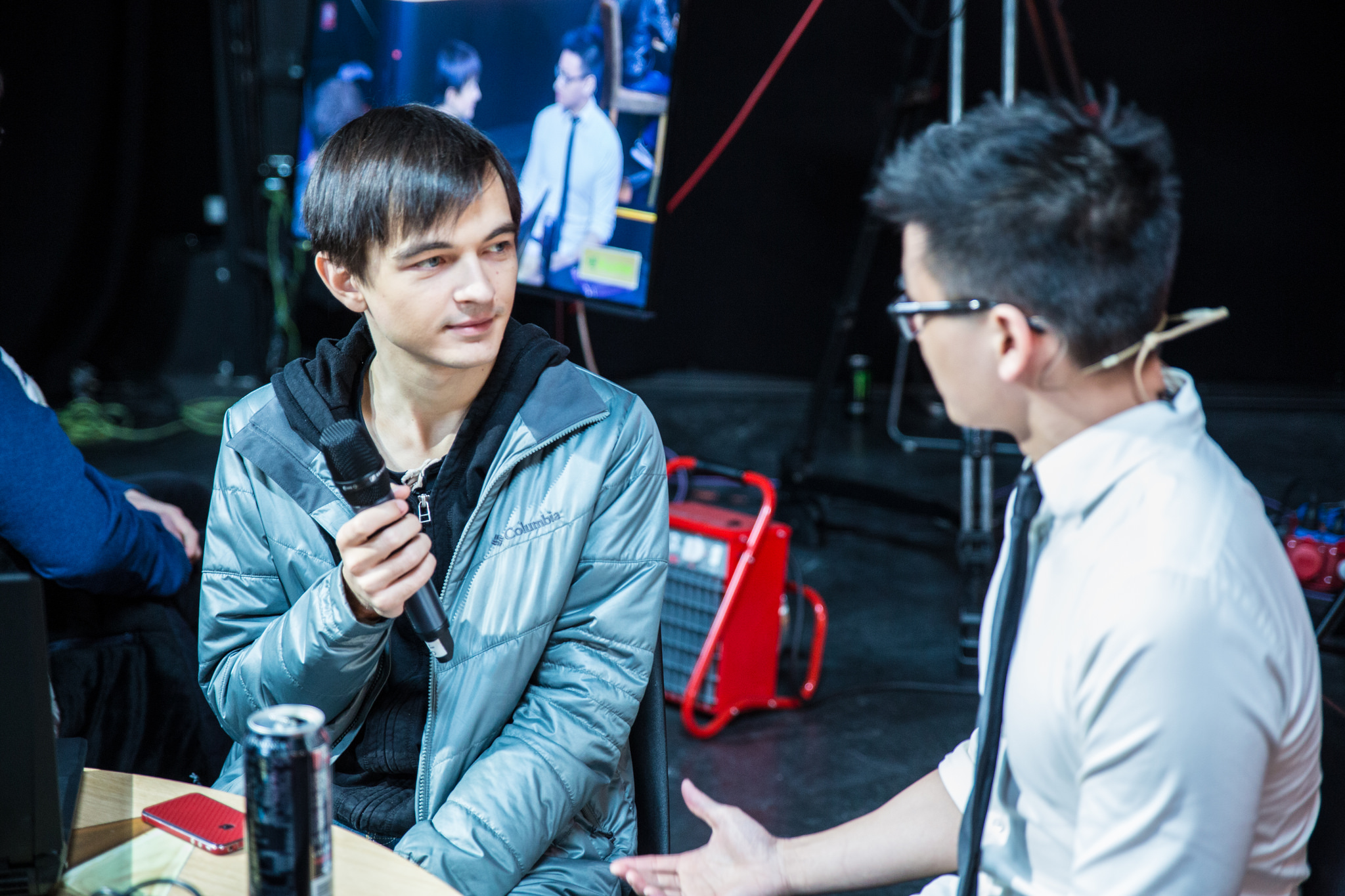 The Group D opener started with TheFishou on aggro Mage against Lifecoach on Miracle, a game that ended in a blink. Not getting either [card]Backstab[/card] or [card]Fan of Knives[/card], Lifecoach watched his life total evaporate by T6. Game two was equally quick as once again Lifecoach failed to find the cards he needed, either [card]Consecration[/card] or some sort of life gain.

Soon thereafter, the aggro Mage brought the first 3-0 for the day as it got a very favorable match-up against Lifecoach's Handlock. A couple of [card]Mirror Entity[/card]'s kept the tempo with Thefishou throughout the game, eventually forcing Lifecoach to concede.

"Lifecoach and Kolento are both strogner than me, that's why I chose an aggressive deck list this," share Thefishou in his post-game interview, also thanking Savjz for his help in building the deck.

Reynad got a fantastic start on his Druid against Yagut's Rogue, putting a T2, T3 and T4 [card]Chillwind Yeti[/card]s, forcing Yagut to burn a [card]Sap[/card]. By T7, the German has parted with half his life points, facing 12 damage on the board but critical draw from [card]Gadgetzan Auctioneer[/card] gifted him a [card]Blade Flurry[/card] and the Druid is wiped out for the 1-0.

The game got tied very fast as Backspade Rogue did what Backspace Rogue does best - kill Miracle Rogues. An immediate counter came in turn from MrYagut, as control Warrior was pulled out to shut out Valeera's aggression. This put Reynad down to his last deck - Hyped's secret Mage - and the Tempo Storm captain fought to end the day in the positive.

Jaina took game four easily, freezing the Warrior several turns in a row with [card]Water Elemental[/card], putting down a sticky board and winning it in the late game. The final map then pitted the Secrets Mage against a standard mid-range Shaman, the latter suffering a terrible loss to a T6 [card]Flamestrike[/card]. Even after the board clear, however, Reynad continued to be under Shaman fire and the first [card]Ice Block[/card] was soon popped. Even though Reynad was able to get two [card]Molten Giant[/card]s out for free, not getting his second Immune secret cost him, as a charging Al'Akir deliver yet another upset.

Thijs, I think I can make it"

The match started with ThijsNL getting a perfect draw on his control Paladin against Greensheep's Handlock. Packed to burst with [card]Equality[/card]'s and [card]Humility[/card]'s, the MYM player dwarved down the gigantic threats of the Brit and takes the series lead.

Game two, howeer, is much longer. In a control Paladin mirror, Greensheep stumbled upon a crucial [card]Lay on Hands[/card] to refill his hand and gain important card advantage. After waiting out Thijs' board clears, Greensheep populates the board and pressures for lethal and the series tie. His Paladin is quickly retired, however, as Thijs brings out a Priest deck and forces Sheep into an unfavorable match-up. The Priest takes tempo from early on and punches the Brit into 1-2 deficit.

Down to his last deck - a Shaman - things were not looking good for the Dignitas player. Running a more mid-rangey deck, Greensheep only managed to eat away 3 points of health from Thijs by T7. A couple of [card]Fire Elemental[/card]s stabilize things for Greensheep a bit but [card]Sylvanas Windrunner[/card] comes down and Greensheep has no answer. The Brit, however, decided to bypass it altogether and pressed for the faces which eventually paid off as no AoE is available from Thijs.

It was a Shaman mirror for the final game, opening with Thijs mulliganing into two [card]Unbound Elemental[/card]s and two [card]Lightning Storm[/card]. With no good early turns, the Dutchman was put into big disadvantage as both his Elementals were dealt with and his life dropped to half. On T7, Thijs was forced to double Storm to clear the board but Greensheep re-populated immediately, throwing double [card]Feral Spirit[/card] the next turn and checkmated for the win. 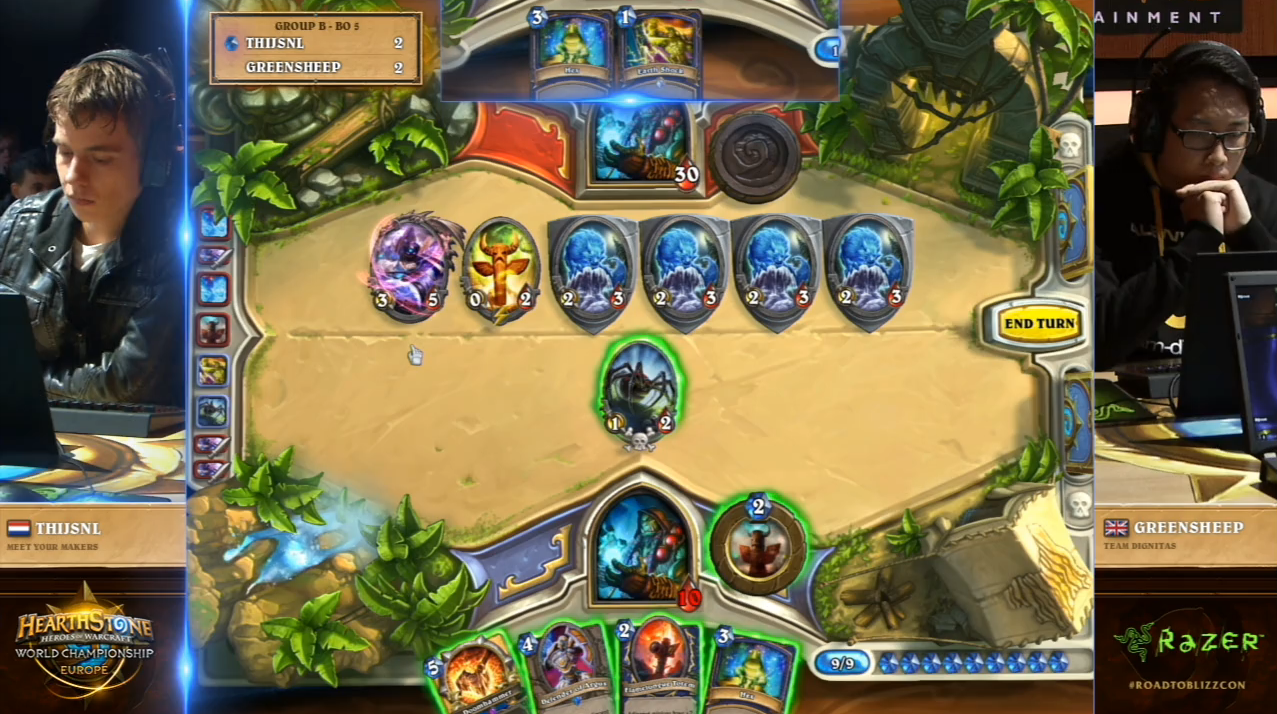 Neirea: "I consider him the best player here"

Innovation player Numberguy opened the tournament with a clutch comeback after team-mate and VGVN silver medalist Neirea. Paired with the top two seed for the tournament, the Dane came in the match-up as the underdog and two series into it, he was already down 0-2. Running a mid-range Druid, Neirea was able to slap down his opponent's Warlock and Miracle and Numberguy's last hope was the Priest, ironically built by Neirea himself.

Game three was where the comeback started as Numberguy wont he card advantage game and outlasted the Druid it to make it 2-1. The score was one long Priest mirror later as Numberguy flooded the board to checkmate Neirea's chances of a comeback.

It all came down to a final game five in what was a nailbiting Priest versus Hunter. Running a very aggressive Rexxar, Neirea ate away at Numberguy's life total quickly. Staying several turns one damage off lethal, however, gave Numberguy the time to dig for his [card]Holy Fire[/card] and turn the series around.