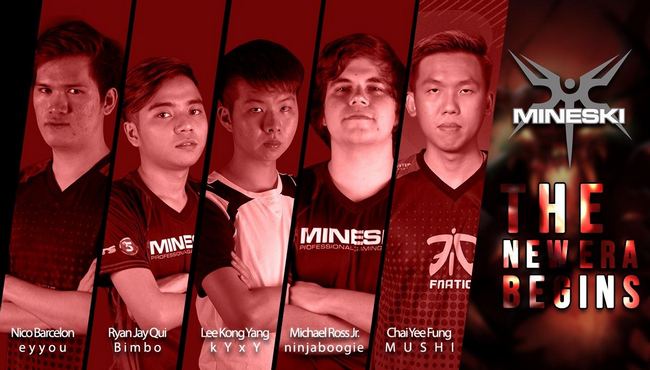 The new roster of Mineski has been put together and has already jumped into battle at the SEA Kappa Invitational Season 4.

Only Ryan 'Bimbo' Jay Qui and Michael 'ninjaboogie' Ross Jr. were kept from the old Mineski roster, captain Chai 'Mushi' Yee Fung choosing to bring in a few familiar faces of the SEA scene. Lee 'kYxY' Kong Yang, who shares two Internationals with Mushi, will now play once more on the same team with the living legend, and surprisingly enough, Nico 'eyyou' Barcelon, who had a brief stint with the post TI6 Fnatic roster, is now co-opted on Mushi’s new team. Eyyou, despite his amazing achievement from TI6 with TNC, had a disappointing follow up period when he moved to Fnatic together with Raven and DeMoN.

Seems like Mushi put behind all the dire days shared with Eyyou at Fnatic and will give him another chance to adapt and grow alongside some of the most experienced players from the SEA region. The other support for the new Mineski line-up is kYxY, whose shared Dota 2 history with Mushi goes way back to The International 3 days. Back then, the two of them were playing for Orange Esports and placed third at what many fans deem the most memorable International from them all. kYxY was also one of the founding members of Team Malaysia which later on was acquired by Fnatic.

The new Mineski line-up will have to hit the ground running as the SEA Kappa Invitational Season 4 group stage kicked off yesterday with the first match of Group B while today, Bazaar Youth are facing the reformed Mineski.

Will this new Mineski roster become a strong contender on the international scene?