How did Alliance fare so badly at TI4? What went wrong?

DISCLAIMER : This is an opinionated article and the opinions expressed in it do not reflect those of GosuGamers.net or any affiliates.

Having beaten veteran team Natus Vincere in an epic best of five, Alliance claimed the first place prize of TI3, which cemented their position as a force to reckon with in the Dota 2 scene. In the run up to TI4 they won the Dream League on their home turf in Sweden, beating Cloud 9 and asserting themselves again by winning the competition that originally gave them international recognition. So going into this year’s TI, they were looking strong in spite of some slip ups here and there, notably in the D2L Western Challenge; not making it past the first game of the playoffs. They had a lot to prove and a title to contest, but how could such a prominent team be so catastrophically undone in the group stages?

Alliance definitely have a unique playstyle. It is one that they have perfected over time as a team and has evolved from some of their more creative drafts as No Tidehunter into what has been quintessential rat DotA. They control the map and are arguably at their best when they are behind. The team never let themselves get trapped in their base and have so often split push and ground their way to victory. With AdmiralBulldog and S4 creating space for the rest of the team, they have perfected the art of split push and mobility. The style receives a fair amount of criticism in the community, as the way the team plays is slated as either cowardly or boring, but whatever you think it has worked wonders for them until now. Here is one of their drafts from their recent victory at Dream Hack: 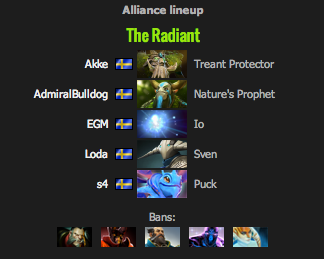 In many ways this draft is able to transition very well through each phase of the game. The early lane support from Treant Protector and Io works perfectly to give Sven time to farm. S4's Puck is another solid pick as he has strong laning at mid that moves perfectly into a ganking and controlling role. The early push from the Io/Nature's Prophet combination also works well to get early objectives. There is even significant team fight control with Puck and Treant, allowing Sven to clean house. However, the best part of this strategy is that it can go as far into the late game as you want. If all else fails, Io, Puck and Sven can buy all the space in the world for AdmiralBulldog to do his thing and take down those enemy towers. You may think of it as cheap or genius, but there is no denying it works well as a fail safe mechanism.

One of the key reasons for their failure looks to be in the other teams simply having them figured out. The lineups they used in both the TI3 Grand Final and the Dream League Grand Final were, in essence, very similar and relied on the principles of split push they are so comfortable with. AdmiralBulldog has even crafted his Nature’s Prophet build so finely recently that he has pioneered buying a Blink Dagger and Maelstrom on the hero. These items give him exactly what he needs to move around the map and push out lanes, doing what he does so well and so annoyingly. The team's carry player Loda put it best himself in an interview about the Dream League Final: "We felt that we could win the game, but... it was just about me and EGM creating space just so that Bulldog could split push one of the lanes. Then we'd, like, try to soak them up so that we could get a rax. They had better lategame for sure, but then we just outmaneuvered them I would say". This style of play is summed up in those sentences and when Alliance used it properly, the strategy yielded results.

What we saw in the group stages of TI4 was nearly identical bans across the board from opposing teams. They instantly removed Nature’s Prophet and IO, which takes out two huge components of the lineup they feel most comfortable with. Here is a cross-section of their bans up until the last say of the group stages: 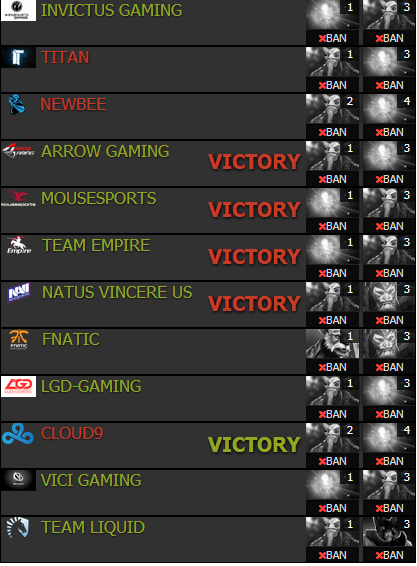 Alliance were forced into playing without those two crucial heroes for nearly every game they played. The result was that they had to try something else. They tried to pick creative heroes like Ogre Magi and take the fight to the enemy team, but it just didn't work out for them. Many will say that these results show that the side is just one dimensional and cannot play without their golden picks. However, it looked as though they should have been able to cope without. Theoretically, having a strategy that is so powerful in your arsenal that teams you play are unable to use their first two bans freely, should set up the draft in Alliance's favour. Essentially, they made teams waste their first two bans in a sense because they were so scared of the power the heroes had in the splitpushers' hands.

As we saw, when Alliance were allowed to play the game that they wanted to, they were more than capable of avoiding fights and patiently pushing out lanes. Playing their last two games against Na'Vi and EG, they managed to play their classic style even without the signature AdmiralBulldog Nature's Prophet. It wasn't enough to take down EG, but it showed it's real power in avoiding the Na'Vi teamfight and ended up taking the game to a base race:

Alliance managed to play the game they wanted to with different picks. But they still couldn't quite bring it home, which really leaves everyone wondering whether the days of the Alliance split push are over. Teams clearly came into TI4 knowing what to expect from them. All the while it looked like they had set the trap perfectly to lauch a surprise strategy on they're lured opponents, but it never really came. Without the game style that won them TI3 in the nail-biting game five base race, Alliance seemed to crumble. We will have to see if they can bounce back from this early exit and adapt to a metagame that may have them beat right now.