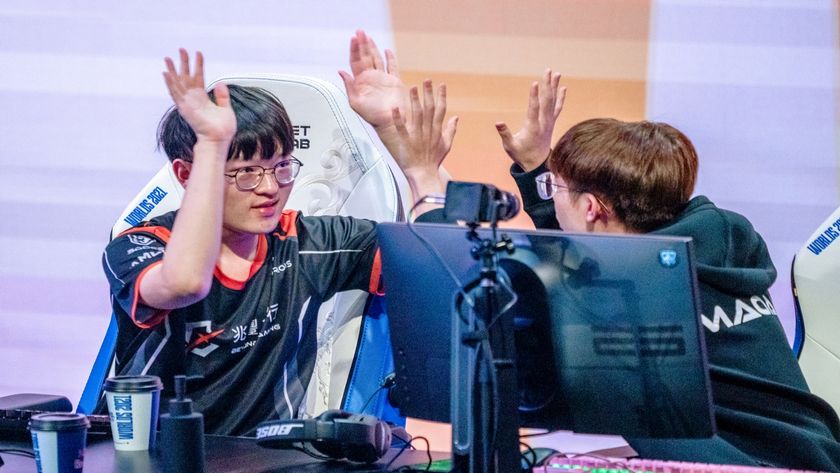 Beyond Gaming pulled off the comeback of the tournament so far after dropping the first two games and clawing back in the next three.

On the first day of the Play-In Stage: Round 2, we saw Beyond Gaming face up against Galatasaray Esports in a thrilling best-of-five that could've gone either way. The second-placed team from the PCS went to all five rounds against the TCL victors, dropping the first two games of the series but managed to bring themselves back from the brink of defeat by winning the next three games in a row. It was a series that definitely lived up to the hype as both teams went into it with something to prove.

Galatasaray headed into the first game on the front foot, establishing a decent gold lead from early on. For the most part, the early game saw very little action aside from both teams trading a couple of kills. While Beyond did manage to keep things level when transitioning from the early to mid-game portion, they started to slowly take control, landing key kills on several Galatasaray champions and establishing a sizeable gold advantage. But even if Beyond were leading to a certain extent, experience-wise it was neck-to-neck.

Heading into the late game portion, Galatasaray had managed to keep the gold deficit to a slim lead. While Beyond did look like they had control over the game, it was Galatasaray who was setting the tempo and deciding when was the best time to fight. By 30 minutes, it looked like Beyond were going to run away with the first game, especially with Chiu "Doggo" Tzu-Chuan having one of his best games of the tournament so far on Kai'Sa.

But this is where things started to go downhill. After slaying the Baron Nashor, Beyond got jumped by all five of Galatasaray and an immediate team fight broke out. It looked like it was going to be all over for Galatasaray as soon as it began as they lost both Roh "Alive" Jin-wook and Onur "Zergsting" Ünalan at the start of the fight. However, because of their deaths, they also managed to force three members of Beyond into bad positions, leaving the rest of the team to fight in a three-versus-two situation. After taking down both Kai'Sa and Yone, both teams went at it once more in a three-versus-three fight, which Galatasaray played to perfection, particularly Onur "Bolulu" Can Demirol and Kim "Crazy" Jae-hee with the former coming in clutch with the Elder Dragon steal.

While Beyond still held a decent gold lead, you could sense the palpitation in the air as Galatasaray were already building on their previous team fight, knowing that they can take on the PCS squad head-on. It all culminated into one last team fight where Beyond tried to contest Galatasaray's Dragon attempt. After failing to snatch it, they got forced back and lost two in the process, paving the way for Galatasaray to march down Beyond's base. From then on, it was only a matter of time before Beyond threw in the towel. This game also happens to be the longest in Worlds 2021 to date, overtaking the first game of the day, which ended in 40 minutes.

The second game told a different story in terms of pace and tempo with both teams wanting to go at it. This time, Galatasaray were on the front foot from the get-go, securing the first blood before five minutes. But it didn't stop there. Beyond were ready for it and had multiple rotations to the bottom lane, taking back two kills in return; a good trade overall. What Beyond does well is taking the lead after having a good start, even if they had to give up the first blood. From then on, Beyond had the entire early game lead in terms of gold, levels, and kills, similar to game one.

The pace of the game started to slow down come the mid-game portion as both teams were content in sitting back and farming. Beyond still held a reasonable gold lead over Galatasaray but were not getting much out of it. Both teams ended up clashing in the river and the TCL victors were able to sandwich Beyond into the corner. But instead of fleeing, Beyond turned the fight around and was able to take away three kills for the price of one.

Soon after, Beyond was knocking on the front door of Galatasaray's base come to the 20-minute mark. Alas, they paid the price for their overcommitment, losing a two for one trade-off. The entire game for the most part was all back-and-forth with both teams going for kills whenever possible. While Beyond was still leading the game, Galatasaray was slowly edging their way back into it. As the game wore on, Beyond looked like they were losing their grip of the game, which was the opening Galatasaray needed to keep the game level.

Both teams were constantly going at one another with one such instance being the fight around the Dragon. A huge clash broke out and when the dust settled, it was Beyond who came out on top, losing two but taking four from Galatasaray in the process. It looked like the game was on its last legs with beyond breaking the mid structures of Galatasaray's base. From there, Beyond went for their Baron attempt and was successful, but it proved costly in the end. Galatasaray was able to give chase and eventually took down four of Beyond. This gave them the opening they needed to push through Beyond's base to end the game.

With the first two games in the bag, all Galatasaray had to do was take home the third match. Beyond decided to adopt a different approach this time in terms of the draft, picking up the Miss Fortune + Amumu combo, something that has been tried and tested during the first round of the Play-In Stage but to little success. This time, however, it proved to be Galatasaray's undoing.

In the hands of Doggo and Wu "Kino" Hsin-Jung, it turned out to be an instant success as Beyond found the first blood and an additional kill on the bottom lane just three minutes into the game. Unlike the first two games, this was much more evenly matched. But game three does tell a different story in the end as Beyond looked much more composed this time around.

Beyond were able to establish a healthy lead over Galatasaray, always keeping them at arm's reach whilst still giving themselves enough space and time to farm and push. Galatasaray didn't look at all comfortable in game three as they might have just let the pressure of winning the series get to them. Beyond looked way more potent and clinical, able to land their spells in perfect unison. They eventually forced their way into Galatasaray's base as they had no way to respond, ensuring that they are still in the series.

With their tournament lives hanging in the balance, Beyond's fate was in their own hands. They went with the same two picks of Miss Fortune and Syndra while Galatasaray stuck to their guns with the same three picks of Talon, Ryze, and Ezreal. It didn't take long before blood began to spill all over the map with both teams going for the jugular. Heading into the mid-game, both teams were square across the board aside from the kill count.

Doggo was having another masterclass on Miss Fortune, being the only player to not die so far past 20 minutes. Beyond began to ease themselves into the game more and it showed, wiping all five of Galatasaray after attempting to go for the Dragon. It felt like Beyond was slowly pulling away from Galatasaray and they probably felt it too, which is why they went for a split-push that worked out in their favour. They managed to destroy Beyond's top-side Turret but paid the price soon after, having two members wiped while trying to escape.

Another fight broke out in the middle lane soon after with the three remaining members of Galatasaray getting killed without even taking out Beyond's Outer Turret. From then on, it was Beyond's game to lose and lose they did not. After pushing out the top lane, Beyond managed to catch Galatasaray out of position and was able to get the jump on them, killing four and thus, forcing a game five.

When Galatasaray won the first two games, many thought they would've gone on to sweep the series. Even after losing the first game, it was still possible. With the momentum well and truly on the side of Beyond, you knew it was their time, And for the third game running, it was Doggo on Miss Fortune once more. As always, it started in a fiery matter with Galatasaray getting the first blood and Beyond responding in kind with two kills in return.

Much like the previous two games, Beyond was in complete control, not allowing Galatasaray any space to farm on the map. This gave them the freedom to push and farm at will, giving themselves even more map control. But that didn't last long as Galatasaray managed to catch up to Beyond, drawing level in gold and experience. In yet another Dragon attempt, Galatasaray gets caught out once more, this time losing three. With nobody left to defend the base, it was Beyond's moment to end the game there and then.

Beyond were in the base before you could blink and in a matter of seconds, the Nexus was destroyed. All in all, the PCS representatives managed to mount a monumental comeback against all odds. They now go into the finals facing up against Hanwha Life Esports.

Which has been the most entertaining game so far?