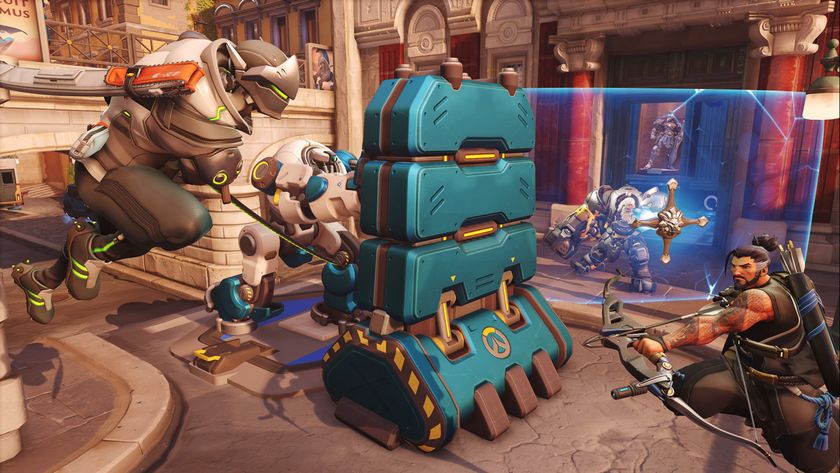 We’re breaking down all of Overwatch 2’s new maps and Push game mode from the closed beta.

We’re a few weeks into Overwatch 2’s closed PvP beta, which has given us more than enough time to dive into all of its new maps and try out the new game mode Push. Overwatch has always delivered on the map front (setting aside Horizon Lunar Colony), featuring colourful environments set in real-world locations with a futuristic twist.

The sequel is no different, introducing players to four all-new maps designed from the ground up with the game’s new 5v5 team makeups. According to Blizzard, more maps will be added to the game over time - but let’s talk about the four we have right now. Existing maps have also seen some tweaks, with the sequel’s new lighting system and 5v5 teams pushing Blizzard to introduce map redesigns and time of day settings.

What are Overwatch 2’s best new maps, and what are its worst? Let’s find out. 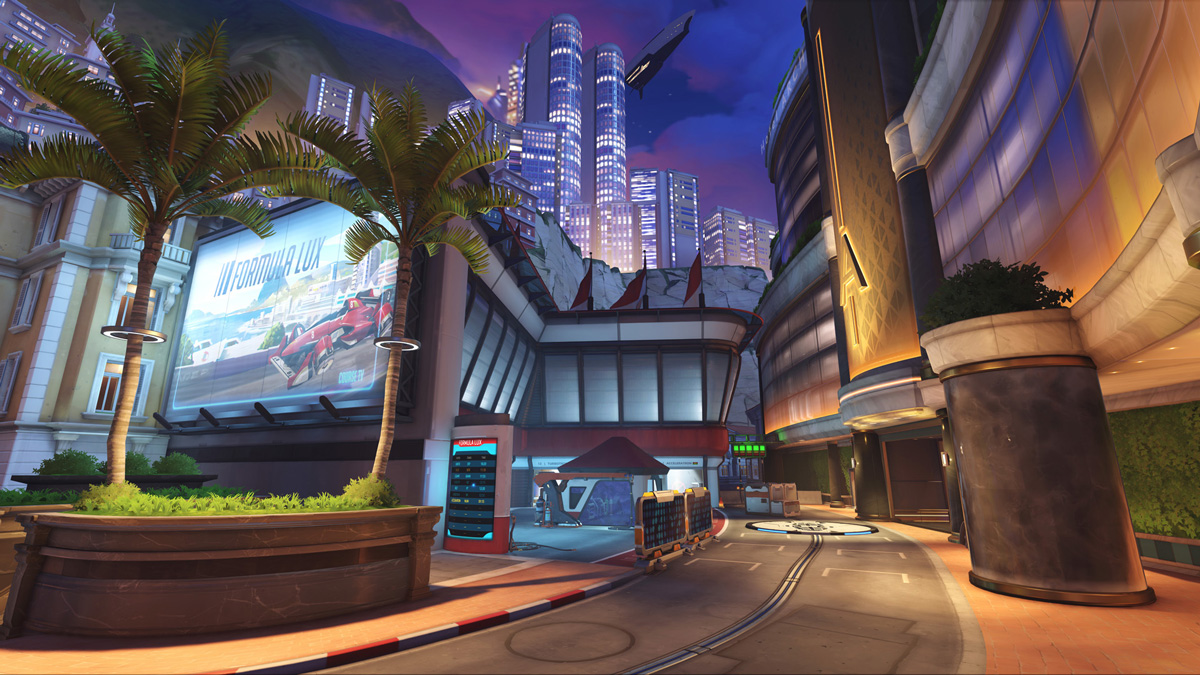 Circuit Royal is an immediate standout, blending the high-tech shining architecture of futuristic cities like Numbani with the pulsing hedonistic nightlife that surrounds a casino. This Escort map has players protect a payload all the way to its final destination, which begins with an extremely tight first corner where the defending team has full advantage of multiple high vantage points. Point A takes the attacking team around a long winding road uphill where they’ll have to keep an eye out for the high ground.

Once they hit point B, attackers enter a luxurious hotel lined with golden walls, robotic waitstaff and hovering cars. This part of the map looks a lot like the back half of Dorado, where both teams have a nice mix of elevated terrain to dance around the payload without getting squashed. There’s also a swimming pool outside, if you’re thinking of taking a dip. Circuit Royal is a gorgeous place to explore, and while Overwatch heroes seem a little overqualified to escort race cars in Monte Carlo, it does make a fun setting for an Escort map.

Gameplay-wise, Point A is an intense but fun change of pace in the existing playlist of Escort maps, and its narrow corridors and tight turns suit Overwatch’s new 5v5 teams much better. 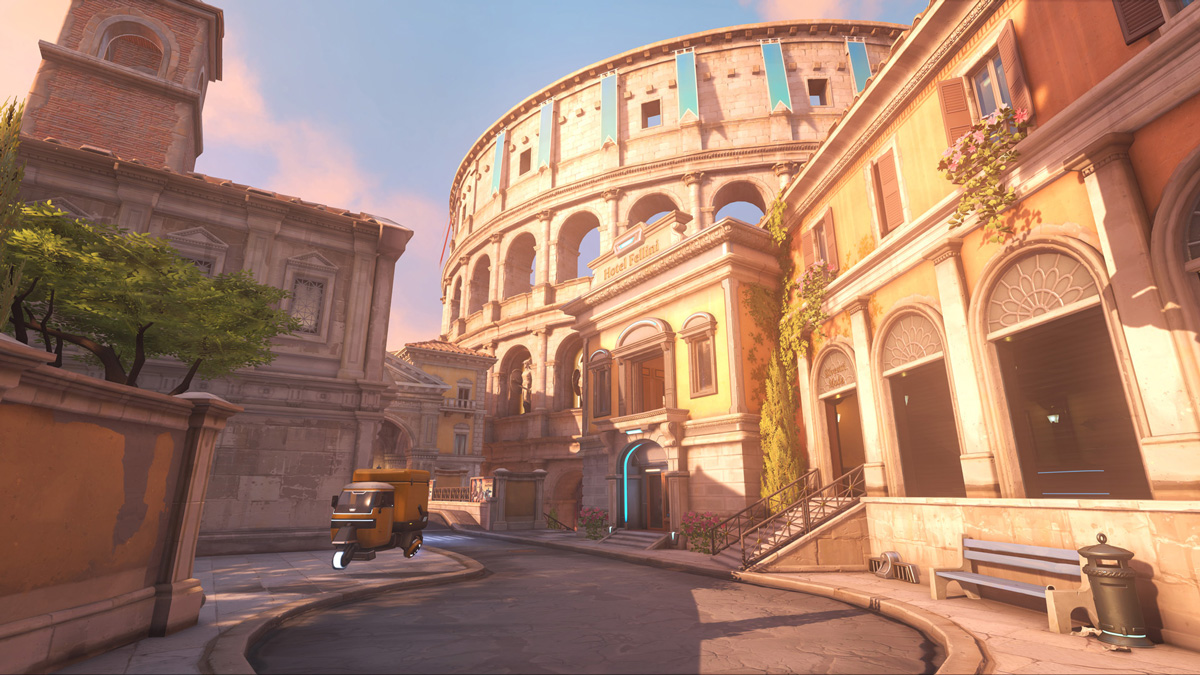 Colosseo is one of the game’s many new Push maps. Push is a whole new game mode in Overwatch 2 that has opposing teams fight to move a robot from one side of a map to the other. Maps are built from the ground up for this specific new mode, making them a whole lot more exciting than yet another Escort map (no shade to Circuit Royal, though). They’re symmetrical and peppered with lots of shortcuts and flanking routes to allow teams to quickly catch up with a robot on the move. Either that, or catch an enemy teammate off guard.

Colosseo is a beautiful place, bathed in golden hour lighting that has become something of a meme for this sequel lately. The map’s big setpiece is Overwatch’s version of the Roman Colosseum, which players will fight around - but never actually enter. Once you push the robot out from the side of the Colosseum, you’ll wind up on a path that takes the team through bridges and houses. Things eventually open up, giving long-range Heroes plenty of opportunities to slim down the enemy team.

Colosseo is a ton of fun to fight through with eye candy galore. Overwatch’s incredible art team has delivered a stunning level of detail here, whether it's the Roman streets and houses connected by bridges, posters referring to highly-anticipated gladiator matches or statues that might or might not hint at upcoming additions to the playable roster. With lots of high vantage points, obstacles to find cover behind and doors to peek through, most Heroes will have no problem finding something to do here. 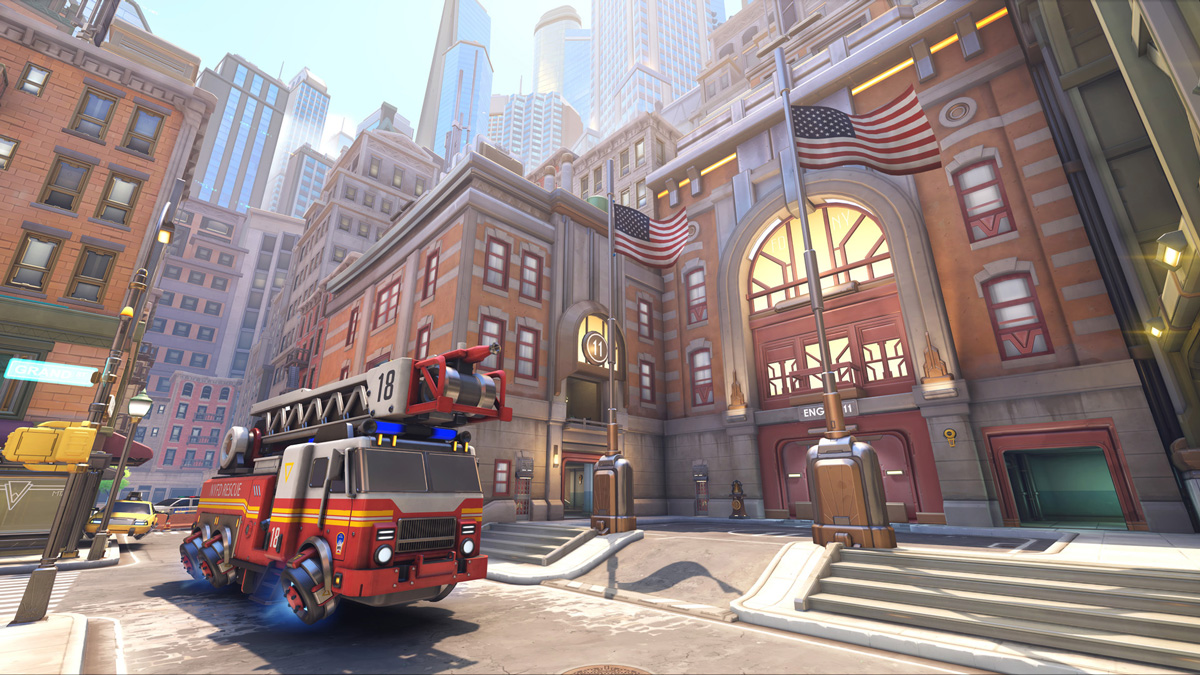 Welcome to the Big Apple! Midtown is a Hybrid map, giving attackers a point to capture before they get a payload to escort. The map is based on New York City with a futuristic twist, but its skyscrapers, train station, pizza parlors and taxis littering the streets remain unmistakable. The concrete jungle setting of this map sets it apart nicely, and has some nice open areas begging for big intense teamfights too.

Attackers will be funneled through a tight sequence of roads before choosing between taking the high ground or continuing onwards. The high ground takes them through a very narrow train car, offering defending Reinhardts and Symmetras a good shot at mowing down the enemy. Your objective is a capture point at a fire station, whereupon you get a payload to escort in the form of a fire truck.

The objective is to get this fire truck to Grand Central Station for one final push. The path there most closely resembles the map Hollywood, with some open spaces, some tight corners and lots of high vantage points for sniping. With this, Overwatch 2 is three-for-three with fun maps set in interesting locations, but something about Midtown’s big city setting called us back to it the most often. No two games are the same, with multiple routes to both objectives and lots of potential for big plays from every kind of hero depending on where a teamfight happens to roll out. The pizza place is a definite plus. 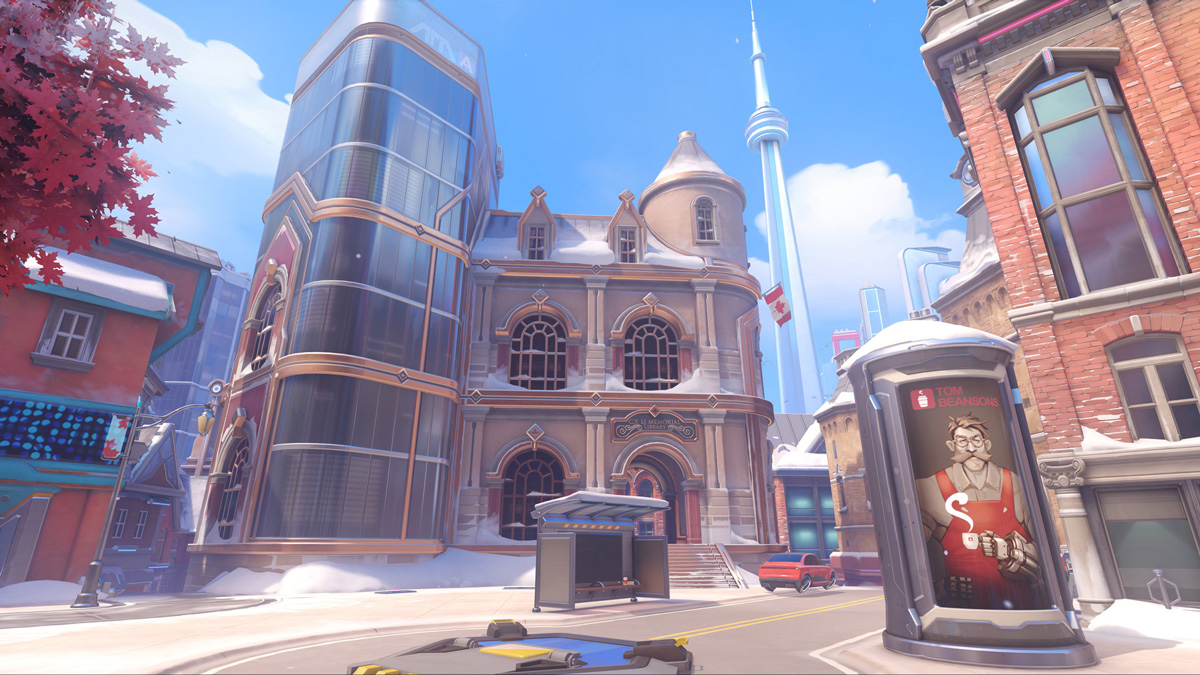 One of the first maps unveiled for Overwatch 2 has ties to its new playable hero Sojourn, being set in her home country: Toronto, Canada. This is another Push map, with a symmetrical winding design both teams have to work their way through. The objective is to find the friendly robot in the middle of the map and escort him into enemy territory - while the other team fights to do the exact same thing. During all this, the robot pushes a block forward into enemy territory, unlocking new spawn points the further along it goes.

While this concept seems pretty similar to Escort at first glance, Push games actually end up playing quite differently due to their unique maps and both teams constantly going on the offense. It’s a much-needed refresh in Overwatch’s small pool of game modes, especially considering how much that pool has shrunk with the removal of two-capture-point Assault maps like Hanamura and Horizon Lunar Colony. That being said, this was probably my least favourite new map of the bunch. I like the mode, but snowy Canada isn’t inspired enough a location next to places like Midtown and Circuit Royal to keep me coming back.

There’s some stuff here I do like though, like the cafe based on Tim Hortons and the curling rinks. It’s built like a maze, making it easy to flank enemies or get flanked yourself. It plays differently than Colosseo, which means that for now, it’s serviceable as the PvP beta’s only other Push map.