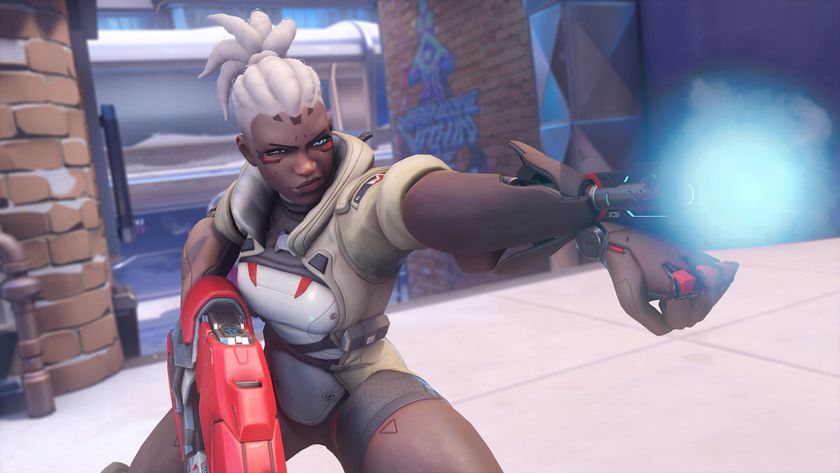 We’ve gotten our hands on Overwatch 2’s closed beta, and here’s what we think of its new Damage hero Sojourn.

Everyone’s playing Overwatch again, and it's starting to feel just like old times. Blizzard Entertainment launched the closed beta for Overwatch 2 today, and we’ve been playing it practically non-stop since. In this beta test alone, we’re seeing lots of meaningful changes to freshen up the game’s increasingly stale PvP meta - not the least of which is the first new addition to Overwatch’s roster of heroes in two years: Sojourn! 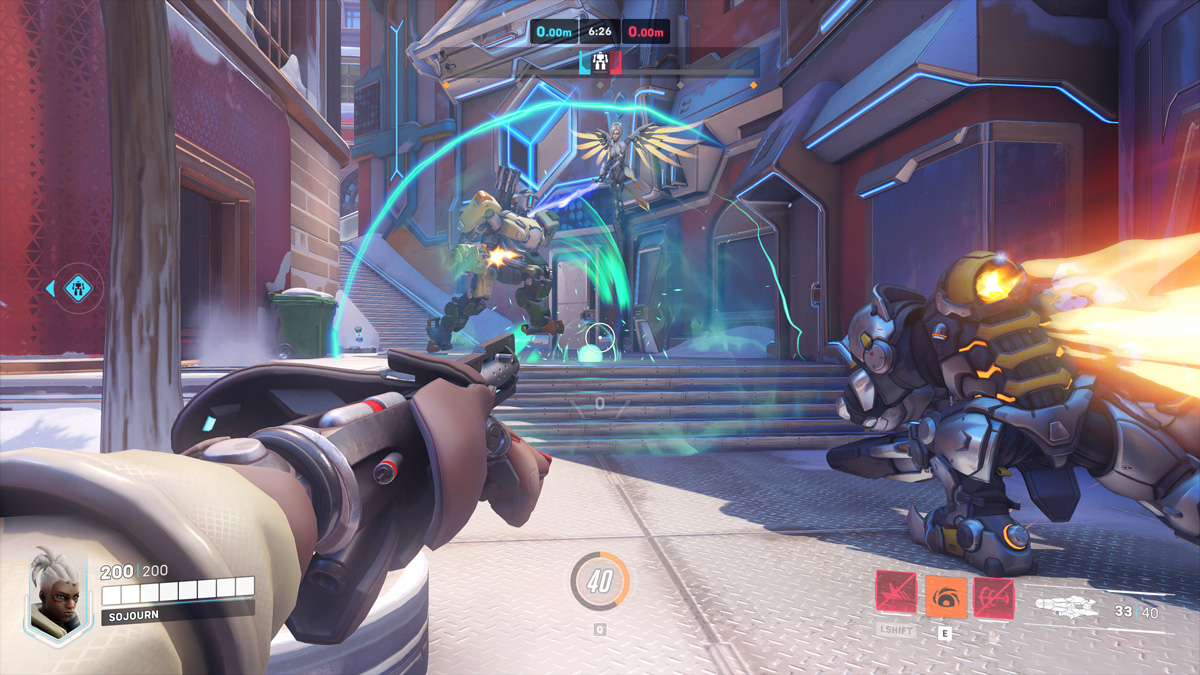 Let’s break down what Sojourn can do before we get into how she feels to play. Sojourn is a Damage hero best played at mid-range, similar to Soldier: 76, with a kit that emphasises her mobility and artillery. Her primary fire is a Railgun, which has an automatic fire that charges the gun up with every hit. That charged-up energy goes towards her secondary fire, which releases a high-damage single shot. You could build up a few of these shots and release them in succession, but their effectiveness in combat really depends on your aim.

Sojourn also has two abilities, the first of which is an AoE snare called Disruptor Shot. Triggering it releases a ball of energy that slows enemies down and eats away at their health, almost like a weaker version of Zarya’s ultimate ability. Her second ability is Power Slide, which immediately puts her in a quick slide in any direction. It can also be canceled into a high jump before it’s complete. It’s a great way to move in and out of situations quickly, or make use of high vantage points when her secondary fire is charged up.

Sojourn’s Ultimate is called Overclock, and it focuses on powering up her secondary fire. While Overclock is active, her secondary fire charges up automatically and allows her to dish out enemy-piercing rounds very quickly. It works well for big crowds, but it’s also a slower and more skill-demanding Ultimate for Damage players than, say, Soldier: 76’s. You’d have to really get all your ducks in a row before pulling Overclock out.

Was Sojourn worth the wait? 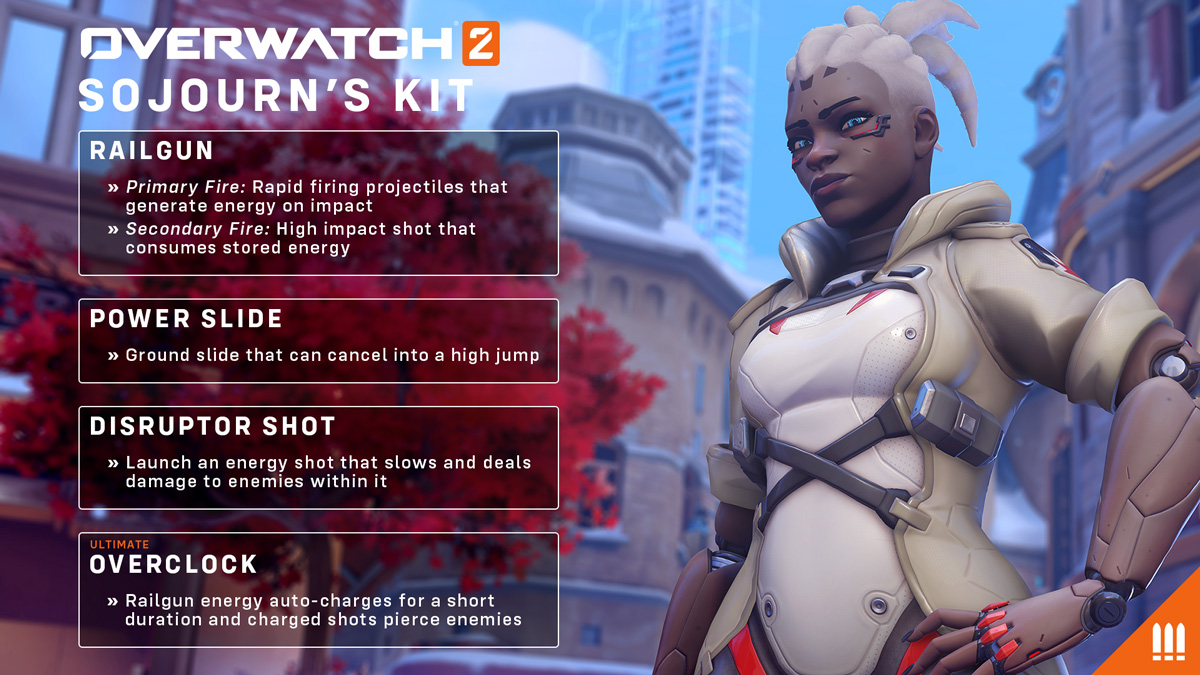 Sojourn seems like the perfect new hero to kick off Overwatch 2 with. She isn’t as demanding to learn as Tracer or as situational as Symmetra, which means that most players won’t have trouble picking her up. While her core abilities - like the railgun’s automatic fire and AoE Disruptor Shot - are flashy and simple in execution, a lot of her kit has a rather high skill ceiling depending on how much time you’re willing to invest in playing her.

Choosing the right time to Overclock could make or break a control point struggle as long as you have good aim, and the same goes for her powerful secondary fire. I had a tendency of missing a few of those shots, but they can eat away huge chunks of health when landed on those pesky moving enemy heads. If you land a secondary shot, all you have to do is switch over to Sojourn’s primary fire to finish them off. Power Slide is a great way to get out of skirmishes, sure, but it works just as well when you’re trying to get behind enemies or closer to the objective. You could also Power Slide right into an enemy while shooting, catching them off guard and recreating some Apex Legends magic right there and then.

Disruptor Shot is a little too weak to rely on for big plays, but it works really well when paired with other AoE ults like Zarya’s Graviton Surge for that extra boost of damage. It also keeps enemies away from places you don’t want them to be, and creates windows of opportunity to nail headshots on slowed down enemies. Don’t sleep on that secondary fire! It’s by far Sojourn’s biggest damage-dealer and it has no damage fall-off, allowing you to deal with enemies at long range too.

Sojourn is a lot of fun to play right now, with just the right amount of depth to make playing her worthwhile for returning players. She’s easy to pick up and play, but it takes a few matches before you start pulling off big plays and start seeing all the possibilities her Disruptor Shot and Overlock abilities have to offer. Her kit will appeal to new players as well, with her primary fire being similar enough for first-person shooter enthusiasts to get the hang of, and her other abilities giving them a little more to chew on.

That being said, I have my fingers crossed that she’s not the only hero Overwatch 2 launches with. What makes Sojourn feel accessible also makes her feel safe, and there isn’t anything here that makes her truly stand out from the rest of the roster. I’d love to see the sequel launch with more interesting hero kits, like Echo’s mix of flight and Hero-duplicating abilities. The game also needs more Support heroes desperately, given that it’s the section of Overwatch’s roster that has seen the least change in the sequel. No one’s going to flock to playing Support characters when Tank players have Orisa and Doomfist’s huge new reworks to look forward to, and Damage players have an entirely new hero to try out.

Sojourn is a good start, though. To find out more about Overwatch 2’s biggest changes and additions, check out our roundup here.

Are you keen on trying out Sojourn?