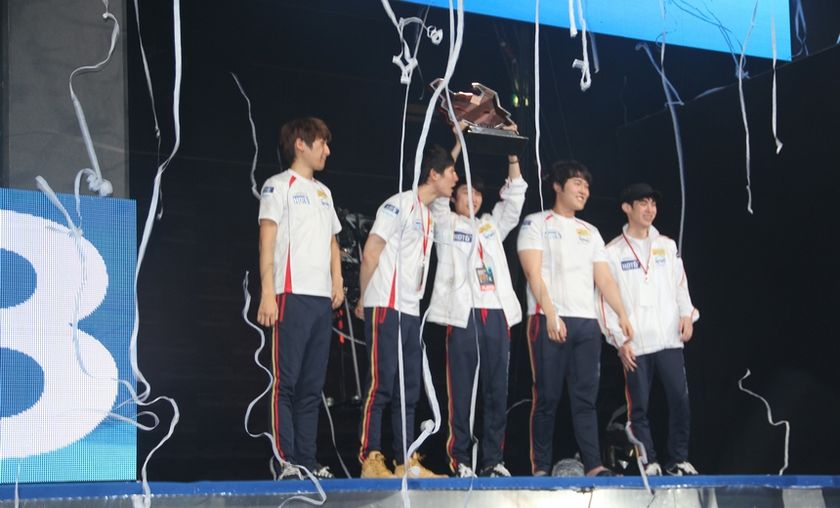 Game started with first blood going for EG after a successful rotation of Universe taking the Invoker, with Tusk unable to help and barely escaping with his life. MVP took that to mean that they have to turn the aggression to eleven and got some kills with Slark, but failed while fighting in Death Prophet’s ult leading to a 13-11 score for EG at 22 minute mark. Taking advantage of their pushing line-up and an aegis, EG pressed on for the rax top. After a prolonged fight the ranged rax and T3 tower were gone. MVP continued in the same vein, slowed down only by a courier snipe, delaying the blink dagger for Tusk. This slowly, but surely, forced EG into full rat mode, taking all ranged rax with Treants and Familiars. 50 min and another Rosh goes to MVP, with QO being beyond godlike and the score 28-30. A fight at T3 bot in EG’s base forces RTZ to buyback and with a perfectly placed Ice Shards for a quick disengage, lead EG to a terrible fight, losing Drow Ranger for a second time and their entire bottom lane. MVP wouldn’t back off and killed the Death Prophet during her Exorcism, left EG without any fighting potential. Mid rax followed and the only thing stopping MVP was that the T2 top is still up. That didn’t last long as MVP moved for it and with a final full team wipe EG caled the GG.

Game two’s first blood went to EG again, where a bot rune dispute turns bad as a Razor’s Plasma Field burns the Wisp. With the help of Enigma, EG took a lot of kills bot and managed to evade mid ganks, but a combined effort of MVP turned a push to their advantage, leaving the score even 5-5 at 7 min. MVP took Rosh and with a trade of Wisp for Nature’s Prophet they moved in for T1 bot. EG managed to defend and turn around, but the fight at T2 bot didn’t go their way. A Black Hole expended and a two for one and aegis trade, MVP finally destroyed the T1 bot. EG took a favorable fight mid along with the T2 tower and were waiting for a final pick-off of the Wisp, who relocated to save the Bristleback. This didn’t work as both of them returned and with no cooldowns left EG were forced to retreat. With all heroes respawned, MVP moved for top T1 and with a cunning relocate to the back of EG, the fight went really bad for them. MVP took both T1 and T2 top and kept the pressure on EG, forcing fights and aiming for the T3 mid. EG slowly fell apart from this and with a dive all the way to their fountain, MVP took both mid and top sets of rax, with bot left only because the T2 was still up. The relentlessness of MVP paid off and with a final fight bot and the rax gone, EG call the GG.

After a prolonged chase OD barely escaped, but Vengeful Spirit wasn’t that lucky as Fear’s Lion had boots at start and got the first blood. Both teams then settled on dual lanes, with MVP getting a kill on RTZ, but Phantom Lancer died solo mid. EG got the courier mid, with the bottle on it, in exchange for Fear’s life. The game slowed down for several minutes, until OD decided he had enough farm and MVP were at it again, with a smoke gank bot and pressure on the T1. EG managed to defend and went for Rosh, but that turned really bad for them. QO managed to dodge a Finger of Death with a well timed split, MVP wiped EG, took T1 bot and when OD respawned Rosh was theirs too. The fighting resumed mid, then moved top, with MVP pushing relentlessly, taking kills and towers. MVP couldn’t be stopped, team wiping EG, taking T2 and T3 mid and finally overextending enough for EG to step on their feet at a cost of a buyback on Invoker. MVP then resumed, like nothing had happened and casually took T2 bot, with OD going for some next level build, with Manta Style and Dragon Lance, as opposed to Rod of Atos. After a favorable fight at Rosh, MVP went for the push top, with aegis and Heart of Tarrasque on Phantom Lancer. EG managed to get a few pickoffs, but that didn’t stop MVP, with buybacks on OD and Earthshaker they came back and forced a fight for the last lane of rax bot. After losing four heroes EG called the GG and MVP took the Grand Finals 3-0.

Do you, for one, welcome our new Korean overlords?