Korean team MVP.Phoenix claims the first win of The International 4's LAN phase as they knocked out Russian team Virtus.Pro out of the competition. They will face the winner of the CIS-Liquid match-up, which is scheduled 21:30 CEST, in the finals of the wild card tournament.

Despite being touted as the underdogs, MVP.Phoenix showed composure well beyond their years as they channeled the early Virtus.Pro storm on both games, and ended up claiming a 2-0 win over their opponent.

They are now one best-of-three win away from being the final team on The International 4's second phase, while VP claims the distinction of being the first team to be eliminated from this year's LAN event.

You can catch the wildcard games in English by following this stream, while the 1v1 matches can be seen here. Russian, Korean and Chinese streams are also available.

You can also visit our wiki page for more information on The International 4.

Korean team MVP.Phoenix is well-known with their Warlock pick, which they incorporate nicely into their five-man pushing playstyle. While they were able to get it, they switched it from its usual middle-lane position and moved it into the farming lane, and they instead opted to place the Brewmaster-Wisp duo mid. VP made some interesting decisions as well, running a support Mirana and Wraith King to help out the farming Skywrath Mage.

The Russian team bared their fangs early, and they showed of their killing potential by claiming first blood against the supposedly tanky Bristleback. With good rotations and high burst damage aiding them, VP jumped into an early lead as they claimed kills after kills. By the 12th minute, Skywrath Mage was already on a monster kill streak and they have also denied both of the towers that they lost.

MVP knew that they have to group up to have shot at this game, and that they did. They were able to utilize the Primal Split and Chaotic Offering well, and they won a 4-1 team fight on the 15th minute. While that turned the game into the Korean team's favor, VP took the momentum right back when they won a 3-1 trade on the 20th minute. Tinker already has his Boots of Travel, Dagger and Dagon then, giving his team a leverage on team fights.

The runner-up from the SEA qualifier was able to sneak a Roshan kill on the 25th minute, which translated into a 2-2 trade after. More importantly for them, Bristleback is starting to be big and he is being able to tank up the Tinker. The Shadow Shaman was able to catch Tinker, and that pick-off enabled his team to push aggressively. VP was able to defend successfully this time, but MVP is starting to gain momentum.

A patient Shadow Shaman enabled his team to pick-off the two enemy intelligence-based cores, and MVP capitalized on that to take the middle lane barracks. VP was starting to lose their grip on this match, but they again showed their massive burst damage and pick-off potential as they dismantled the enemy heroes on a big 6-1 trade on the 35th minute. Aside from the middle-lane lead by MVP, the gold and experience graphs are almost identical.

VP tried to engage on Brewmaster, but they failed and got counter-initiated because of it. Failing to bring down that hero, a Primal Split and double Chaotic Offering totally turned that fight around and it ended up 4-0 for MVP. They also took down the bottom tier-2 and Roshan after that, and instantly claiming a massive gold and experience lead. With four Warlock Golems, Scepter upgraded Serpent Wards and beefed-up Bristleback, they easily climbed highground and took down the bottom lane. The Russian team called GG a few minutes later, as their enemy was on the verge of getting mega creeps. 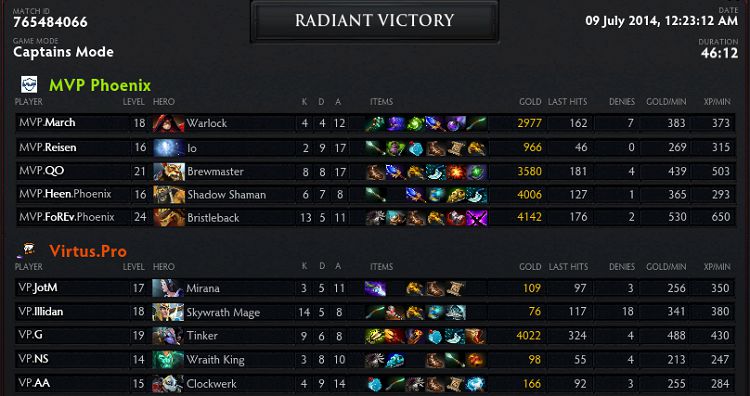 VP drafted a strong-game line-up which features a Shadow Fiend mid and a farming Dazzle, while MVP returned with their successful heroes Io and Bristleback from the last game. The Koreans took first blood this time, where they used their trilane and dived past the top tier-1 to kill Centaur.

Multiple tower dives followed after that. Centaur died again from the trilane, but not before the Enigma was dived by the Dazzle and the hasted Treant. Another multiple-hero dive was made by VP on the bottom lane, and they surprisingly won a 3-1 trade there because of sustainability with the Living Armor and Shallow Grave. Bristleback was able to get a double-kill on the top lane, but Shadow Fiend was getting farmed.

Virtus.Pro won a 3-1 trade on the 10th minute, killing all three cores of the enemy. They followed after with a 5-4 kill trade up top, and they found themselves leading by 2,000 gold and 4,000 experience after that. After that, however, it is MVP who suddenly looked stronger as they were able to get levels and farm. VP's skill-reliant damage bursts were having trouble on taking down the Tethered and Flame Guarded Ember and the tanky Bristleback. MVP won a 4-3 trade on the 16th minute behind strong team play highlighted by a Black Hole and good play by the Wisp.

It is starting to get bad for VP. They lost a 3-1 team fight as they were trying to defend their bottom tier-1 tower. A hasted Centaur also had a questionable harassment on the enemy Sandking deep inside the enemy jungle, which cost him his life and gave the enemy an uncontested Roshan.

VP traded towers on the 22nd minute, which resulted on a small victory for them. However, MVP was able to win another teamfight as they were able to force the Shallow Grave to be used on the support Treant Protector before fully engaging. It was looking very good for the Korean team as they claimed the tier-3 mid and ranged barracks, but they overstayed and ended up losing four heroes and the middle tier-2 after.

MVP was still ahead by more than 10,000 at this point, and VP was feeling the pressure because their farming Dazzle was starting to fall off. But MVP is already enjoying a comfortable lead, and the big burst of Ember lead his team into a 4-2 team fight win near the Roshan pit on the 28th minute. It translated into a middle lane barracks and the Roshan for the Korean team.

The Korean team systematically pushed down the bottom lane, with the tethered Bristleback and Eidelons hitting the tower and Ember Spirit Sleight of Fist to harass and mow down the creeps. After a big critical from Ember, they engaged and were able to bring down the enemy. Among the highlight of that engagement was a three-hero Black Hole from Enigma, which caught a Shallow-Graved and BKB'd Shadow Fiend who was channeling his Requiem. GG was called by VP not long after losing that fight. 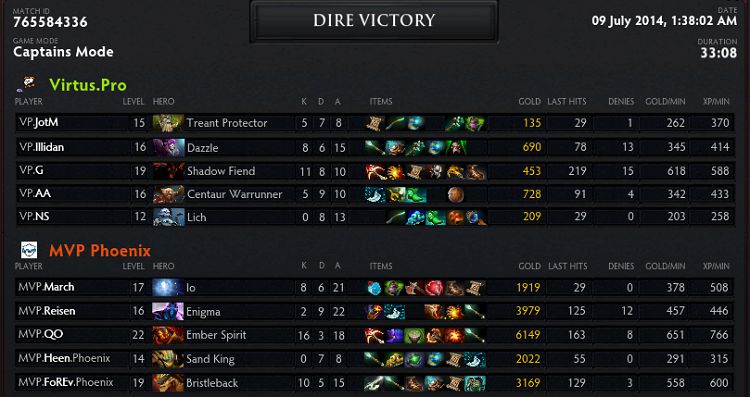