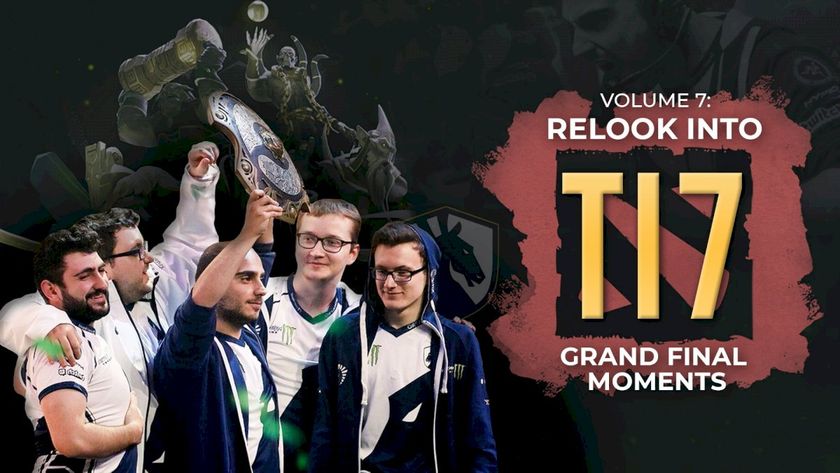 During the weeks leading up to TI10, GosuGamers will be taking a closer look back at the meta for each of The Internationals through the years. This week is TI7.

In our journey looking at the metas through the grand finals of The International championships, we arrive at the station where one of Dota 2’s longest serving and most well recognized players finally got his name immortalized. The station, of course, is The International 2017 or TI7, and the player, none other than KuroKy.

TI7 was held at the Key Arena in Seattle, and would be the last iteration of The International championships to be held there. The prize pool for the tournament, thanks to the TI7 Battle Pass, had gone up to nearly $24.8 million from $20.8 million from the previous year. The winners of TI7 were destined to get the same percentage as the winners of TI6 – 44%, which came out to be a little over $10.8 million.

The format for TI6 was pretty much the same as TI5. There were a total of 16 teams-

The two groups had 9 teams each, with every team playing a best-of-2 against every other team in their group. The top four teams went to the upper bracket, while teams 5 to 8 went to the lower bracket. The last team from each group was eliminated, which was something new that was introduced at TI7. But in fairness, there were 18 teams at TI7 as compared to the usual 16 at the Tis before.

Newbee made it to the grand final with some insane displays of Dota 2. They had dropped just one series, 0-2 in the group stages against LFY, and had even exacted revenge for that in the upper bracket final against their Chinese compatriots. Whoever went up against them were in for a tough challenge.

Team Liquid were touted by many to take the Aegis, but after their first round upper bracket loss to Invictus Gaming, it seemed like it might not be their year. But they fought their way through the lower bracket, until it was them against China in the last four of the tournament. Being one game away from elimination thrice through their run, Liquid somehow managed to pull off their best plays in the situations that mattered to make it to the grand final to face Newbee.

Going from TI6 to TI7, Dota 2 experienced some of the biggest changes it has seen going from one TI to the next! TI6 was played on the Dota 2 6.88b patch, while TI7 was played on the 7.06e patch. The time between the two TIs saw the jump from patch 6.88 to 7.00, with the introduction of Monkey King, talents, shrines and a lot more! The gold and experience formulas were changed and the Roshan pit was relocated. Let’s take a look at the general changes in that period that would have the biggest impact on the game.

●        Shrines added in game (for TI7, every team had two shrines in the jungle and three in the base)

●        Added an extra melee creep in mid lane for the first 15 minutes (until the first upgrade wave at 15 minutes, at which point all lanes have the standard extra melee)

Starting from patch 7.00 and going to patch 7.06 was a huge sea of change in itself (in comparison to going from patch 6.88 to patch 7.00). There were a lot of things that were introduced and IceFrog was testing the waters to see what would be good enough to make it to The International.

Talents and Shrines were no doubt the biggest additions to the game. Talents allowed heroes to explore new pathways to progression and maybe even switch the roles for which they were built. It added an additional parameter to the beautiful game and revolutionized it completely. It also provided IceFrog and Valve with a different metric to balance heroes with, rather than just skills and stats.

Shines made taking the high ground an extremely challenging task. Initially, there were five Shrines in the base, but looking at the long game times at Dota 2 Asia Championships (DAC) 2017, these were brought down to three. Shrines also changed the way the mid lane and offlane were played, because the availability of Shrines nearby enabled players to make decisions that previously might not have seemed too clever.

Another factor that had made games slower was the fact that neutral creeps spawned every two minutes, instead of every minute. That was reverted back in patch 7.06, which helped increase farming rates.

But the change that possibly helped Team Liquid the one that introduced an additional creep in the mid lane for the first 15 minutes. It was a change, the likes of which had never been seen before, and a small one that had the potential to have an enormous impact. There was a patch between 7.00 and 7.06 where all five heroes on a team would end up making Hand of Midas – the game had become extremely slow. The reason for this change could have been to increase the game speed by making it less passive and more dynamic in the early stage by giving mid heroes the ability to hit level 6 before the 6 minute mark. While it did do that, it also put a lot of emphasis on the mid lane, because it meant if the mid lane was lost heavily, the opposition mid hero could snowball beyond control. This caused supports and sometimes even other cores to come to the mid lane early in the game to gank the opposition hero(s), and in all that chaos, Team Liquid thrived! They had two players in Miracle and Matumbaman who could switch between the safelane and the mid lane, and one of the best roaming supports in the form of GH.

The ban and pick phases for Captains Mode was one prominent thing that did not see a change going from TI6 to TI7.

●        Team Liquid had had a bad overall season. While they did manage to win a tournament or two, their performances in the Majors and DAC 2017 were not the best.

●        KuroKy had attended all TIs from TI1 to TI7, although it had been a stroke of luck in TI2, as he had been called up to be a standin for mousesports.

●        Faith was a former TI champion, winning with Invictus Gaming in 2012 at TI2. He was competing to be the first player to claim the Aegis twice.

●        In every game of the grand finals, a team either had first pick or the Radiant side, showing that those were the priorities.

●        Io, Earth Spirit and Nightstalker were banned in all games of the grand finals. 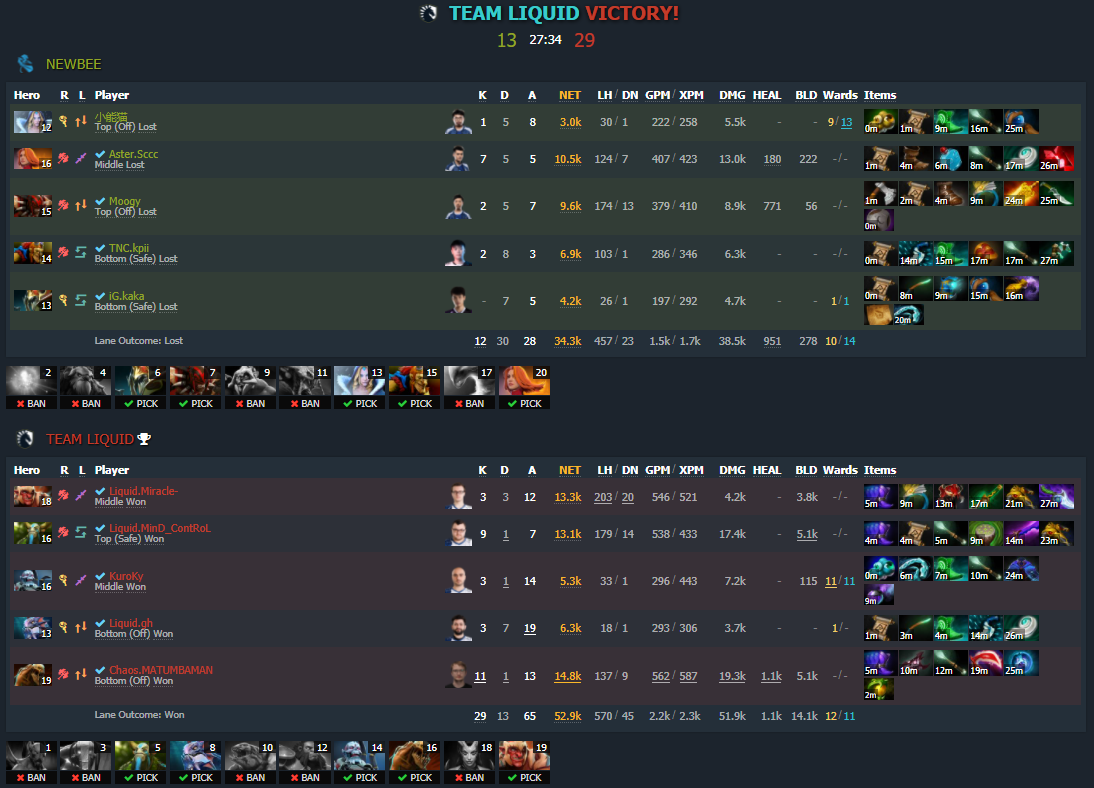 There isn’t too much to talk about the games, as Team Liquid, although shaky at times, were never in a position to lose a game. In all three games, they did not lose a single Tier 3 tower, which is a good indicator of how much Newbee got outplayed.

Team Liquid picked Nature’s Prophet in the first phase, because not only was Mind Control a beast on that hero, but it also offered a tool to make early rotations to secure the mid lane. Additionally, Mind Control was more than comfortable in taking the mantle of the position 1 hero in a game when required, which just added to Team Liquid’s versatility. NP got banned in the next two games.

None of the three Liquid cores built any farming item this game – no Battlefury or Maelstrom. The reason for that was it was a meta oriented more towards fighting, and items like Diffusal Blade, Armlet of Mordiggian and Desolator helped with that.

Liquid raced off to a strong start in game 1, with an early 8k net worth lead, and even though Newbee showed some resistance at times, Liquid’s three farmed cores were too much to match. 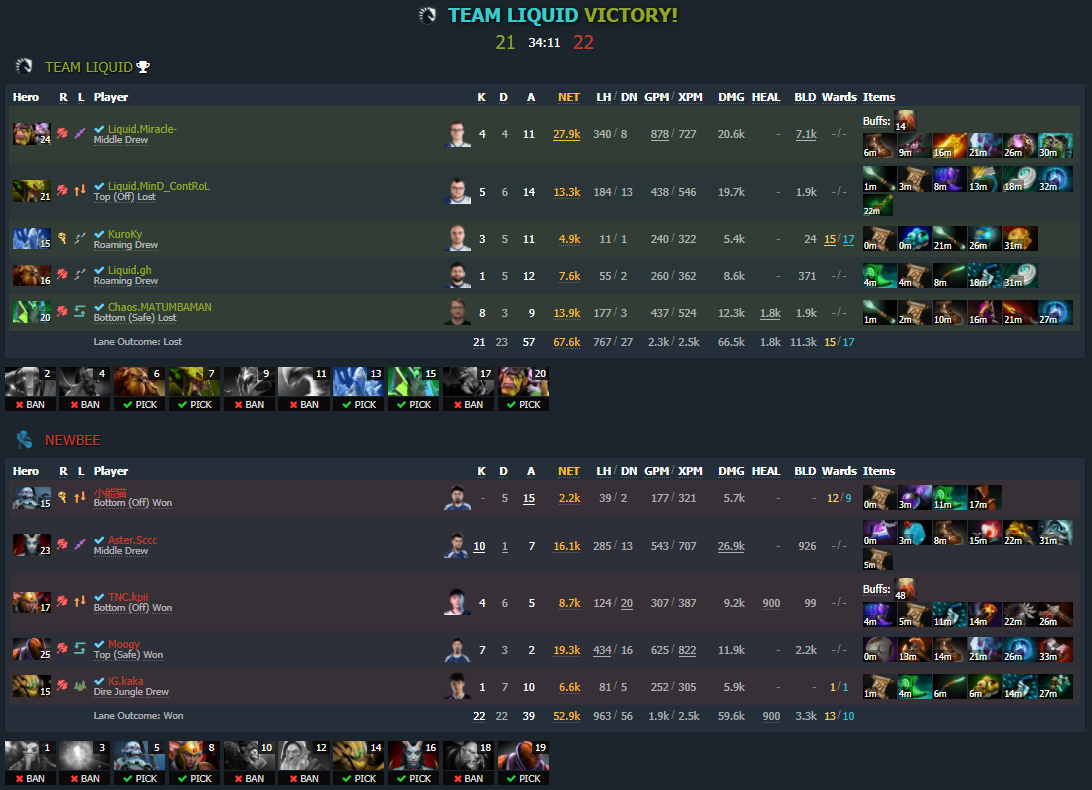 In game 2, Newbee got off to a flying start, going up 10-0 in terms of kills. But Liquid clawed themselves back in the game with the power of the Alchemist, and took the game in only 34 minutes. The power centers shifted quite quickly, ensuring the game didn’t go on for too long.

This game was an indication that even though the meta had been shaped for early fights and snowball mids, it wasn’t like the TI4 death ball meta, where comebacks were near impossible. The new gold and experience formulae permitted teams who fell behind early in the game to have a chance of turning the tides. 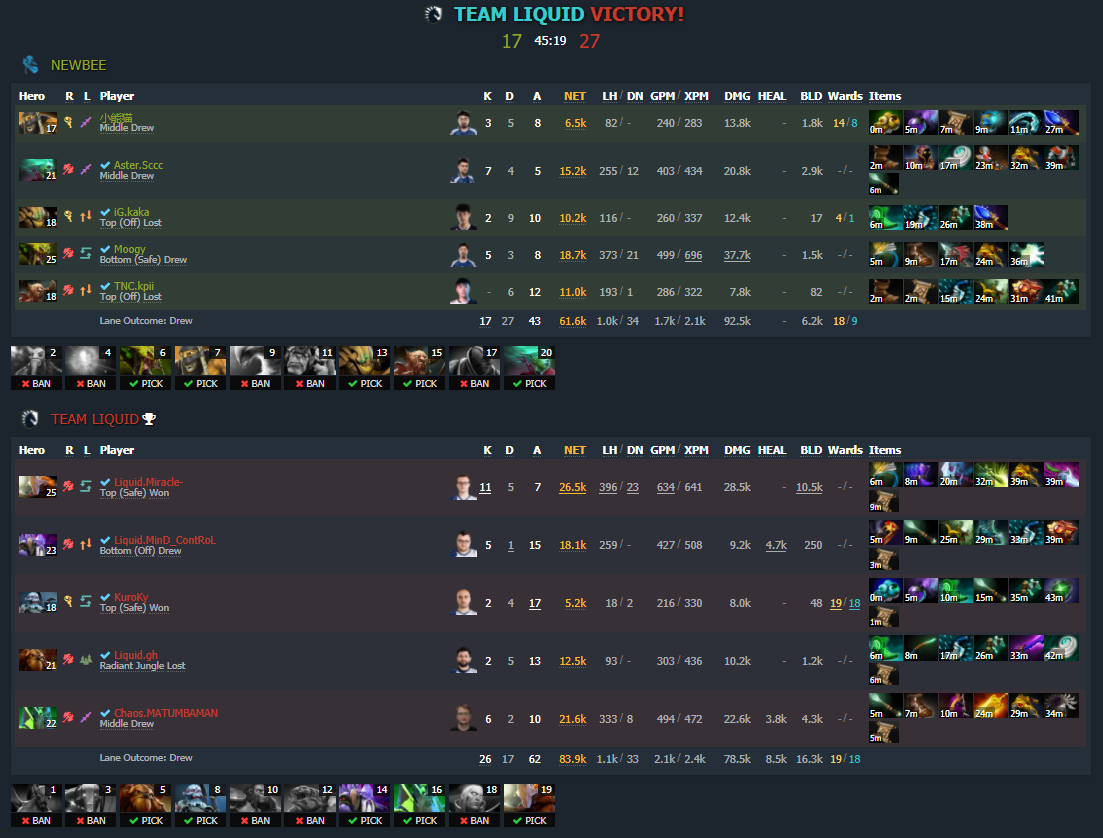 Miracle played in the mid lane for the first two games, and then shifted to the safelane in game 3, with Matumbaman taking the mid role. Game three was the closest game of the series, but two well executed fights near the Roshan pit by Team Liquid were the decisive factors that tipped the scales in their favor.

Here again, the intent to fight is evident for Liquid, with Miracle’s Juggernaut forgoing a Battlefury or Maelstrom to go straight into the Manta Style-Diffusal build.

Liquid clinched the game in just over 45 minutes to complete the first wash out in a TI grand final, and also kept the tradition of the Aegis alternating between the West and China going.

Team Liquid’s GPM was comparable to what we see in today’s day in age, although we might see it in the 2400-2600 rage for modern day tournament winners. Newbee’s average GPM wasn’t helped by the fact that they couldn’t manage to take a single game in the grand finals, and a meta more suited towards fighting rather than farming hampered the overall GPM.

With that, we come to the end of the deep dive into the grand finals of TI7 to see how the meta and playstyle compare to that of today. Next week, we’ll take a look at the contest between OG and PSG.LGD in the TI8 meta analysis, in what was one of the best TI grand finals ever, and can only be matched by the series between Alliance and Na’Vi in the TI 3 grand final. 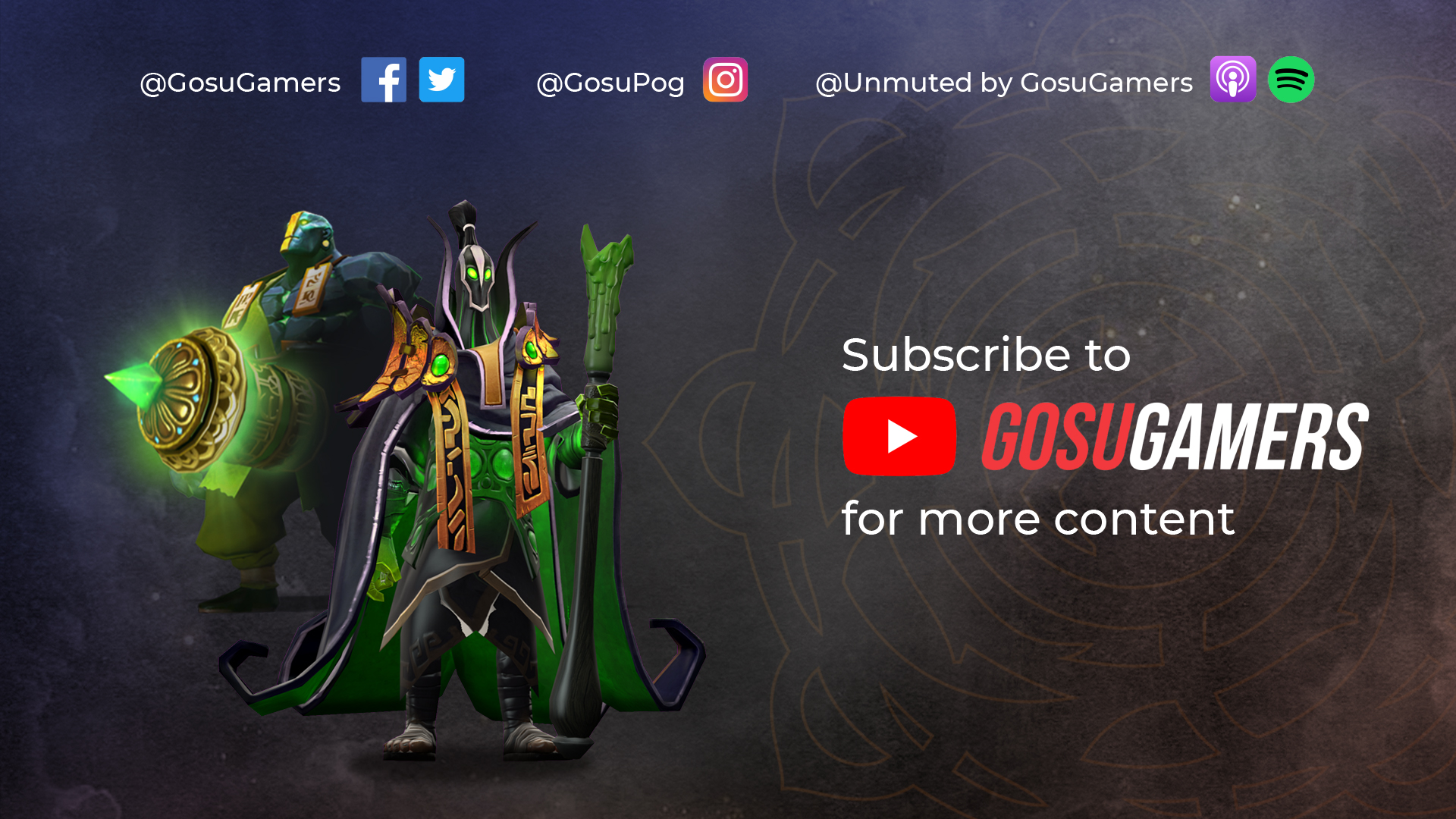 Did you expect Team Liquid to make the long run from the lower bracket to the Aegis?