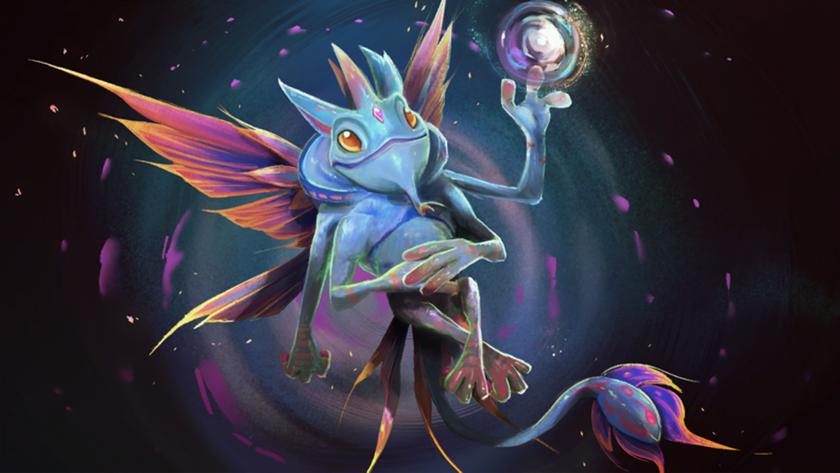 A few heroes stood out in the first four days of the ONE Esports Singapore Major, which had total a of 87 games played.

The first four days of the ONE Esports Singapore Major have produced some quality Dota 2 action, first in the wild card games and then in the group stages. A total of 87 games were played over the four days (that’s a lot of Dota!) and we bid farewell to three teams in the wild cards – AS Monaco Gambit, Nigma and T1 – and then to Alliance at the end of the group stages.

A total of 12 teams now remain; seven that have qualified through the group stages and five who topped their region’s DPC League (Beastcoast from South America could not make it). As we head into the playoffs of the first DPC Major of the year, let’s take a quick look at what heroes dominated the first four days of the event.

The list shows the 10 most picked heroes of the Singapore Major so far (well, 11 as the last spot had two contenders). It is no surprise that Puck and Void Spirit top the list; the two heroes are picked or banned in nearly each game. Even though they are viable in all lanes, most of their deployment has been in the mid lane. The big difference though, is in their win rate. Puck nearly has a 62% win rate while Void Spirit is languishing at just over 44%.  A lot of heroes on the list are below 50%, with the highest ones being Monkey King and Phoenix with staggering win rates. It’s not the biggest of surprises though, as both these heroes have been performing well throughout the 7.28 patch.

Dota 2 statistician Ben "Noxville" Steenhuisen mentioned on Twitter how Puck was ignored in just three of the 87 games. One of those was the last game of the group stages, which would have no consequences on the result. 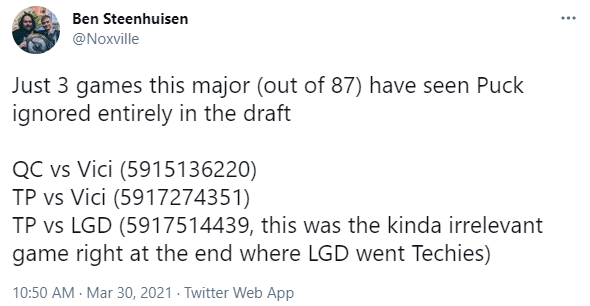 A look at the five most contested heroes in the game tells the story of the heroes that have been on the mind of nearly every team. Puck, Io and Death Prophet have a contest rate of over 90%, meaning there have been very few games when they have either been picked or banned. All three heroes are flexible as core or supports, but the most flexibility is currently held by Death Prophet, who is being played in every position from mid to hard support (position 2 to position 5).  Puck and Io have a win rate that makes a case for their popularity, which is also the case with Timbersaw, although he hasn’t been picked in too many games.

An interesting      thing to note is for the top three heroes, the majority of their picks and bans have been in the first phase. If a hero does not get banned in the first phase, teams are picking it up right away without hesitation, not having any fears about being counter picked. Their flexibility also gives teams the chance to alter strategies late in the draft if needed.

The list below shows the top 10 heroes with the highest win rates (at least 10 games). Although some of these heroes don’t have too many names under their belt, in the right situation, heroes like Elder Titan, Terrorblade and Shadow Shaman seem to have a high impact. Terrorblade has proved to be a clutch last pick in a number of games in the group stages. With tournament lives on the line in the games to come, teams should be on the lookout in case some of these heroes sneak up on them.

The surprise of the tournament so far has been Alchemist. Tried out as a core and as an offlane hero, Alch has failed to make a mark at the Major with just two wins in 13 games. It will be interesting to see if teams opt to pick or ban the hero in the playoffs. Even though he has an abysmal win rate, he is the sixth most banned hero with 44 bans to his name.

The first set of games of the playoffs have been played and four teams - Evil Geniuses, Invictus Gaming, Team Secret and PSG.LGD -  have advanced to the upper bracket semi-finals. The next four days will see a total of 13 best-of-3 series being played and one best-of-5 grand final. Even though the number of games will be lesser than the initial four days, the stakes are higher and one mistake in drafting could be the difference between advancing to the next stage and going home. The competition is getting stiffer and teams are bound to do their homework on their next opposition. The eliminations will begin today, on the second day of the playoffs with the commencement of the lower bracket games, when four teams will be eliminated from the ONE Esports Singapore Major.

Which hero deserves to be hit by the nerf hammer harder in the upcoming 7.29 patch?