Shortly after the mirroring Reaper openings, Fantasy went on a full harassment rampage. Hellion and Hellbat drops terrorized Taeja’s mineral lines and inch by inch, the SKT Terran was edging into an advantage. Said advantage was lost in a singular swing, however, as Fantasy misjudged a battle and lost the majority of his forces to a Marauder/Tank squad and as a result had to let his fourth die.

After stabilizing, though, the Hellbat nightmare was reinitiated. Taeja was losing SCVs everywhere without mustering any proper response. 100 workers were killed by the 25th minute and the Liquid ace was in deep trouble. Once he found his fourth under siege, it was lights out for Taeja. 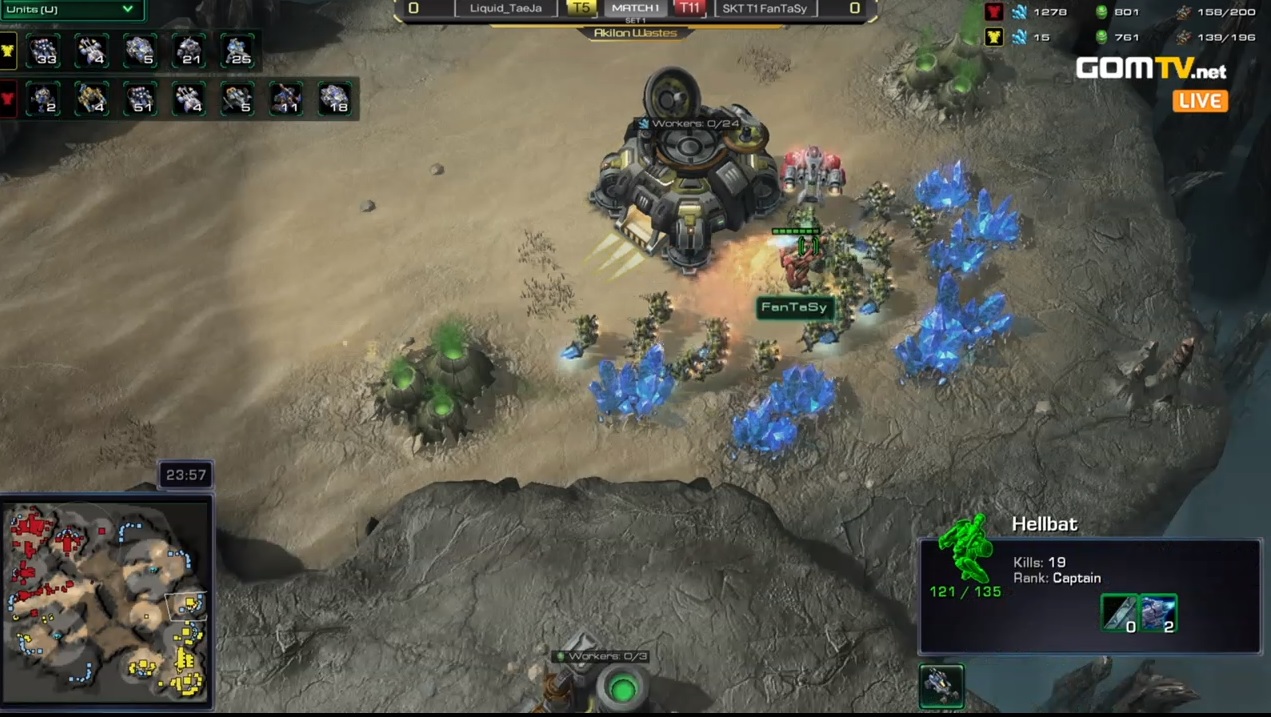 A lethal 2-rax Reaper build by Taeja tied the score and the series went into game three, a match that would prove to be absolutely heart-stopping. Channeling his BroodWar mastery in mech, Fantasy quickly secured a 3-base presence and he started pushing the bio of Taeja back but an ingenious switch to Skyterran flipped the tables. Shoved deep into his side of the map by Vikings and Banshees, Fantasy suddenly had very few places to mine from and Taeja was expanding everywhere.

Losing the economy war, Fantasy’s choice was to avoid Taeja’s army instead of fighting it and pierced through the map, establishing a position at Taeja’s natural. At the same time, Taeja did the same and easily shot down the BC transition of Fantasy, making the game essentially a base race.

In the final minutes before the game, none of the players had a stable economy and it all turned into a battle for resources. Fantasy’s mech and its cost efficiency allowed him to maintain a presence for a long time but it was Taeja who first managed to secure a mining base. Preventing Fantasy from doing the same, the Liquid Terran took the series after an exhausting game three.

In the second mirror of the day, Losira and TRUE engaged in a short and explosive ZvZ. Taking the offensive side, TRUE delivered early pain to Losira’s mineral line and ended him with a Roach follow-up but the IM Zerg quickly learned to properly react to this playstyle. On Daybreak, Losira stood his ground against a massive Baneling all in and ended TRUE with a counter-attack to tie the series.

Not giving up on the aggression, TRUE tried to make plays with early Lings and Banelings once again but despite cancelling Losira’s expansion, TRUE was still behind in economy. Once he stabilized, Losira got a Baneling nest of his own and rallied massive number of troops down TRUE’s way to deal damage of his own.

As neither player died during the ground battles, however, both put their Spire techs in motion and once again Losira’s sense of timing was superior. Deciding to delay +1 air carapace to get a few more Mutalisks out, Losira hit just before TRUE’s own upgrade could finish and won the air battle uncontested. A 2-1 victory for the IM Zerg. 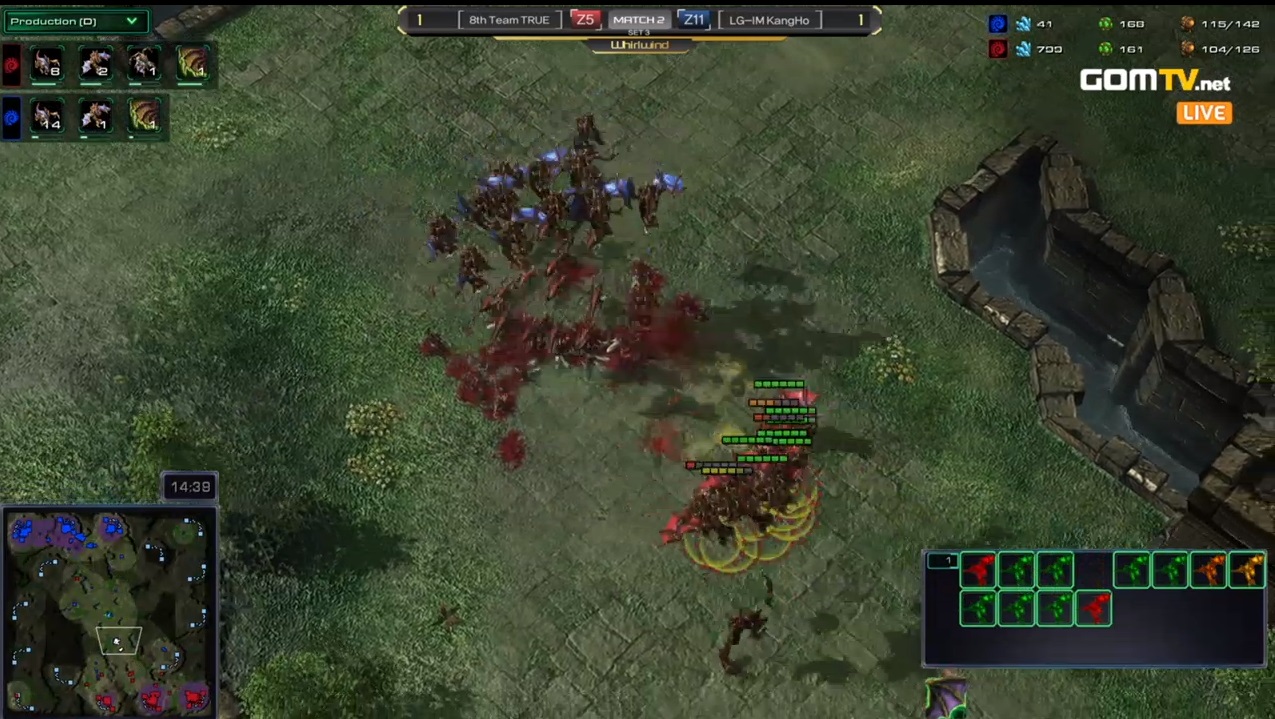 Taeja and Losira did their best to make the first non-mirror match for the evening thrilling. Like Whirlwind games often do, the opening set went deep into the mid-game with Losira establishing a scary Ultralisk/Infestor army but there was one thing lacking: anti-air control. Using Medivac drops to the maximum, Taeja was a nuisance to the point of wiping critical Zerg tech and mining bases and winning enough time to accumulate an army that can take the game.

Losira quickly adapted and tied the score on Bel'Shir Beach after shutting down the air threat of Taeja and wiping the floor with him with the same Ultralisk/Infestor composition. 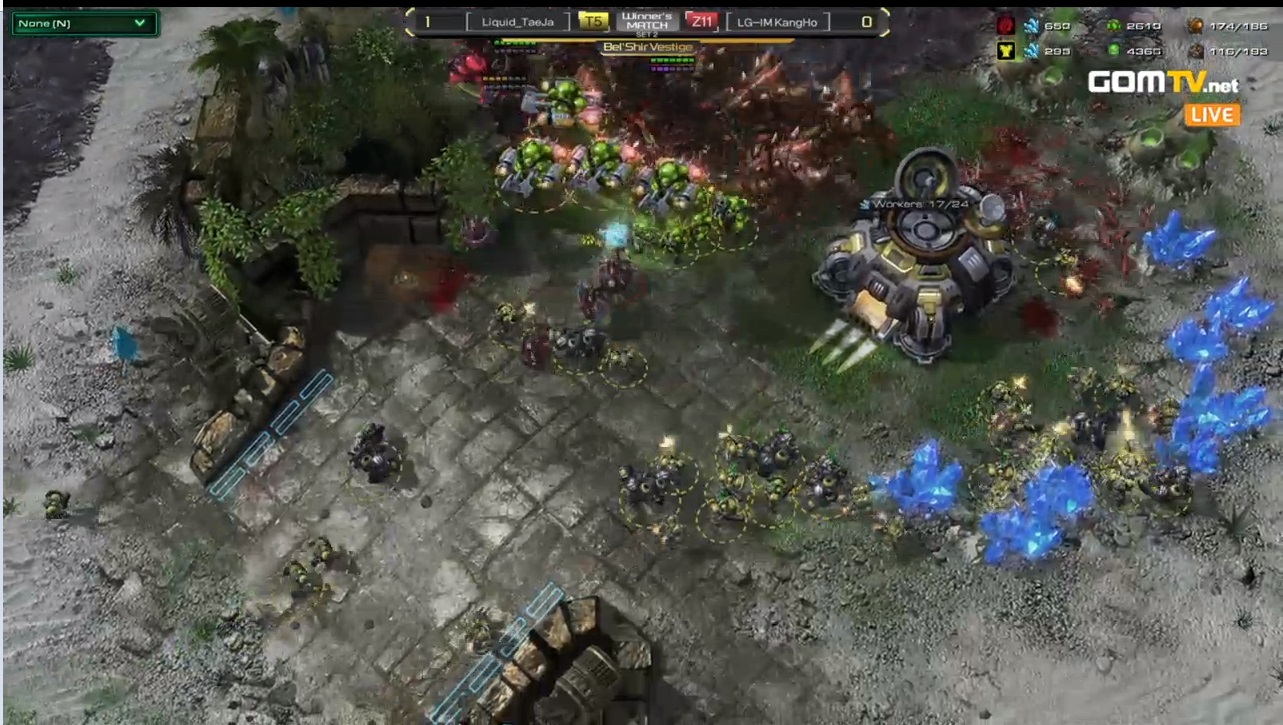 While Taeja did not give up on his drop style, it was his micromanagement mastery that won him the final game. After surviving the early-game Ling raids, Taeja stabilized and went against Ultras for the third time only to give a lecture on how to kite against Hive tech Zerg army. Not able to get any connections and losing way too much units, Losira tapped out.

The tempo of the games was picking up tangibly and TRUE and Fantasy played what could very well be the most entertaining match since the start of the season. True to his aggressive style, the Zerg rallied an endless string of Banelings down Fantasy’s way and by the 25th minute, more than a hundred of them had died. For all intents and purposes, the game seemed over.

Only Fantasy had a different take on this and putting his micro to great use, the Terran almost made the most unbelievable comeback. Abusing Medivacs and Widow Mines to the maximum, Fantasy stayed in the game way longer than everybody expected and almost came on top after many small army engagements but TRUE finally was able to shut him down with Mutas and Lings.

The blood rush continued on game two and TRUE took a massive Baneling all-in to Fantasy’s face but an early Siege Tank and a brave Hellion squad negated the Zerg attack and soon thereafter the game was tied.

Fantasy was put on the defensive for a third time as a Nydus/Roach attack by TRUE cleaned up a lot of stuff but it didn’t take long for Fantasy to stabilize. The swarms kept growing and growing and Fantasy was soon overwhelmed. Nevertheless, like in game two, the SKT Terran did manage to survive for longer than expected (hence the newly born “Fantasy GG timing”) but eventually he had to admit defeat. [Final match] TRUE vs Losira
In an absolutely anticlimactic ending, Losira advanced to the Round of 16 over TRUE after two incredibly short, rich-on-Banelings games. Not letting TRUE to take control like in some of his previous games (and knowing that he’s beaten the KeSPA Zerg before), Losira went on early aggression himself and crushed TRUE in a decisive, one-sided manner. The two elephants were dead, Losira and Taeja advanced to the next round. 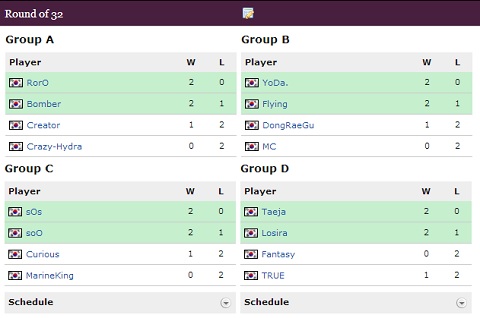