DK still alive in the battle of G-1 League

BurNIng's boys managed to stand their ground against Chains Stack, securing third place and the possibility of advancing to the LAN finals of G-1 League. The games continue tomorrow with LGD.cn going against Rattlesnake.

Group B was not as surprising as Group A when it comes to game results, but the last two games are always important for the outcome of the tournament. With DK standing their ground against Chains Stack, they managed to secure the third spot in the group, and they are still alive in the fight for the ticket to the LAN play-offs of G-1. DK will find out their next opponent tomorrow, as the match between LGD.cn and Rattlesnake will decide the team that earns the third spot.

When it comes to the second group of Phase 3, the first and second place will be decided on Sunday, with the clash of titans, iG vs Zenith. 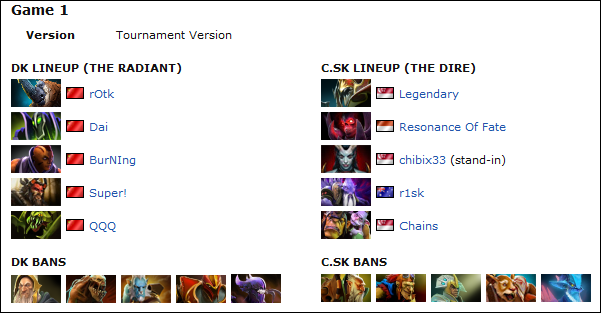 DK decided to gamble, and used a similar 4-protect-1 strategy to the one they used against Zenith. Chains answered with strong early-mid game line-up with Alchemist as their carry.

Both teams were pretty defensive for the first minutes of the game, with BurNIng completely free farming bottom, while Chains was protected by two supports and the Dark Seer, who also farmed inside the Dire jungle.

DK decided to go aggressive, and launched an attack against Queen of Pain. Shadow Demon, who rushed in to help Queen of Pain, was eventually taken down by Beastmaster, giving the first blood, as the game hit the 10-minute mark.

Both carries abused their safety to farm extremelly well. BurNIng finished his Battlefury before the first quarter of the game, destroying both bottom outside towers as well. Alchemist made a quick fortune as well, buying Midas and Battlefury spectacularly fast.

As soon as bottom tier-two went down, DK gathered up and moved as five, assaulting Alchemist to disrupt his farm. Chains Stack decided to respond, and a big clash took place next to the top tier-one, resulting in a 4-1 fight won by DK. This helped Anti-Mage get a 20-minute Manta Style.

Chains Stack, dazzled by their loss of map control, decided to push, forcing a fight in the middle of the map. DK completely dominated the battle, fully wiping their enemy, losing only Magnus in exchange.

Anti-Mage picked up Black King Bar and Butterfly, and DK emerged to finish the game, visiting the Rosh pit and then pushing middle. With Alchemist being picked-off extremely easy two times, Chains realised the game had slipped from their hands, and they called the game. It took 31 minutes for DK get their first win in Phase 3. 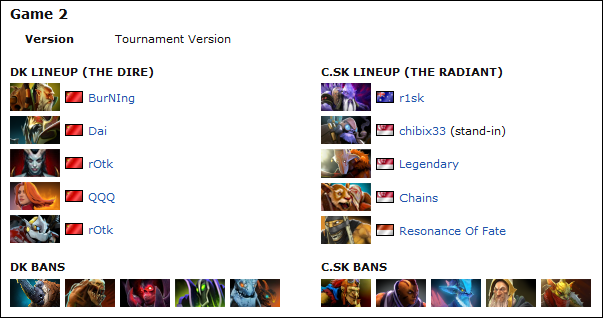 Chains Stack selected heroes with high mobility, such as Tinker and Dark Seer, and Brewmaster for their middle lane. DK answered with a line-up based on strong initiation and heavy nukes.

The fights began fast, with Queen of Pain dying to the enemy trilane. No assistance was received because DK's supports were occuppied, chasing Dark Seer inside their forest. He managed to escape just barely, due to the use of a healing salve.

Both teams managed to score some kills early, but DK abused their strong pushing line-up to destroy many towers during the first 10-minute period. Chains attempted to pressure middle, taking down the tier-one but losing three heroes in exchange.

A clash took place shortly after, ending 2-1 in favor of DK, who then killed the first Roshan by minute 20. The Chinese then decided to make their push even stronger, forcing a new fight three minutes later. The fight was a massacre for Chains Stack, with only Tinker surviving thanks to his Boots of Travel.

DK managed to build a strong advantage, and kept demolishing the remaining tier-two towers with their persistent pushing. Chains Stack put a lot of effort into their defense, but their line-up could not handle the fortitude of their opponent.

Half an hour had passed when DK visited the Rosh pit to seal the deal, winning a 2-0 fight shortly after. Chains Stack were imprisoned inside their base, unable to react. 36 minutes on the clock, DK marched inside the Radiant base, and Chains surrendered a few seconds later.

G-1 League Phase 3 group stage concludes this weekend, with RattleSnake and LGD.cn battling on Saturday, while the much anticipated match between iG and Zenith will take place on Sunday. Both games are scheduled to begin at 13.30 CET on their respective days.


G-1 League Coverage Hub
Check link for brackets, and tournament format
Andreas “drouks” St
There's really not much to say about Andreas 'drouks' Stavridakis, except that he sleeps two hours a day, plays the guitar and survives solely on Diet Coke. He also writes about DotA sometimes.
Share Tweet
1 people reacted to this post