Virtus Pro beats Fnatic.eu 2-0, with Airman's Gyrocopter farming up a Divine Rapier to achieve an amazing come back in the second game. VP has beaten Fnatic.EU for the fifth time in a row in the past month. 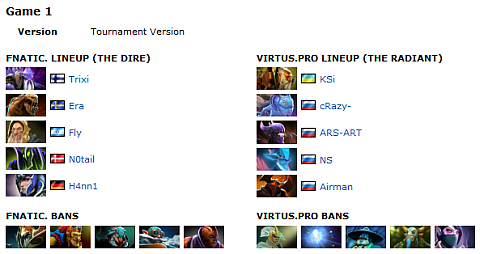 The game started in a comical fashion. NoTail's Rubick sacrificed first blood in order to drag Lone Druid's bear up upon the high ground, forcing Lone Druid to play extremely defensively without his Spirit Bear on the long lane. In the early game, most of the action occurred in the middle lane with Naix trading blows with NS's Leshrac which definitely favoured Virtus Pro.

The match really kicked off when Virtus Pro's Puck and Bane elemental got level six, setting up ganks on both the bottom lane and the top lane. At the 16th minute mark, Virtus Pro three men ganked Luna farming in the jungle. Fnatic.eu tried to counter the gank with the rest of the team initiating on Chaos Knight, a hero that was just too tanky to be taken down immediately, also Naix was easily kited around by Bane Elemental casting Sleep. Fighting four versus five, Fnatic.eu got team wiped without any casualties from Virtus Pro. The score became 10-6. Despite Fnatic.eu being behind, Fnatic.eu still managed to sneak Roshan around the 25th minute. With an Aegis on Naix, Fnatic.eu forced a battle; however the fight turned out to be in favour of Virtus Pro's, destroying four Fnatic.EU heroes plus the Aegis.

Both teams camped around the Roshan pit as second Roshan was about to revive. But there was no way Fnatic.eu had a chance in getting their hands on the Aegis as Chaos Knight just charged through the Fnatic.eu line-up killing any hero in his way. Virtus Pro then followed up by taking top barracks. Soon after a quick GG was called from Fnatic.EU 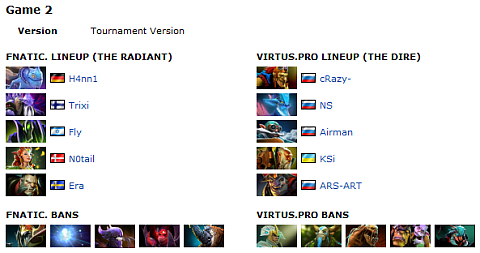 Fnatic.EU picked up a very strong pushing lineup against a ganking orientated line-up from Virtus Pro. Fnatic.EU got off to an aggressive start with NoTail's Enchantress helping Lycan and Rubick to get the first blood on Lone Druid although it came at the cost of both carry Lycan and Rubick. Fnatic did manage to take down two top towers.

The Fnatic.EU pushing and team fight power really took effect during the mid-game. The early Mekansm on Dark Seer in combination with Enchantress' heal really helped Fnatic's squishy supports survive in team fights. Fnatic.EU managed to take down fast towers every time after winning a team fight. By the 14th minute mark, Virtus Pro had no outer towers left. With little map vision from Virtus Pro, Fnatic.eu took an uncontested Roshan by the 19th minute.

Virtus Pro took Roshan around the 29th minute straight after they successfully defended a questionable five men push from Fnatic.EU.. Virtus Pro decided to slow down the pace of the game utilizing the Radiance on the Spirit Bear. Airman's Gyrocopter soon farmed up a Divine Rapier and Virtus Pro quickly smoked up for a wrap around on Fnatic.EU. The damage from Gyrocopter completely annihilated the Fnatic team.

In the late game Virtus Pro took an easy third Roshan, with an Aegis on the Rapier Gyrocopter and Cheese on the Lone Druid, Virtus Pro simply went for the GG push. Wiping out the entire Fnatic.eu team as well as taking all the barracks, Mega creeps spawned. Fnatic.eu called the game on the 44th minute. 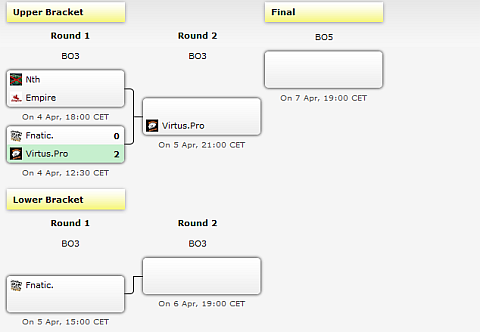 With the win, Fnatic.EU did not get their revenge for their recent loss in the grand final of The Defense 3 against the Russians. They are currently on a 0-5 losing streak against VP.

Next up on StarLadder Star Series V is the game between NoTidehunter and Techlabs Cup champion, Team Empire. The best-of-three match-up will begin at 18:00 CEST.

All the Star Series games will be broadcasted live by TobiWan and Sheever. The Russian stream will be provided by StarLadderTV with v1lat and CaspeRRR and mtrx4u.